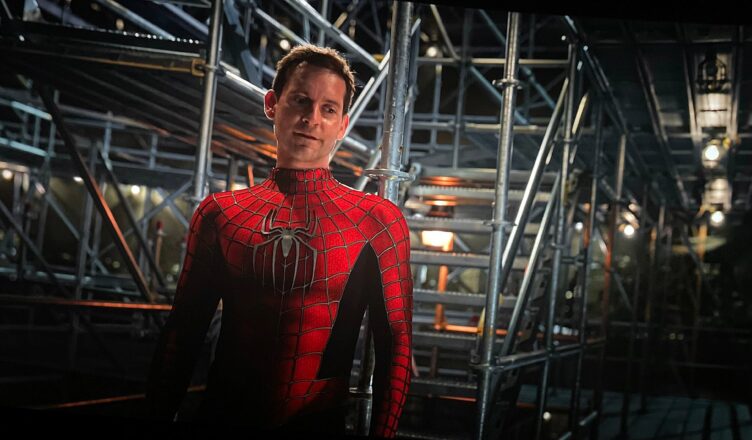 Spider-Man No Way Home is a massive film and a massive success. Sam Raimi is a beloved director and directs the original trilogy of Spider-Man films. A fan-favorite aspect of the movie is the return of characters from prior iterations of the character. I certainly enjoy seeing Tobey Maguire suit up again as Spider-Man and I hope to see more. I am sad to learn that a cool scene was cut from No Way Home and doesn’t appear in the final film. A fight scene between Tobey Maguire’s Spider-Man and Willem Defoe’s Green Goblin gets cut from the final movie.

The No Way Home featurette “Three Big Bad” includes behind-the-scenes footage of the film, including one brief moment where the Green Goblin and “Peter-2” (Tobey Maguire’s iteration of Spider-Man) stand atop the Goblin Glider in the middle of a fight. No such scene made it to the film’s theatrical cut, which is disappointing since Andrew Garfield’s “Peter-3” had moments where he clashed with (or spoke to) his universe’s villains, while Holland’s MCU Spider-Man had extended fights with two of the Sam Raimi-era villains.

I would love to see these two fight it out some more. Willem Defoe’s Green Goblin is my favorite spider-villain so far. His character return is everything I hope it to be and more this sounds like an amazing opportunity.  What do you guys think of this fight getting cut?

Sam Raimi shares his thoughts on the return of his characters and says:

“I was honoured,” he says. “It’s like someone said, ‘You know your old friends that have passed away? We’ve found a way to bring them back for a brief time.’” Almost as good as having the power of the sun in the palm of your hand, eh?

I love this movie and I really love to hear the filmmakers share their thoughts on it.