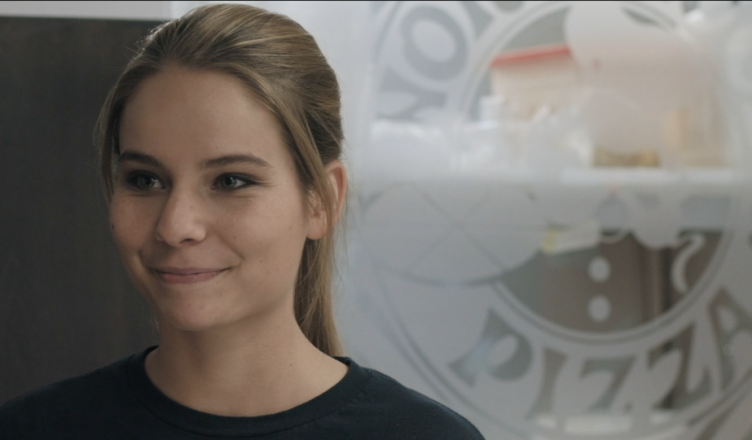 Earlier this month I reviewed the ultra low budget (in the 10,000 bucks ballpark), yet highly entertaining, “Northwood Pie” for The Movie Blog at this link:

“Northwood Pie” (2020): A Honkin’ Slice of The Slacker Sensibility | The Movie Blog

I recently got in touch with first-time filmmaker Jay Salahi. We visited about his rookie cinematic effort along with his plans for the future.

Many would call “Northwood Pie” a stoner comedy.  Hell, I called it that.  However, at it’s heart, this is a coming-of-age tale.  Still, pot is prominent and puffed throughout.  In my assessment, marijuana use is nether glamorized nor condemned here.  It’s just what most of these people do.  Thoughts?

Yeah, I think a stoner comedy just because the main character Crispin himself is kinda a stoner. They hang out and smoke weed however the film is never about smoking weed in anyway nor does anyone really point it out other than the one joke at the very end.

Being a 19-year-old stoner attending junior college living in Orange County, when you met up with friends and go to a park, lookout spot or lake, in my experiences you don’t just go there to sit and talk. You go to smoke and talk. So in that sense, yes, it is a stoner film, but I did not like pointing it out or making reference to it because ultimately it has no bearing on the plot or the characters, really.  It’s just something that they do.

But in reality it also, in simplest terms, is just giving the actor something to do every scene. The movie just requires them to sit and talk to each other constantly in a classic three shot setup and no one in the film was a professional actor really at the time, most were just high school friends, so anything to make the actors feel more relaxed or give the shot any added detail or natural energy helped. And I had never directed anything so it really helped make the film more naturalistic, which was the term I used the most.

Is “Northwood Pie” autobiographical?  Are these characters people you know?  Personality composites perhaps?

Yes.  The film is very much autobiographical. It’s based off mainly mine and writer/lead actor Todd Knaak’s life with a little spice of our friends and people we’ve met or seen thrown in there.

I actually grew up across the street from this pizza place (Northwood Pizza) as a kid and Todd worked there throughout high school.  And funny enough my little sister, who is 18, actually works there now.  It’s been a part of the Irvine community for 40 years!

On top of that every single place in the film where the characters hang out or smoke or vice versa are all locations that I went to and frequented multiple times growing up in that area myself.

Todd and I also both grew up with a single mother and a sister, and while I didn’t work at Northwood Pizza, I did work at a Juice it Up from 17-20yrs old and had similar experiences.  The film definitely represents more of my viewpoints at 21/22 when we started writing the movie. I mean there’s multiple lines or conversations in the movie that are nearly verbatim conversations I had in real life at the time. Also in October, 2013 I kinda pulled a Crispin myself. I dropped out of junior college, quit my job at Juice it Up and moved to L.A. all in the same week.

Do you think young people today are any more lost than they have always been as they try to figure out where in the hell their lives are going?

I’m not so sure that people are more lost today rather than it being easier to get stuck or complacent in life? Which is kinda a major theme of “Northwood Pie”. There’s just so many more options and choices then there were before, and I think it might be easier to procrastinate or push things off to the future or wait for a life to come to you.

What kinds of stories interest you, Jay, in terms of what you want to bring to us moving forward as a filmmaker?

I’m most interested in stories that transport you to another place or time.  I’m really into period pieces. My favorite genre is adventure and I got into movies as a little kid because the movies are the only place where you can fight an ancient mummy with a sword, or go to another place in space and time and fight space wizards, or visit a theme park on a secret island with dinosaurs.

I told my mom I wanted to become a filmmaker at 8-years-old when I saw the making of “Jurassic Park”.  I realized that the only way to experience actually going to “Jurassic Park” or to be Indiana Jones on the far side of the world finding a lost relic is to make the movie! It’s about going on that 2-3 year journey of creating that world and story. That experience, the ups and downs, turmoil and troubles, the stress and all the enjoyment, that’s the best way to live the adventure that the characters are actually going on and feeling in that story.

So like most people in a fantasy dream world I’d love to direct or work on a movie in that vein, but I’m also equally interested in the exact opposite. I love very low-scale mumblecore, simple movies about characters just talking. There’s something equally cinematic to a massive movie in these tiny films when you’re able to hit the right core of full circle storytelling. It’s the art form almost in its simplest form and it’s just as magical. The directors that inspire me most are, of course, “The Berg” (Steven Spielberg) and “Big” Jim Cameron, but also people like Mike Leigh, John Carpenter, Richard Linklater and Kevin Smith.

So for my next few projects we’re tying to blend the styles of filmmaking into one movie. The next feature is a horror film more in the vein of a studio James Wan/Blumhouse film, but still trying to keep the mumblecore character and conversationally-based honest moments as the main driver of the story, with a splash of that 80s Amblin heart and tone.

Yes.  The film is very much autobiographical.