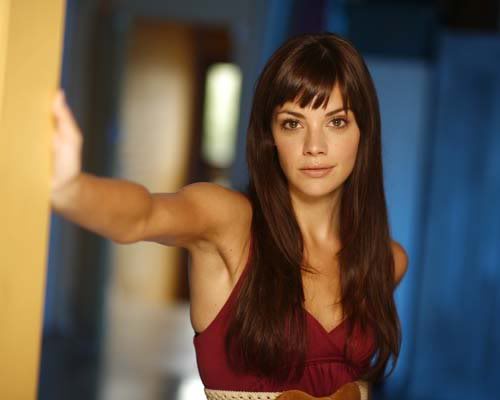 The Sci-Fi film Atomica (out now on VOD and Digital HD) recently released and I got to speak to the stunning and talented leading actor in the film, Sarah Habel. Sarah talked to me about the challenges of the role and what it was like working with Dominic Monaghan and trying to keep a straight face during their scenes. Check out excerpts of the interview below and the entire audio:

Jim: What attracted you to the role in this film:

Sarah: Yeah, it was a complete challenge. I loved that I was intimidated by the role. Her intelligence and how she has it all together, it was a huge challenge, and also her character temperature, it was cooler. I was just kinda honored that they considered me to do this, so yeah, I couldn’t turn it down. It was just such a huge challenge. I was looking for ways to push myself and this was one of the more difficult roles that I ever played.

Jim: When you’re mostly on the set by yourself, is there a specific mindset you need to get into to make it work and come alive:

Sarah: The set itself was so overly crazy, amazing and creepy that it was really that the audience is experiencing it through Abby’s eyes, so the set did a lot of the work for me. I had to be there to take it in and let it affect me, which was very easy to do. I found that to be a huge help because it was creepy down there underground and it was 40 degrees, old, bats flying around, it was a force to be reckoned with.

Jim: The film has this intimate theatrical feel to it. Did you feel the intimacy of it with so few actors to work with:

Sarah: I found the simplicity of the set-up of the story to be really helpful and engaging. I do come from theater, I studied theater, a first love kinda thing, so it definitely had that feel for us. Since you get so much time, especially for Abby and Robinson, the way their relationship evolves from contentious to a kinda brother and sister warm, then it completely flips. It was a huge ride within a really contained set and time period.