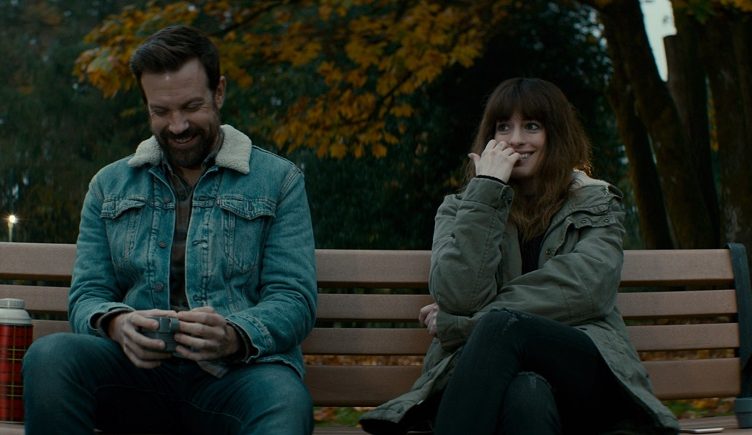 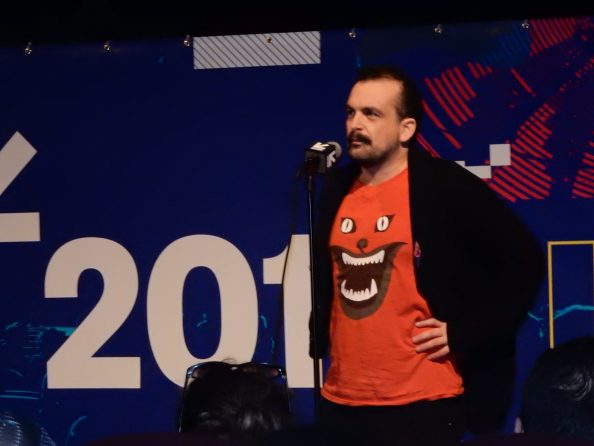 According to Spanish Director Nacho Vigalondo (“Timecrimes”), “Colossal” was greenlit by the studio because Anne Hathaway championed it. Hathaway saw a chance to play the avenging female who fights back against male physical abuse. The Oscar-winning actress (“Les Miserables”) jumped at the opportunity.

It’s too bad Hathaway and Vigalondo didn’t take this homage to Japanese kaiju movies and Godzilla one step further and have the two main characters (Anne Hathaway and Jason Sudeikis as Gloria and Oscar) represent the symbolic influence that the United States has in the world, for good or bad on a colossal scale. Now would have been a particularly good time in history for that approach.

But that didn’t happen in this improbable film about a young girl who drinks and parties too much and, as a result, is kicked out of cozy Manhattan digs by her British boyfriend (Dan Stevens) and returns to her small-town America hometown roots  to lick her wounds and try to figure her life out. While there, she learns that she controls a Godzilla-like monster that mimics her while terrorizing South Korea.

Vigalondo, during the Q&A after the film, acknowledged that, to a certain extent, he identified with the character Hathaway portrays, who makes it out of the small town she grew up in and seems to be making it in the Big City.  She doesn’t want to go back home with her tail between her legs, a failure. He found himself in the same position after his birth in Cabezon de la Sal, Spain, a small town, in regards to  his move to the Big City of Madrid, Spain. He also cautioned against making Colossal into too much of an anti-alcohol polemic, laughing about his own fondness for hoisting a drink now and then.

Hathaway’s Gloria has seemingly made it in the Big Apple as far as most of her classmates back home know. Until she hasn’t. Her drinking is out of control and her boyfriend (Dan Stevens as Tim) wants her to rein it in. He packs her stuff  and tells her to clear out.

Gloria goes back to a conveniently empty house—presumably her old home— in her small hometown, where old classmate Oscar (Jason Sudeikis) owns a bar and offers her employment. The signs all point to Sudeikis’ character Oscar having carried the torch for Hathaway’s character of Gloria, keeping tabs on her and following her progress for 25 years.

One cool thing that the filmmakers did to promote Colossal at SXSW was to have Sudeikis fly in and bartend one weekend night at the Highball Lounge, connected to the Alamo Drafthouse on Lamar Boulevard. Sudeikis makes a very good “boy-who-still-has-a-crush-on-girl”  in this film, although the character arc written for him is not completely logical. (One minute Sudeikis is the good guy helping out his girlfriend. The next, he is her worst nightmare.)

When Gloria (Hathaway) accidentally discovers that her presence in a certain park at an early hour of the morning causes a huge Godzilla-like monster to go on a rampage in Seoul, South Korea, Colossal veers from reality to sci fi fantasy. The premise (I’d like to have heard THIS pitch) is that anything Hathaway does remotely controls the monster, as long as she is in her local park at the bewitching hour. The monster mimics her actions, whether it is dancing, holding its arms up in the air, or killing hundreds of innocent locals under its giant feet.

Later, Sudeikis learns from Gloria that he, too, can wield super power as a robot, if he shows up at the same exact moment in the small local park, so we are treated to many scenes of the robot and the Godzilla-like creature squaring off while the hapless residents of Seoul scream and run for their lives. Funny or terrifying?

Colossal has been dubbed a “fascinating misfire” and “idiosyncratic and eccentric,  with reviews that cite ““diminishing humor from an inherently absurd conceit” (Dennis Harvey in “Variety” @ http://variety.com/2016/film/reviews/colossal-review-1201861918/) Colossal has been compared to Hathaway’s previous role as “Rachel Getting Married” meets “Godzilla.”

The cast does a good job with this implausible premise. Sudeikis, in particular, is asked to suddenly morph from hero to villain with very little rational motivation for changing so completely. He pulls it off, but is much more convincing in the likable first half of Colossal.

The feeling I got while I tried to decide whether I liked this film or not was that Hathaway was desperate to have a film portraying a female heroine who displays empowerment, one who triumphs over the bad guy(s) and would sacrifice a plausible plot to secure that opportunity.  Hathaway’s actions resonated with one abused woman in the theater, who spoke to the issue and described herself as being “moved to tears.” That seemed a bit much, since Colossal is predominantly comic, with serious underlying issues that are never fully addressed. But, giving credit where credit is due, it was a bold choice to make this film, if not a totally successful one.

There is little focus on what steps Gloria is going to take to overcome her apparent addiction to drinking and the party life. The supporting performers, (Tim Blake Nelson and Austin Stowell as Garth and Joel) playing cronies of Oscar (Sudeikis) are also good, although underutilized. There is a puzzling romantic encounter between Joel and Gloria that seems superfluous and unnecessary—almost as though it were an after-thought or a plot line that the director introduced and then dropped.

On the bright side, Jason Sudeikis comes to the fore as a player who can be convincing as the leading man/love interest in future films.

The plot is a flimsy premise for a movie under the best of circumstances, whether borrowing from Japenese takusatsu cinema, or an homage to films like “Godzilla.” It could have been a comic drama  about people coping with normal problems— alcohol addiction, drug addiction, or domestic abuse— but it does little but scratch the surface of those weighty issues. Cast members are either not used to shed any light on same or are barely used at all.  Sudeikis’ character arc was particularly troublesome, (although it apparently rang true for at least one member of the audience).

I’m wondering whether people who shelled out up $40 minimum for a night out on the town (dinner, parking fees, movie ticket) are going to feel this slight film was worth the price of admission? During the post-film Q&A, the Director urged all of us to post a 3-word Twitter review with the hashtag #Colossal. This would enter all of us into a contest.

The man behind me wrote: “Colossal: Colossal fail.”