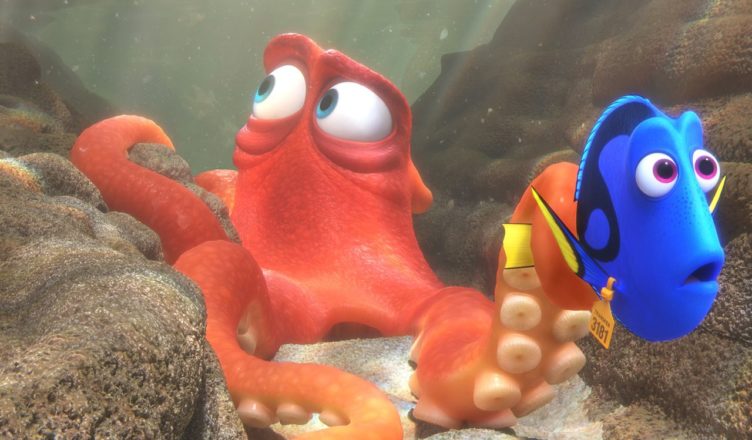 Synopsis: The friendly-but-forgetful blue tang fish reunites with her loved ones, and everyone learns a few things about the real meaning of family along the way. (IMDB)

“Finding Nemo” was a huge triumph for Pixar, so naturally we would be finding another fish to duplicate on the success. Which brings us to “Finding Dory”, the sequel that delivers less Nemo, but a lot more of his friend Dory. The premise of the movie is similar to the first one, just with a different character. Don’t mess with the formula that works. Dory is longing to see her parents that she hasn’t seen since she was a baby and got lost. She decides she’s ready to travel the mysterious waters in hopes of reuniting with her mom and dad. Nemo and Marlin join Dory in her sea adventure that has many ups and downs along the way.

The best thing the film does it stick with the formula and concept of the first film. It’s not broke, don’t fix it. The colorful seas creatures are back and they are the central appeal of the film. Cute, colorful fish that talk. I mean how can you not like that? There are a slew of fun characters that appear along Dory’s journey, most notably septopuss Hank. Those two are sort of a yin and yang, but bond together nicely.

The storyline is fairly deep (no pun intended) in context. It deals about loss, friendships, and what it seems like a hint to a kid (Dory) having a brain disability that makes her struggle with short term memory loss. There are some heavy subjects that are touched upon, most kids won’t understand it, but parents will. The presentation of the film is appealing to every age group, even if they each get something different out of the movie. This is what Pixar has done over the years. Feature emotional stories (“Up”) that are both sweet and heartbreaking, yet also a lot of fun and infused with humor.

Visually, Pixar gets it done again. The film looks fantastic in 3D. It must be a much better experience seeing it in 3D than in standard definition. The fish and the water world pop out of the screen. The look is the least of the film’s problems.

The main issue I had with Dory is Dory herself. I get the subliminal context, they are trying to portray Dory as disabled, but the character is really annoying and frustrating to watch. It’s like she’s has ADD times ten. The CONSTANT back and forth, the spewing of her thoughts, the memory loss rehashing nearly every thought or action is mind numbing. I get it, the character can’t remember what she says, but do you have to constantly project that throughout the film? It’s tough to focus on the journey, when Dory keeps distracting and confusing.

Nemo is a far more appealing and distracting character, yet it is pushed to the background in this film. Granted, Nemo got his own movie, but Nemo is in a reserved role, and there is a little too much focus on only Dory. Why not at least had Nemo get screen time apart from Marlin? Instead, they must be so afraid for Nemo getting lost that they have him pretty much attached to Marlin at all times.

If you attempt to distract yourself from Dory (it’s hard to do) then the film would be enjoyed by most. Fans of the original will like it, parents and kids will like it, teens who were kids when Nemo came out will like it also. The tougher part might be selling new or casual fans on Dory. A side character that gets too much attention, and in the process distracts from the fun adventurous story with her annoying persona. If Dory was muted, it would make this movie far better. You should find time to see “Finding Dory” as it’s sweet, entertaining, fun for the entire family. As for Dory, I kinda wish she got lost for most of the movie.

One thought on “Review: “Finding Dory” Is Fun And Engaging If You Can Put Up With Dory”