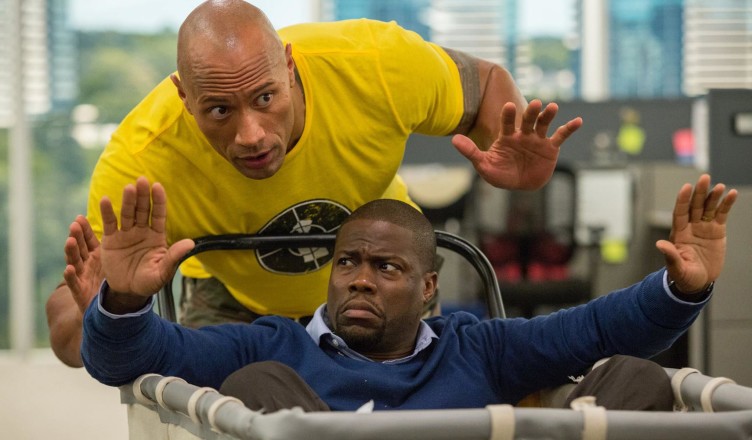 Synopsis: Two high school acquaintances meet again after 20 years apart, this time the former jock turned accountant is needed to help out his friend and the government on a spy mission.

What happens when you bring together Dwayne “The Rock” Johnson and Kevin Hart? You get a kick-ass, fun, action comedy. If you need a film comparison, then “Central Intelligence” is in the same genre and mold of last year’s surprise comedy hit “Spy”. But it’s actually better than “Spy”.

Calvin Joyner (Kevin Hart) was a star athlete and beloved figure during high school. Fast forward to now, Joyner is married to his high school sweetheart and working as an accountant. His glory days long behind him until a familiar face reappears in his life. Bob Stone (Dwayne Johnson) is a former fat kit, bullied during high school, his only ally being Joyner. Stone appears in Joyner’s life after 20 years with one thing in mind. Get Joyner to join him on a secret government operation. When this unlikely duo gets going, things go completely out of control. Lives will be on-the-line.

I had a blast watching this movie. The outrageously ridiculous situations these two get wrapped up in are really entertaining to watch. I thought the trailers might have given away all the best lines and scenes–they didn’t. Kevin Hart is constantly screaming and complaining, while Johnson is just relaxed and “cool”. The contrast between the two is exactly what this movie needed. Not only is Johnson the “The Rock”, an intimidating giant man with muscles popping out of everywhere, but height he’s as tall and big as two Kevin Hart’s on top of another. Kevin Hart plays Kevin Hart, it works this time.

Both actors are the linchpin of the film. Their chemistry is great. Their back and forth is well executed. Remembering that he was overweight geek and Joyner was the superstar jock is still the most important ideal that resonates with Stone that grounds him around Joyner. The little guy has a lot of power, even though he doesn’t have the muscles.

The surprise cameos and supporting characters that pop-up throughout the movie were great. Not to spoil the surprises, but a cameo does link up “Spy” in a central way. The gags were well executed and worked with the characters actions and motivations. I enjoyed the scene where Calvin and his wife are seeing a therapist, but to Calvin’s surprise it’s Stone that’s conducting the session. A funny back and forth takes place. There are so many “wink, wink” moments to fans of Johnson and Hart. Just like when Joyner describes Stone’s new look resembling “Hercules”. A nod to Johnson’s previous film role.

The action is balanced out by fun slapstick interactions and moments between Johnson and Hart. It keeps it upbeat and action packed. Not to get lost in all the action and jokes is that the film has some nice heartfelt moments. You kinda feel bad for Bob and the way he was bullied. Wrapped up in all the fun is some commentary on bullying. So there is a message being sent, believe it or not.

About midway through the movie the plot gets overly convoluted, to the point where I wasn’t sure what was happening, or what the mission was actually about. It gets even more confusing when the film purposely teases the identity of Stone. Is a bad guy using Joyner, or a good guy in need of his help. It goes back and forth so many times that by the time it’s revealed what side he’s on, I still felt lost and exhausted.

“Central Intelligence” is exactly would you could ask for a buddy comedy to be. Lots of quick striking gags. Ridiculous action sequences. Two compatible, yet distinctive leads. I had a lot more fun than I expected. This is the sort of movie you go to get some laughs without focusing on the storyline, although the filmmakers attempt to make the plot semi suspenseful. A big Johnson and a little Hart will get you a whole lot of laughs.