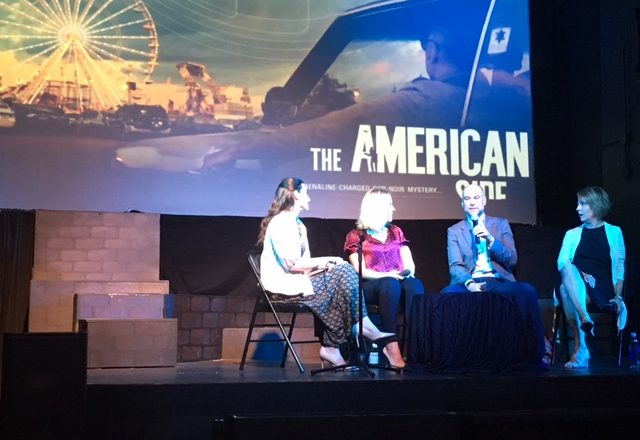 I had the great opportunity to attend the Chicago premiere of “The American Side” at the Wilmette Theater with my fellow Chicago Independent Film Critics Circle (CIFCC) member Don Shanahan. Writer/director Jenna Ricker and the co-writer/lead of the film Greg Stuhr were in attendance for a Q&A following the screening.

It was a few event. A group of Buffalo natives (film’s set in Buffalo) came out to celebrate their local film. The Q&A lasted for over an hour. On the panel joining Greg and Jenna was executive producer of the film Mary Henry. The panel was conducted by local Chicago director and producer Oriana Oppice. Greg, Jenna and Mary shared a lot of stories from the set. Revealed some cool secrets of the film. One of the secrets revealed was that Alicja Bachleda’s character Nikki Meeker’s name was inspired and a nod to Nikola Tesla and Meeker was a nod to Ralph Meeker who played Mike Hammer, also referenced in the movie.

This was a great event to attend. I highly encourage everyone in the Chicago area to come out to see the movie at the Wilmette Theater. The film will be running through June 23. There will be another Q&A on the June 19. The film will be screened at the Capitol Theater in Olympia, Washington on June 30, with Jenna and Greg in attendance. You can also catch the movie on iTunes  and On Demand.