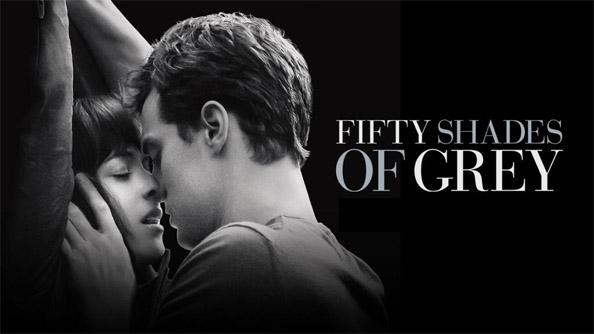 Everyone has been anticipating Fifty Shades of Grey due to the popularity of the book series and their risque subject matter. The film is very much adapted from the books from the character development to the spoken dialogue but even fans of the series may see this word for word adaptation as one of the film’s strongest faults.

“Fifty Shades of Grey” tells the tale of Anastasia Steele, a simply plain girl who is noticed for her unapparent beauty by billionaire playboy Christian Grey. Like many romance films, the character of Anastasia is a shell that many women can fit themselves into. Her clumsy shyness coupled with a lack of confidence is relatable to most any woman at some point in their lives. The fantasy begins when this “prince” of a man, Christian Grey, notices her among a sea of model-type women and becomes infatuated with her.

Christian is a more than idealistic man. He has contradicting character traits (that a normal human would not possess) that make him a perfectly balanced object of desire for women. He is both obsessively infatuated with Anastasia yet also distant. He is dominating and assertive yet also sensitive and generous. He is a success-driven workaholic but has devoted time to both hobbies and Anastasia. Each one of these qualities create a person that cannot exist because they are too conflicting. This makes this an interesting fantasy for those that can be engaged in the film but may lose many that have a stronger grip on reality.

When it comes to the portrayal of these characters I will say that Dakota Johnson and Jamie Dornan give more than adequate performances. Unfortunately you have to sift through the poorly scripted dialogue to notice their talents. The dialogue seems to come straight from the “Fifty Shades of Grey” novel which may be engaging when read but is awkward when spoken out loud. Throughout the film out of place dialogue takes away from what could have been some genuine chemistry. Every time I was starting to see the romance flourish between the two characters, a misplaced line would set the romance off course. If placed in a true romance film with more genuine dialogue, I could see Jamie Dornan and Dakota Johnson working very well together when it came to their acting and chemistry.

The romance is one aspect of this film and of course there is the taboo subject of sadomasochistic, sexual exploration. I see how this fits into the story of balancing the two characters. The emotionally distant playboy (Christian) coupled with the virgin girl next door (Anastasia) feeds to the notion of “when opposites attract.” In theory, it’s a great way to create a well rounded romance by addressing the emotional needs of a woman while also taking sexual exploration to a new level. On paper, readers’ imaginations can take these sexual desires wherever they want, but when presented on screen these moments become a bit redundant. When first introduced to Christian’s “playroom” there’s an initial moment of intrigue and anticipation that builds throughout the film. After we’re introduced to the playroom the film is filled with taboo but playful discussions between Christian and Ana which can be humorous at times but leave us anticipating the moment when they both engage in the activities.

When we first see Anastasia and Christian enter the playroom to “explore” his desires, things are intense but no more intense than any other obscure love scene we’ve seen throughout cinema history. While the first encounter was intense, I found the following to be very repetitive like seeing the first scene over and over again. The expectation of progressing to the next level of exploration was never met, even in the climactic breaking point. This may be due to the restrictions of the “R” rating rather than something like “NC-17” but I was more curious about the development of the two characters than the repetitive sex scenes.

Overall I would say that “Fifty Shades of Grey” is engaging for a fantasy driven audience. I found many moments to be reminiscent of “Twilight” with some cheesy dialogue but replacing the intrigue of exploring the mysteries of the characters with exploring sexual desires. I wanted to enjoy this film hoping that they would provide deeper character development to explain Christian’s sexual desires and push against monogamy while also exploring Anastasia’s reactionary emotions to Christian’s behavior. Unfortunately they focused too much on the repetitive sexual exploration rather than story which I found to be disappointing. And this is coming from a hormone-driven, sex craved man…haha.