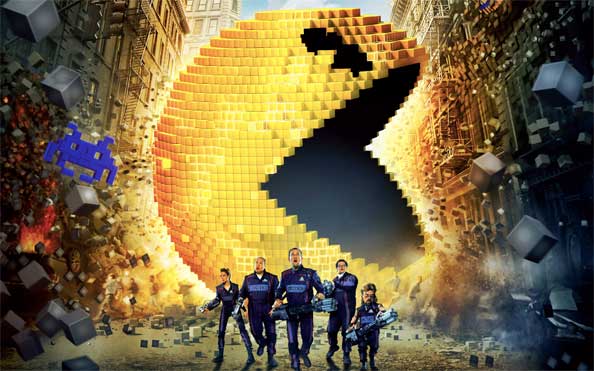 Synopsis: When aliens misinterpret video feeds of classic arcade games as a declaration of war, they attack the Earth in the form of the video games.

Adam Sandler has been on a downward spiral for quite some time. But when I saw the trailer for Pixels I was actually a bit excited. The idea of aliens as classic video games brought to life sounded at least entertaining from a visual standpoint. While “Pixels” did have its moments of fun, it still carried the weight of lackluster characters and story.

Adam Sandler teams up with his usual film buddies and then adds some newcomers. Kevin James awkwardly poses as the President of the United States but couldn’t make any less sense in the role. Josh Gad and Peter Dinklage both have their moments in the film as comic relief but are underutilized as actors. The ring leader Adam Sandler of course has to force himself on the audience as the top dog despite being outshined by the rest of the cast. His character Brenner has to be superior to everyone in every way and it’s apparent and perturbed me quite a bit throughout the film. Brenner (Sandler) made everyone seem inferior to him and the “Pixels” plot suffered due to this element.

The moments that shined were due to the nostalgia of an iconic decade, the 1980s. The video games that came to life in visually epic battles did hold my interest as I reveled in the eye candy. But when I said that Adam Sandler forced his character’s presence on the viewers, that statement definitely holds true. We’re given a bunch of the usual Sandler jokes which are immature and incredibly outdated. In addition to that, the lack of chemistry between he and Michelle Monaghan just added to the unnecessary moments. If “Pixels” could have balanced the weak character development with the visually appealing action we expected, it could have been at least an entertaining film. But unfortunately the visuals you see in the trailer are essentially the extent of what you see in the film.

Overall “Pixels” had the potential to allow us to reminisce and did at certain moments. The classic video games we all know terrorizing our world was visually pleasing and entertaining but they were too short-lived. The characters’ backstory should have been much shorter and the focus should have been on the action. There were a few laughs to be had but they weren’t from Adam Sandler. Unfortunately Adam Sandler seems to ruin most everything he’s attached to and “Pixels” doesn’t give me hope for his future.