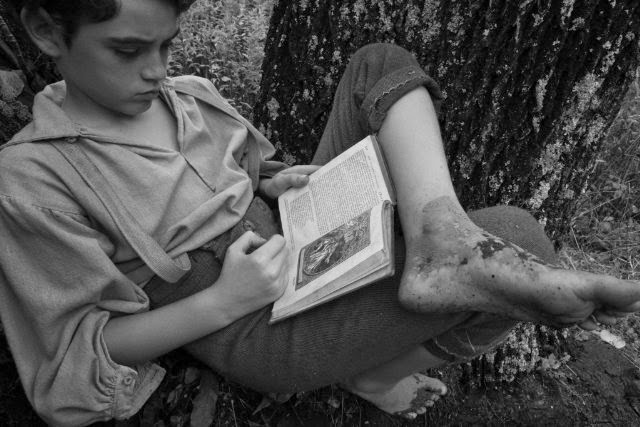 Synopsis: The story of Abraham Lincoln’s childhood in the harsh wilderness of Indiana and the hardships that shaped him, the tragedy that marked him for ever and the two women who guided him to immortality. (c) Imdb

Better Angels is the directorial debut for A.J. Edwards, and it’s a good a start as a filmmaker can have. Edwards is a longtime protégée of the famed director Terrence Malick who is also producer on this film. This film looks exactly what you would invasion a Terrence Malick film to look like. The focus on nature is undeniable. The tall trees, flowing creeks, corn fields, are just a few of the vast amount of nature that is portrayed as a character in a film.

Better Angles is a film about a three year span in the childhood of Abraham Lincoln. If you don’t read the description prior to seeing the film, it’s easy to be unaware about who these characters are, much less that it’s a story about Lincoln. From the start of the film the filmmaker zeroes in on the setting. The Lincoln’s live in an isolated forest, living in a little hut, with no sight of any other life. They live a very a very simple life, struggling to get by day-to-day. The family life is turned upside down with the death of Nancy Lincoln. The family is forced to move on quickly, as the film rapidly introduces Tom Lincoln’s (Jason Clarke) new wife Sarah (Diane Kruger). There isn’t much left to describe. The plot is overly simplistic, with seemingly no rising action. What it manages to achieve is to chronicle the daily life and routines of the family. Tom Lincoln is shown as a strict, unemotional, family patriarch. The Lincoln boys bond over self-imposed wrestling matches, these matches seem to draw the brothers together. There is one boy who stands out from the rest. He’s curious, rebellious, and brave. That boy is Abraham.

The film makes no mention of Abraham becoming the future leader of this nation. It purposely avoids and contrast. It’s a pure character piece. Edwards specifically aims to to showcase a portion of Abe’s life that hasn’t been documented in cinema, and gets little recognition in historical artifacts. It’s a bold attempt by Edwards to base the movie on that premise. It’s what ultimately makes the film unique.

There are some fabulous and talented actors in this biopic. The red-hot Jason Clarke plays the dull Tom Lincoln. Clarke’s take is spot on. He gives some life to a lifeless persona. There are nuances that Clarke exhibits that shows the less stoic side of Tom. Brit Marling is Nancy Lincoln. Her role is more of a cameo, we don’t see much of her, it’s a bit of a forgettable role for a rising talent like Marling. Diane Kruger is Sarah Lincoln. She does a fine job of making a character who by nature might be unlikable, likable. Braydon Denney who plays young Lincoln is fairly dull. He just isn’t very memorable.

Better Angles is a historical biopic that feels more like a documentary than a film. It’s quite boring, but it’s not a knock on the film. It’s very skillfully made. Terrence Malick has made quite the impression on Edwards. It looks, feels, and comes through like a typical Malick film. Visually detailed, character driven, and lacking standard narrative continuity. It definitely won’t be appealing to everyone. It simply has a boring and slow feel to it. There isn’t much going on, at all. The black and white theme adds a nice touch. It makes it feel more authentic. Better Angles is a period piece film. The sculpting of the characters and surrounding elements is what carries the film. The portrayal of nature as a character adds life to a film that lacks emotion. The changing of the seasons, gives the movie some needed freshness, and gives the characters a new purpose while rejuvenating them on-screen. It’s a fine piece of unseen history on film. It’s a unique  take on a historical figure who has had a lot of different incarnations in film. Malick fans will find appreciation in the film. A.J. Edwards is a rising filmmaker with a detailed eye for filmmaking. The film is good for the purpose it has, which is to educate on the phase of Abraham Lincoln’s life that most area unaware of. In that aspect it succeeded. From a entertainment standpoint, it’s too uneventful to keep the viewer intrigued.

The Abe Lincoln you never knew about

One thought on “Review: Better Angels”