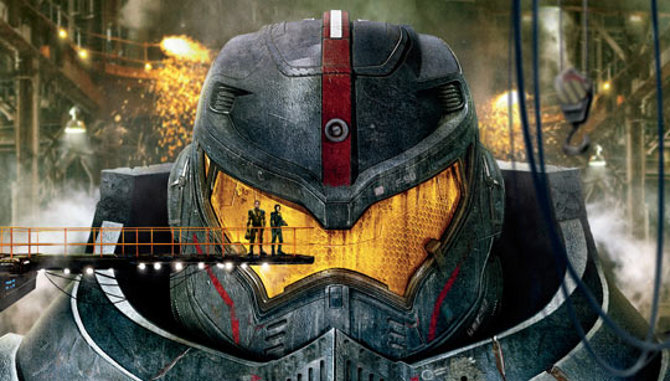 Guillermo Del Toro’s epic looking Pacific Rim finally has a trailer online.  We’ve had glimpses at the film in the past with a few scant images and a poster but now we get a very good and detailed look at the movie, its creatures, story, and more. Behold, The Pacific Rim trailer is here!

That’s not what I expected at all. I’m not sure what I expected, but I certainly didn’t expect “Reel Steel” vs. “Godzilla”. For some reason I presumed the film would have a much more Japanese art style to the creature design,and mech designs, similar to Michael Bay with the Transformers. I liked a lot of what I see here and hope that the two leads of ‘Sons of Anarchy’ can keep me entertained in the film, but Charlie Hunnam’s monologue at the beginning will be jarring for fans of his show as it’s improbable for me to dismiss his role as Jackson Teller when speaking in that trademark soft voice of his. It may not be a detriment to the film, but it could be distracting as hell for those of us hooked on the show.

The size of the creatures, and the robots, are great and they seem gigantic in scale. The trailer is a little dark and focuses on scenes that either take place indoors or at night, but they set the tone of dread that I think Del Toro was going for with this. So far it looks interesting but also reminiscent of recent films that involved giant robots taking on aliens like Transformers and Battleship which may turn off a few people who submitted themselves to seeing Rihanna and Taylor Kitsch save the world. I like the trailer and can’t wait to see more. I don’t even need another trailer, just tickets.