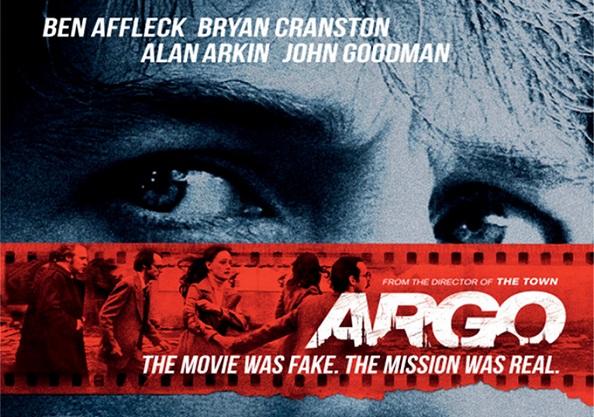 Synopsis: As the Iranian revolution reaches a boiling point, a CIA ‘exfiltration’ specialist concocts a risky plan to free six Americans who have found shelter at the home of the Canadian ambassador.

Ben Affleck hits the big screen once again as the star and director of the film “Argo.” Affleck excels in the role of director by keeping the suspense running from beginning to end, while providing accurate historical facts and value. By starting the film with a factual backstory, there is more focus on the characters of the film, establishing a stronger relationship with the audience through each character’s personal struggle. Having the facts disclosed up front also keeps a consistent flow of character development and suspense running simultaneously which makes “Argo” a film that you become easily lost in and forget that it’s just a movie.

“Argo” takes place in the United States and Iran, constantly switching between the two as the CIA works on solutions to rescue the Americans. While the Iran scenes were actually filmed in Istanbul, the look and feel of Iran is established through effective recreation of areas like the Bazaar and historic scenes based on the true events. The U.S. scenes mostly take place in an office setting except for the few scenes in California when creating the fake film. Despite the fact that the setting is mostly indoors, the characters themselves are the focus and their interaction with their surroundings establish the setting as effectively as the cinematography.

The characters’ struggle is the focus of this film and their emotional reactions to that struggle are what strengthen and develop the ongoing suspense in the film. There is a long list of well known actors and actresses and overall there are no bad performances, no matter how large or small the role. Ben Affleck gives a good performance but the director’s chair is where he shines. Affleck’s role is similar to many of his other recent roles, which is a character of few words and little emotion. While his performance is actually good, there is not much of a dynamic to the character, which shows little range in Affleck’s abilities as an actor. Bryan Cranston seems to be appearing everywhere lately and it is obvious when you see any of his roles. In “Argo” he manages to add to the suspense of the film by his amazing performance that showcases the panicked state of the CIA when putting together the mission. His role is a minor one but it is very much needed because he is Affleck’s support throughout the mission. John Goodman and Alan Arkin provide small bits of humor and pleasantries to the film. I always enjoy Arkin’s brash and subtle humor and it meshes well with Goodman’s character in the film. Their roles are the basis for the proper execution of the mission and they both provide the moments that allow you to catch a breather in between the heart pounding suspense. Although their characters are pleasant, it is the suspense that drives this film and the characters that stir up that suspense are the highlight of this film. My two favorite roles in the film were the ones played by Kerry Bishe and Tate Donovan. While the roles of many of the Americans in Iran are executed well, it is Bishe and Donovan that shine. Their performances are the best of the film in my opinion. I had no trouble seeing Bishe as a worried wife and Donovan as the elder and leader of the group of six. Their ability to play their characters’ roles so well while also posing as a film crew within those roles showcases the most dynamic roles in the movie. They are able to play two roles at once as they play the victims in Iran and then move to playing a role of a film crew which is meant to be played not so well. I could look at both of these actors throughout the film and could not even notice a minor facial expression that was out of character.

Overall I would say that “Argo” is a must see. It is one of the most suspenseful films that I have seen in awhile which can be proven by my lack of fingernails after the film ended. There are a variety of great actors and actresses in the film, as well as some notable performances, and an attention grabbing plot that is for the most part historically accurate. I believe that Ben Affleck has found his calling as director and “Argo” may be his best directed film yet. “Argo” is put together extremely well and I find it difficult to find one element of the film I did not like.

Heart pounding suspense that engages you from start to finish…