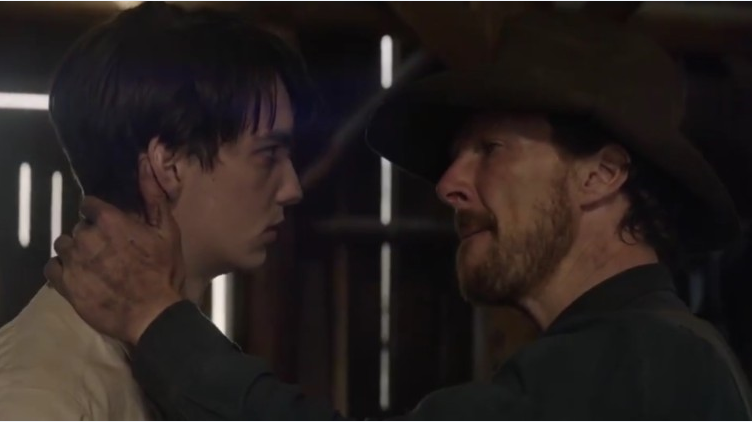 Every dog must have his day and that’s how we can feel “The Power of the Dog”! Writer, producer and director Jane Campion brings a thrilling psychological Western drama titled “The Power of the Dog” to the big screens. Based on the novel of author Thomas Savage by the same name, the film features Benedict Cumberbatch, Jesse Plemons, Kirsten Dunst and Kodi Smit-McPhee in the lead roles.

The story opens in the 1925 Montana. Two wealthy rancher brothers Phil (Benedict Cumberbatch) and George Burbank (Jesse Plemons) take part in a cattle drive. The two brothers were of opposite nature. George had a soft personality while Phil was raw. Phil was very much inspired by the late “Bronco Henry” whom he idolized as his mentor.

During the cattle drive, they met an inn owner widow named Rose Gordon (Kirsten Dunst). George fell for her and eventually they got married. After marriage, Rose moved to George and Phil’s ranch house. Rose had a son named Peter (Kodi Smit-McPhee). She used George’s money and got Peter admitted in a medical college for studying medicine and surgery.

Now things started getting tensed as Phil had a disliking for Rose as well as for Peter. He thought Rose to have married George only for his money and started humiliating and taunting her in his own harsh ways. Things took a turn for the worse when Phil openly humiliated Rose in front of his parents (Peter Carroll and Frances Conroy) and Governor Edward (Keith Carradine) at a party organized by George. Rose couldn’t take it anymore and resorted to alcohol consumption. Rose never used to be an alcoholic. However, the frequent humiliation that she faced from Phil coupled with her recent alcoholism started worsening her condition.

When Peter came home for the college summer break, he was shocked at his mother’s condition. Phil along with his ranch men took Peter as an easy target and started bullying and taunting him every now and then. Peter secluded himself in a room where he studied diseases and dissected animals.

Now Phil had an even more sinister plan in mind. He planned to mentally torment Rose by patching up with Peter. Seeing Phil and Peter’s good relationship, Rose’s alcoholism worsened. Now that Phil was friends with Peter, he promised Peter to make him a lasso rope from raw hide and teach him horse riding as well.

As days passed, a series of events started to unfold. One day, Peter headed out alone and found a dead cow which had possibly died of anthrax infection. He remembered that Phil had planned to make a lasso for him out of raw hide. Something evil occurred in his mind and he put on his gloves and cut off some pieces of hide from the cow’s carcass. No doubt, Peter was a medical student and was good at dissecting animals!

On another occasion, during a fencing job when Phil and Peter had killed a rabbit, Phil received an open wound on his hand. Phil was so much obsessed with making the lasso for Peter that he lashed out at Rose when no hide was left for him to finish the lasso. He was stopped by George on time and Peter calmed him down by offering him that hide which he had cut from the anthrax-infected cow’s carcass. He did not tell Phil that the cow was diseased.

Phil was touched by Peter’s thoughtfulness and promised him that they will have a much better relationship moving forward. Together Phil and Peter spent the night at the barn finishing up the lasso rope. In order to soften the hide for making the lasso, Phil had to submerge it with his wounded hand in water. 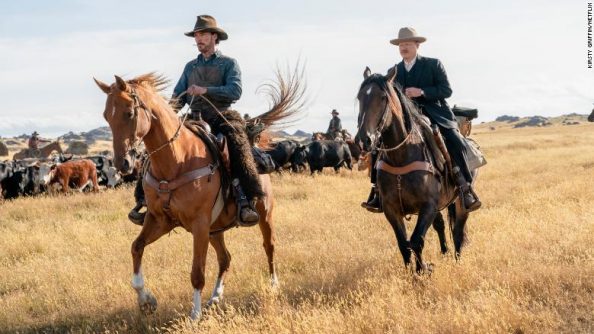 The following day, Phil did not show up for breakfast. George went to Phil’s bedroom and found him sickened in bed with his wound heavily infected. George decided to take him to the doctor but before he could do that, Phil was deliriously searching for Peter to hand him over the finished lasso.

Phil eventually died and the doctor told George that he died due to anthrax. George was puzzled at this because Phil was very much particular about his well-being and used to avoid diseased animals. Finally, Phil’s body was prepared for burial.

Peter hadn’t gone to the funeral. He opened a Book of Common Prayer and read the Psalm 22:20: “Deliver my soul from the sword; my darling from the power of the dog.” The ending scene shows him putting the finished lasso under his bed with gloved hands. He is shown walking down the hall and watching his stepfather George and his mother Rose embracing and returning home. Seeing this, he turns away and smiles.

I must say, the screenplay by Campion in The Power of the Dog was indeed a faithful adaptation of Savage’s novel. The plot truly intensifies into something sinister as it proceeds. What initially appeared as a budding friendship turned out to be a planned murder!

Smit-McPhee’s Peter character does have some complexity involved.  I find Peter in The Power of the Dog to be direly unpredictable with dark intentions in mind. Peter is shown as a reserved guy who keeps himself mostly secluded in a room dissecting animals. In a scene, Peter describes Phil how he found the dead body of his alcoholic father hanging and had to cut it down himself.  Or are these scenes actually the portrayal of Peter’s hidden killer instinct? Who knows?!

Nobody could ever imagine that his friendship with Phil was only to seek revenge upon him for the woes that he had brought upon his mother. Peter was cunning enough, which can be seen by the way he carried out his plan. He infected Phil with anthrax without letting anyone have even the slightest hint about what actually happened. This really puts me in a dilemma to decide whether Peter was a caring son or a cold-blooded murderer? 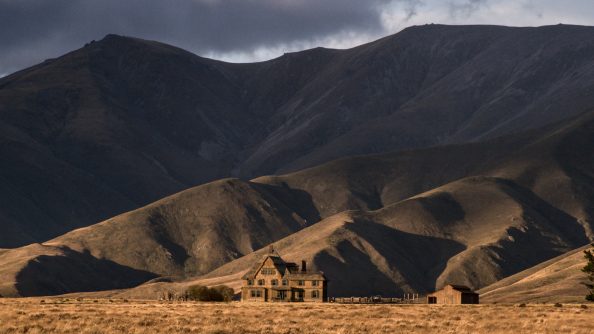 Cinematographer Ari Wegner has done a marvelous work indeed by capturing the essence of the country life in The Power of the Dog. I must tell you that I really enjoy movies which are shot in the countryside or in forests. The beautiful countryside, ranches and village life portrayed throughout the movie made it a visual treat, at least for me!

The most amazing fact is that The Power of the Dog was actually shot in New Zealand! I believe that a great effort was shown by the crew along with an immaculate camerawork to turn the landscapes of New Zealand into that of 1920s Montana.

Veteran actor Benedict Cumberbatch particularly known for his upper-crust character roles in movies and deep resonant voice seemed a great fit for the character of Phil. Cumberbatch with his tyrannous and villainous presence spiced up the movie till its end. Phil is a complete bully and I must say that after a long time I have come across such a nerve-racking antagonist.

Not A Movie For Everyone

If you ask me, I would say that The Power of the Dog did appear to have lost pace at certain points of its two-hour runtime. If you are an action or adventure lover, this movie is not for you! Psychological twists and turns take the better of the plot and if you happen to be a thriller or drama lover instead, you are sure to enjoy an atmosphere filled with distress.

The Portrayal Of Homosexuality At Certain Points

At certain points, the plot gets awkward with Phil’s homosexual flings. Phil used to idolize “Bronco Henry” who is supposed to be a fictionalized rancher. The most surprising fact is that this Bronco Henry character never appeared anywhere in the film. He was all in Phil’s mind. In fact, this character was taken by Savage in his novel from a real life cowboy named Bronco Henry who used to work in a ranch owned by his maternal grandparents.

The Power of The Dog does take a steep dive into sheer awkwardness as Phil’s homosexual imaginations with Bronco Henry got wilder with time. In a ranch scene, where Phil is seen chatting with Peter, he described Bronco Henry to have saved his life during a freezing weather by lying body-to-body with him in a bedroll. Was Phil in love with Bronco Henry? Honestly, this Bronco Henry character looks to me as queer as Phil himself. 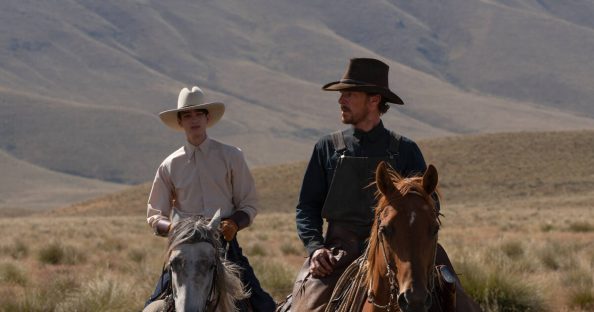 So, does the title justify the movie? As per my opinion, it does! The Bible passage which Peter read out on the occasion of Phil’s death too had the phrase “The Power of the Dog” in it.

When Jane Campion was asked in an interview what “The Power of the Dog” actually meant, her reply was befitting. She addressed The Power of the Dog to be those deep and uncontrollable inner urges that may erupt and destroy us!  So did Peter secretly destroy Phil and save his mother from his tyranny, didn’t he? As per me, he did show that every dog has his day!