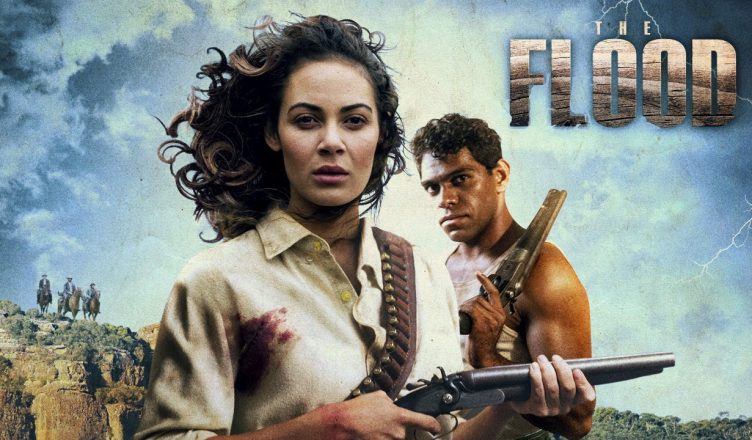 Set during World War II, this is the story of Jarah’s coming-of-age in a brutal and lawless land.  She grows from a sweet child to become a strong, independent and ferocious woman.  Pushed far beyond her limit, Jarah takes on Australia’s corrupt and bigoted system one bad guy at a time.  Armed to the teeth, she erupts in furious and bloody retribution.

Fighting like hell through a surprising series of twists and turns, will Jarah ultimately find the redemption and reconciliation she most desperately seeks?

If you’re a fan of badass babes bequeathing no mercy upon miserable, mangy men, then dive head first into “The Flood”.

For you, my friend, the water’s fine.

I confess that I don’t know how historically accurate the “The Flood” is or isn’t.  Could this land “Down Under” really have been this over the top evil?

Hey, I get dramatic license and all, but daaaaaamn…

One would assume that Victoria Wharfe McIntyre is hip to history, however

She wrote and directed the film.

McIntyre has chosen here to portray a horrific society in which white governmental and religious authorities treat native tribespeople with savage and subhuman disdain and hostility. These explicit scenes of brutal assault and torture are profoundly disturbing to witness. In fact, I often didn’t, turning away from the screen as the monstrous barbarity simply becomes too much to bear.

Homage to “The Vicar of Violence”

One thing is for certain. Victim turned heroine Jarah (Alexis Lane in a searing feature film debut) is not about to let any of this heartless atrocity go left unpunished. And, through the unblinking lens of McIntyre (a visceral vision related by splattering blood to that legend of stylized violence, Quentin Tarantino), Jarah celebrates her revenge with relish uninhibited. It is a joy that, while on face perverse, emanates from the unspeakable pain that drives from deep within.

What is it they say again about a woman scorned?

If you’re a fan of badass babes bequeathing no mercy upon miserable, mangy men, then dive head first into “The Flood”.