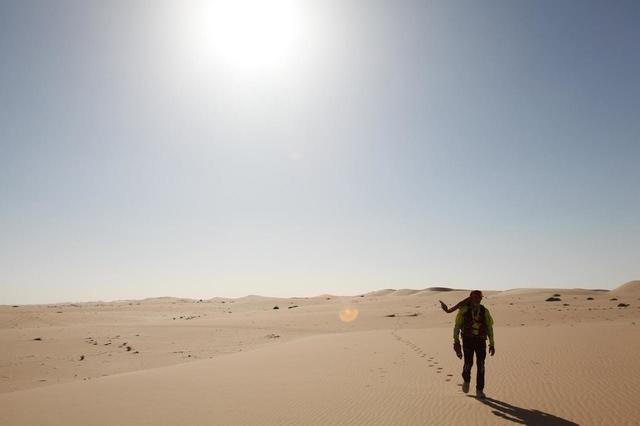 Deftly directed by Christopher Cassel, the new documentary “Into the Lost Desert” follows extreme desert explorer Max Calderan as he pursues his lifelong dream to cross the last uncharted desert on earth, the Rub’ al Khali.

In a lifetime spent crossing deserts on foot, Calderan has survived some of the most extreme and difficult terrain on earth, pushing his body to its limits to endure the most inhospitable environments anywhere. Until now, only one expedition has been beyond his grasp: the Rub’ al Khali, the massive desert in the Arabian peninsula; its 700-mile west-to-east span has never been crossed in recorded history. Now, at age 50, Calderan will make the attempt, braving the extreme heat (averaging 117 degrees Fahrenheit), shifting sand dunes towering up to 1000 feet, poisonous snakes, spiders, scorpions, and seemingly limitless life-threatening challenges.

From a strictly visual perspective, this is a production nothing less than spectacular.  And stunning perspectives proliferate the entirety of “Into the Lost Desert”, compliments of the keen eye of cinematographer Michael Haertlein.

Haertlein and his crew are inherently limited by the vast and predominantly unvarying and brutal landscape of the Rub’ al Khali.  Striking drone photography helps here to be sure.  Still, there is a sense that the available shots are short on variety.

Why in the hell do you DO this, Max?

There is never any real articulation in “Desert” regarding why Calderan willingly engages in the extreme desert exploration to which he has committed his life.  The fact that Calderan himself can’t explain to us the reasons he must do what does is at once intriguing and perplexing.

If Calderan succeeds in his quest to conquer the Rub’ al Khali, is that then the pinnacle of his curious career?  One would certainly think so.  But then again, we are not Max Calderan.  And of him, there is only one.

Drama.  Tension.  Beauty.  Harshness.  Humor.  Tears.  They are all explored and on full display during various points of “Into the Lost Desert”.  A lot like life.

Even a life that the overwhelming measure of humanity cannot come anywhere close to comprehending.

“Into the Lost Desert” is currently available for viewing on Tubi.

"Into the Lost Desert" (2021): Extreme Exploration pushed to the Limit

"Into the Lost Desert" (2021): Extreme Exploration pushed to the Limit

Drama.  Tension.  Beauty.  Harshness.  Humor.  Tears.  They are all explored and on full display during various points of “Into the Lost Desert”.