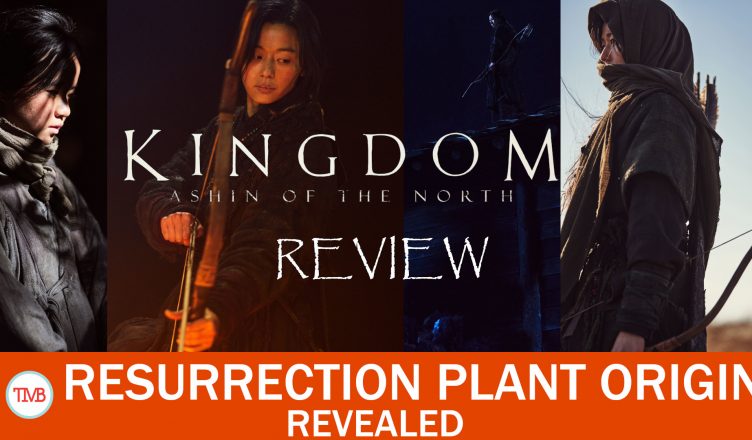 Kingdom: Ashin of the North explores the backstory of Ashin (Jun Ji-hyun), the mysterious heir of the Northern Seongjeoyain tribe village, and the origin of the resurrection plant that triggered an unprecedented cascade of tragic events that swept through the Kingdom of Joseon.

We finally learn the source of the zombie outbreak in this world! Kinda. We learn that the early zombies are a result of Ashin but the plot is not easy to follow. I find the different groups confusing and I keep confusing the different tribes. At first watch, I  I couldn’t get a grip on when this film took place. I admit it, its been a long time since I watched the first 2 seasons of Kingdom and I was really confused on the relation to the characters of the first 2 seasons. I kept looking for a familiar face to help anchor me but none came.

The plot isn’t made easier to follow when key plot points are delivered silently or off camera. We have to interpret dimly lit cave drawings to understand key events without any explanation. The whole origin of the resurrection plant and how Ashin is the source of it spreading is almost delivered in passing. The pacing can also be problematic for people. I came into this hoping to dive into some zombie gore-fest of a mess of a movie but what I got was a nuanced, articulate take on tragedy and revenge. This eventually grows into the gore-fest that I love but it takes a while to get there as the first half is mostly about the backstory and build up of Ashin.

It’s a really good thing that it’s easy to enjoy Ashin as a character. I really like the growth and development we see with her Ashin throughout her youth to adulthood. We learn about her goals, her motives and her personality. This is a cool revenge tale where the main character isn’t trying to fight or survive the zombie outbreak, rather she weaponizes it.  Ashin, IMO, is basically the punisher with a sick affluence for using zombies as bullets.

I do wish they delivered a bit more with the zombies. Zombie appearances and their use in this special episode was kept to a minimum. I wanted to see people trying to survive and maybe root for some of the characters. This is not that. This is a revenge tale…