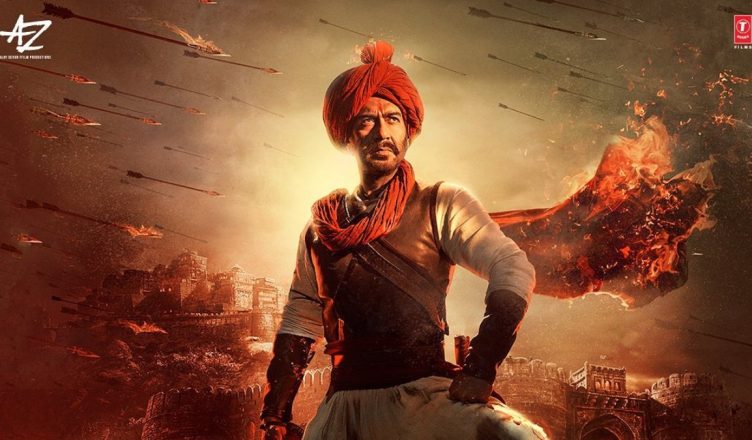 It doesn’t take a hero to order men into battle. It takes a hero to be one of those men who goes into battle is an inspirational quotation by U.S. army general Norman Schwarzkopf. The Maratha folklore has one such story of a heroic but forgotten warrior named Tanaji Malusare, who served as a military assistant to the ever popular Maratha ruler Chhatrapati Shivaji Raje. Tanaji’s reference came from a piece of poetry written by the great Indian poet Tulsidas.

Bollywood has come out with an epic period action drama based on the life of this legendary warrior. Written and directed by Om Raut, Tanhaji: The Unsung Warrior stars Bollywood’s veteran actor Ajay Devgan in the titular role of Tanaji Malusare. Saif Ali Khan plays the role of his arch rival and one of the most fearsome daredevil warriors in the Mughal Empire, Udaybhan Singh Rathore. Trust me, if you happen to watch this movie, you are surely going to experience a heart-stopping clash between two historic titans.

It’s the year 1665 and Shivaji (Sharad Kelkar) is captured by Mughal emperor Aurangzeb (Luke Kenny) in the Battle of Purandar. Aurangzeb captured Shivaji as the latter was on a quest to rapidly expand his reign in the Deccan region of India. Along with Shivaji, he had also captured the 23 forts that Shivaji had under his control.

Meanwhile, Shivaji’s mother Jijabai (Padmavati Rao) got insulted by the Mughal general Beshak Khan (Nissar Khan) when he captured and vacated the strategic fortress of the Marathas known as Kondhana (present-day Sinhagad fort). She couldn’t take this insult and vowed to remain barefoot until the Marathas would recapture the fort. Five years later, Aurangzeb assigned the Kondhana fort to his brave and lionhearted general Udaybhan Singh Rathore so that no intruder would ever dare to even set sight on the fort, let alone capture it. Aurangzeb had also planned to use this fort as a base for his imperial expansion in the Deccan region.

This news reached Shivaji through a spy. He planned to recapture the Kondhana fort by any means and foil the intentions of Aurangzeb. Shivaji’s able general Tanaji was not available at that time as he was busy preparing for the upcoming wedding of his son, Rayba (Arush Nand). Hence, Shivaji planned to pursue the fort capturing campaign all by himself. He had warned his generals not to inform Tanaji about this campaign as he didn’t want to involve him in this matter during such an auspicious ceremony. As time passed, the Marathas started preparing for the war. However, this news could not be kept a secret from Tanaji for very long. When he visited Rajgad to invite Shivaji to his son’s wedding, he was somehow informed about this campaign by one traitor in Shivaji’s palace named Chandraji Pisal (Ajinkya Deo). He immediately postponed his son’s wedding and sought permission from Shivaji to allow him to lead the campaign.

The story takes another dimension as Udaybhan reaches Burhanpur. The Marathas came to know about his arrival and coined their attack plan on him. Pisal being a traitor, immediately sent his nephew Chultya (Kailash Waghmare) to inform Udaybhan about the attack plan of the Marathas. Actually, Pisal had planned to foil Tanaji’s mission so that Shivaji could be overthrown and he would then join hands with Udaybhan. As a result, Tanaji’s attack plan got foiled miserably and he got deceived to such an extent that he ended up attacking his own soldiers! The furious Udaybhan reached Kondhana and threatened Shivaji’s safety. He threatened to bombard Rajgad with a huge canon which he kept aimed from the Kondhana fort. This canon was the atom bomb of that era which was powerful enough to destroy the city of Rajgad in a single shot!

The betrayed and dejected Tanaji on a pursuit for Udaybhan, reached Kondhana all alone. However, he had other plans in mind. Upon reaching Kondhana, he started brainwashing the villagers against Udaybhan. The villagers got brainwashed and turned against the barbaric dictator. Taking this advantage, Tanaji managed to capture the traitor Chultya and kill him. This news reached Udaybhan and he roared out like a caged lion! He captured Tanaji and tortured him severely.

You might be surprised to know that in spite of his ferocious nature Udaybhan was a lover as well! He was love stricken to his Rajput general Jagat Singh’s (Vipul Gupta) sister Kamla Devi (Neha Sharma). However, Jagat Singh never wanted to hand over his sister to the dangerous Udaybhan. Thus, he secretly released the imprisoned Tanaji and pleaded before him to save him and his sister from Udaybhan’s clutches. Tanaji assured them of their freedom and fled from the place. He returned to his city Umrat and informed the people there about the upcoming war. He also met his wife Savitri Bai (Kajol) and told her that he would return and celebrate their son’s wedding after defeating Udaybhan.

The war was set and it was time for action! Tanaji attacked the Mughal-occupied Kondhana fort on February 4, 1670. In the commotion Jagat Singh escaped with his sister. Now it was him versus Udaybhan! The two titans clashed and a ferocious one-on-one fight endured. Here you will witness the most disastrous scene ever! UdayBhan had lit the canon which was supposed to bombard Shivaji’s Rajgad and Tanaji just in time managed to chop off its lighted wick. But what happened next will make you shudder! While Tanaji was doing this, his right arm got chopped off by Udaybhan. The ending scene shows him battling Udaybhan with only one arm while the latter was delivering blows with his sharp sword upon him. Even when there was no hope left for Tanaji, he stood up for the sake of his beloved ruler Shivaji. He chained Udaybhan to the huge canon and pushed the canon till it started falling off from the edge of the towering Kondhana fort. Udaybhan fell along with the canon and was killed.

The injured Tanaji fell to his knees as he held the victory flag of the Marathas at the Kondhana fort with his left arm. With Udaybhan dead, the Kondhana fort was captured by the Marathas. The brave warrior Tanaji finally succumbed to his injuries. Shivaji along with his army entered the fort and mourned Tanaji’s death. Later, Shivaji personally oversaw Rayba’s marriage. This battle was titled as the “Battle of Sinhagad” in Indian history. Tanaji’s name was written in golden words in the Maratha history as he was indeed that unsung braveheart hero whom the Maratha army truly deserved.

Once in a lifetime cinematography

Mark my words, the artistic cinematography by Keiko Nakahara in Tanhaji has barred all barriers. The cinematography is one of the major aspects which set this film apart from other historical dramas in Bollywood. No doubt, the immaculate editing by Dharmendra Sharma might have done the wonders. Tanhaji was also released in 3D and I must say, the 3D viewing experience was simply awesome! Upon experiencing such amazing visual effects, I felt as if I had time traveled to the 17th century war stricken India.

Believe me, even if you don’t watch this movie, you might not want to miss out the final “Battle of Sinhagad” scene which showcases the epic fight between Tanaji and Udaybhan. Watching this fight in 3D made me feel as if they both were fighting just in front of me. Jokes apart, I shouldn’t have been so engrossed in the movie that I didn’t even care to stop them!

I must say that Ajay Devgan and Saif Ali Khan both carried out their respective roles to utmost perfection. They simply stole the show with such a marvelous arch rivalry plot. Saif Ali Khan did appear to me as a real life barbarian in the movie, which made his acting unparalleled. He was shown killing his own soldiers who were not able to carry out their tasks competently. I must tell you, these scenes were gruesome.

I found the dialogues in Tanhaji to be mind blowing! One dialogue by Tanaji to Udaybhan when he got captured and tortured was, “Har Maratha paagal hai…Swaaraj ka, Shivaji Raje ka, Bagwe ka” which means “Marathas are crazy for their beloved Shivaji and his self-rule policy”. The way he narrated this dialog was amazing, all tied up when he looked at Udaybhan with vengeful eyes.

The plot ends up as fictional…this was not how Udaybhan actually died!

The ending scene in Tanhaji was cooked up by Devgan and Raut. Very true, Udaybhan and Tanaji did fight and Tanaji fought like a lion. But if sources are to be believed, it was actually Tanaji who was killed by Udaybhan during the fight. It was Tanaji’s uncle and companion during the Battle of Sinhagad, another Maratha warrior named Shelar Mama, who actually killed the hefty Udaybhan after Tanaji was killed by him. I don’t know how real or how fictional the legend of Tanaji goes, but I believe Bollywood has got a tendency to spice up matters often.

The narration was not proper

Honestly, I didn’t find the narration in Tanhaji by Sanjay Mishra to be appealing enough. I believe that if Devgan and Raut could have considered opting for a different narrator, things might have sounded better. Mishra’s voice in the screenplay did not match up to my expectations.

The real name of this brave historic warrior was Tanaji. However, the filmmakers named the film as “Tanhaji” for censorship issues. No matter what the actual story may be, I personally find Tanhaji to be a complete entertainment package which has been spiced up to its brim by Bollywood. If sources are true, it is said that Ajay Devgan being one of the producers of this film, took the filmmaking work in his own hands. It is also said that the incidents shown in Tanhaji are more or less fictional and are a product of Devgan’s wild imaginations.

Supporting actors Sharad Kelkar and Luke Kenny played their respective characters of Shivaji and Aurangzeb pretty well. You will be surprised to know that Kajol being the real-life wife of Devgan, played his reel-life wife in this movie. The songs in Tanhaji are patriotic in nature, however they didn’t appeal me much.

Overall, Tanhaji portrays that sense of love, courage and sacrifice that Indians had for their motherland during earlier times, which is largely lacking in today’s youth. Even if I’m still unsure of what “actually happened”, I find the ending scene where Tanaji bravely fought Udaybhan even after losing one arm to be salute-worthy. It is a sad reality that Tanaji was actually killed from the blows he received from Udaybhan’s sword. Although Bollywood has showcased something which is far from reality, I personally find this 2 hours and 15 minutes historical action drama to be a masterpiece among Bollywood’s movie collections. 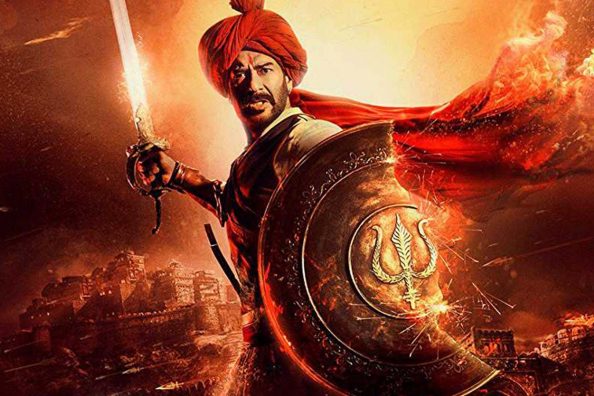 Here’s Your Chance To See ‘In The Heights’ For Free!

Why Ethereum Is Gaining Profit In 2021?