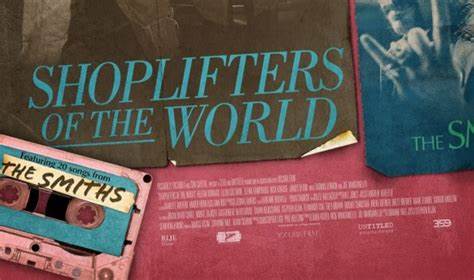 Starring Helena Howard, Ellar Coltrane, Elena Kampouris, Nick Krause, James Bloor, Thomas Lennon and Joe Manganiello Written and Directed by Stephen Kijak In the Summer of 1987, four friends, reeling from the sudden break-up of the iconic British band The Smiths, embark on a night out of partying to mourn their musical loss. At the same time, an impassioned Smiths fan takes a local radio DJ hostage at gunpoint and forces him to play nothing but Smiths tracks. With the radio station playing as the soundtrack to their night, the friends go on a wild journey of self-discovery that will transform them forever. Featuring an incredible soundtrack – including 20 songs from The Smiths – Shoplifters of the World is a glorious ode to the craziness of the ‘80s and the power of music to change people’s lives.

I was emotionally blown apart when John Lennon was murdered. Viscerally so. And I don’t even really remember The Beatles as an active band. I fell under their magical musical spell years after they had broken up. So I understand deeply meaningful connection to “close friends” we’ve never met.   And the sudden, devastating loss thereof.

Enter the new period drama “Shoplifters of the World”.   We are transported back to 1987 and dropped into an evening of hard partying, and even harder decisions, among five young people aimlessly atrophying away their daze in Denver, Colorado. This quintet’s collective favorite musicians of all-time, the mope rock group The Smiths, have just publicly called it quits. And these kids are waaayyyy bummin’ about it.

And that’s your story.

Oh, we get more than most of us care to from the disbanded band here.   That is, unless listening to incessant lyrics about killing oneself and others, if not physically, than of the soul, is something that appeals to you to occupy an hour and a half of your life.   Which, apparently to many among us, it did, and still does, as these four British bummer boys have sold a mess of albums to an adoring, if certainly not cheerfully giddy, fan base.

Moreover, we are not inspired to care on any level about a single character we meet in “Shoplifters”. Every last one is depressingly lost, self-absorbed, self-pitying and uniformly uninteresting. Even when the highjacked metal rock radio DJ (member to a stultifying sequence of stupidity in this sorry story) broadcasts a change of heart regarding all stuff Smiths, the declaration rings as disingenuous drivel.

Toss on the puzzlingly derisive depiction of law enforcement as abjectly imbecilic. Then, on top of that, dump the disdainful derision of the dude who dares to declare that joining the Army will be good for him in his rudderless life. And ultimately we are left to surmise that Writer/Director Stephen Kijak, to whom all of this is attributed and incorporated by, evidently intends to impress (some of) his audience as being an edgy, anti-establishment pseudo-statesman for “the enlightened”.

Or, like this reviewer, that he has supplied suffering sufficient to space jam “Shoplifters of the World” into a capsule and blast it off to another poor, poor planet far, far away.

And take The Smiths with it.

"Shoplifters of the World" (2021): "Celebrating" the most Despondent Band in Earth's History

"Shoplifters of the World" (2021): "Celebrating" the most Despondent Band in Earth's History

Writer/Director Stephen Kijak, to whom all of this is attributed and incorporated by, evidently intends to impress (some of) his audience as being an edgy, anti-establishment pseudo-statesman for “the enlightened”.