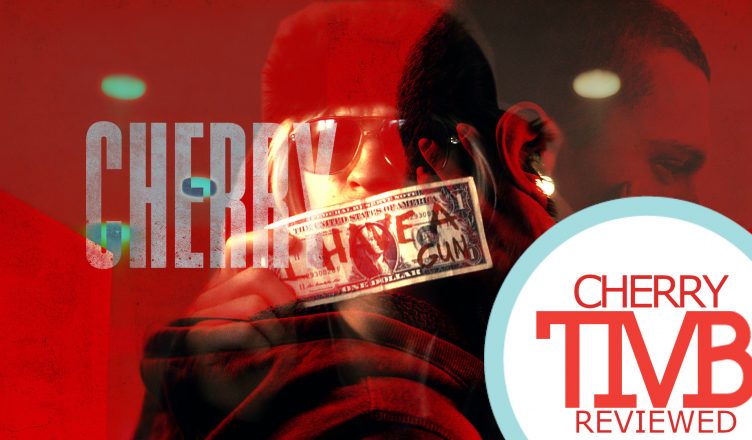 Cherry (Tom Holland) drifts from college dropout to army medic in Iraq-anchored only by his on true love, Emily (Ciara Bravo). But after returning from the war with PTSD, his life spirals into drugs and crime as he struggled to find his place in the world. 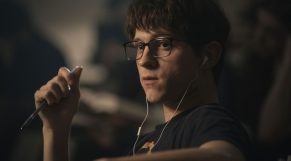 I like the coming of age story of Cherry. We follow a young man as he’s entering college and adjusting to his new life. I also love the different era’s of Cherry’s life that we cover. We get to see the young boy in college, army soldier, the army veteran and then finally the addict. I’m also a sucker for the ‘boy meets girl’ story. Cherry develops a relatable attraction to Emily in an almost ‘Peter and Mary Jane’ romance. Their romance is propelled by the pain of breaking up with his ex-girlfriend and you can’t help but want to root for their relationship.

There’s a humor to Cherry that’s really funny. Thankfully Tom Holland breaks the 4th wall to lighten the mood through otherwise tense moments. More than once I felt that Tom’s timing and tone helped turn a tense moment into a moment that was somewhat comical. Cherry robs banks but makes an effort to be polite to the female bank tellers he is robbing because he respects women. Love it. 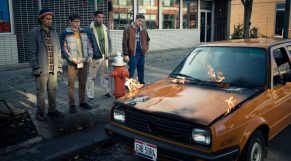 There’s more of this dark humor that is repeated in a lot of little details throughout Cherry. Almost anything written contains a silly amount of jokes. When you look at the the names of Banks and buildings, you’ll see silly names like “you’re not getting a loan bank” or something. These details help lighten the moments that deal with the most serious subjects. Cherry touches on issues like veteran health problems, financial issues, depression, and more. 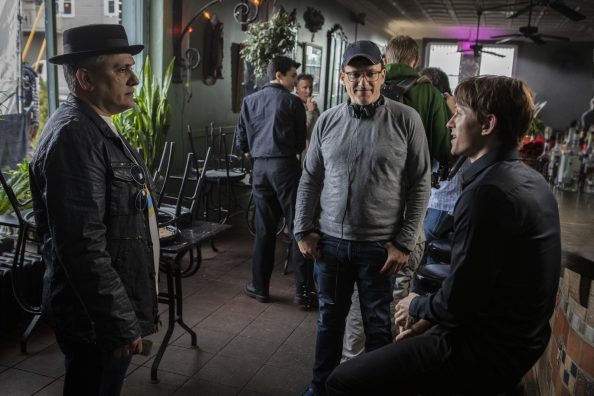 Joe and Anthony Russo have a visual flavor they layer over their films that’s identifiable. There is a use of color and choice of camera angles that are subtle but soothing making it easy to actually watch Cherry. Cherry also has a suspicious habit of creating scenes that are eerily similar to moments from completely different films. There are moments I believe are lifted right from Major Payne, Requiem for a Dream, and more. The Russo‘s know this and do more than homage, they recreate these moments in their own visual tone and style. 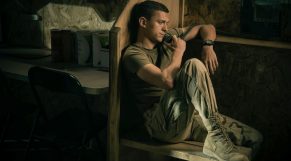 Cherry suffers from a lack of investment in the main character. I don’t feel invested in Cherry’s success or failures. Heck, over time, I even stopped caring if Cherry and Emily live happily ever after. I don’t care, and I’m as invested as I am when watching a car wreck in slow motion. Cherry (the character) also has a very interesting assortment of friends. Cherry’s friends float in and out of coinciding with different stages of his life. Each of these friends have a narrative and backstory that is equally, if not more, interesting than whatever is going on with Cherry.

Cherry (the film) suffers from some really slow pacing with the progression of its narrative. There are 4 major acts that show the different stages of Cherry’s life. I can’t help but I can’t help but feel there was at least 1 too many. At it’s best Cherry (the film) tries to break new ground with its slick cinematography, familiar tones, and the performances of the actors. At its worst Cherry, (the film), stumbles on an idea progresses a sub-plot but not doesn’t help the overall narrative. Cherry is frustrating because you get a sense of identity crisis as the film attempts to juggle multiple tones. 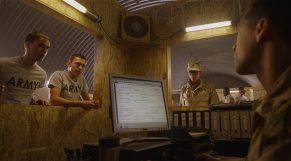 I like how, comedically, Cherry imitates comedies from the past and recreates moments however I don’t like how Tom Holland seems like Peter Parker. It could be me. I think Tom  tried to adopt a different accent, walk and look but his performance is essentially Peter Parker. We could even argue there are scenes that homage Sam Raimi’s Spider-Man 3, but that’s beside the point. I walk away feeling that the character is intentionally being written as a Peter Parker. We’re watching an episode of “What If Peter joined the army, got back, and decided to rob banks and do drugs”.

Cherry is an interesting if not annoying movie. Annoying in that you want it to succeed in elevating itself into a truly memorable movie but it gets in its own way. Cherry has an insistence to painfully stretch out scenes. A unexpected benefit is in seeing Peter Parker curse, and the sheer beauty of the Russo’s presentation such a spectacle.  These are the moments where Cherry is really good, but suffers from pacing issues. I would love if this gets converted into a mini-series broken into 4 episodes rather than 1 long movie.