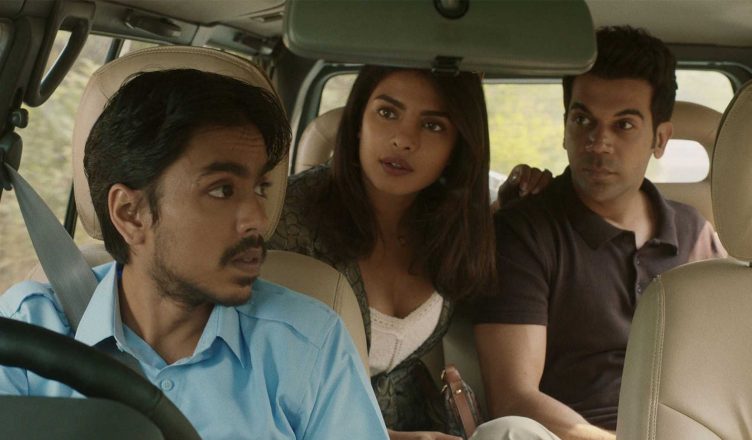 It’s time to move aside Tiger King because there is a new tiger in town! Written, produced and directed by Iranian-American director Ramin Bahrani, “The White Tiger” is a movie which narrates the story of a poor Indian “chicken-coop” guy named Balram Halwai and his dark and humorous journey to become a successful entrepreneur. Our hero Balram, played by Adarsh Gourav, is one of those simple yet ambitious poverty-stricken people of the modern Indian society. His simplicity is taken for granted which provokes him to take the path of cunningness and rise and shine in life.

The White Tiger is an energetic Indian drama which is adapted from the award-winning novel of the same name written by Aravind Adiga. This film has a plot filled with life and humor upon watching which we can get an idea that things are going to turn to a darker side. The plot revolves around Balram, who makes his way to become a driver for Ashok (Rajkumar Rao) and Pinky (Priyanka Chopra-Jonas) and drive their gleaming Pajero SUV. Ashok and Pinky are a rich couple who have just returned from America and Balram, as he is trained by the typical Indian society, becomes their indispensable and faithful servant. But things take the dark turn when he was made to sit at the back seat of the Pajero car with Pinky driving and Ashok seated beside her and they got involved in an accident which resulted in the death of a child. After that, he gets betrayed by Ashok and Pinky into signing a confession that he was the one who was driving the car at the time of the accident. He thus realizes the harsh truth that they will go to any extent to save themselves, whether that be at his cost! From here Balram rebels against all odds and rises up to become the new tiger king of the societal jungle.

As per my opinion, the title of this movie is apt because it portrays the harsh circumstances faced by a man, which ultimately leads him to break out of his personal cage like a tiger and claw out of the hellhole.

This movie sheds light on the typical Indian society

As an Indian citizen, I can see issues like social inequality, caste system and the culture of servitude to be prevalent in my country. As per my judgement, The White Tiger is capable enough to raise awareness among the public about these social evils. This film successfully portrays how the poor are still being taken for granted by the rich and affluent class. It even highlights the master-servant relationships in India, where at times servants do get oppressed by their masters.

An inspiring story for the oppressed class in India

From this movie the poor and oppressed class can learn to better their lives. What Balram did is somewhat fictional as “breaking out of the cage” is not possible for each and every person. But when circumstances prevail and there remains no option, then it becomes better to do it for the good.

I feel Adarsh Gourav has brilliantly portrayed the character of Balram and his struggles to achieve fame in the hell of a society. Priyanka Chopra-Jonas has made no mistakes in playing her role of a feisty chiropractor named Pinky and wife of U.S.-educated Ashok. However, what strikes me is Ashok’s accent which seems too put-on to be effective.

Hollywood seems to have the same old mentality towards the Indian society. The White Tiger’s plot, no matter how interesting it may be, appears to be a new generation version of Danny Boyle’s Slumdog Millionare. Slumdog Millionare was no doubt an Oscar winning film. However, in my opinion Hollywood needs to come up with newer ideas and plots with regard to the Indian society rather than focusing every time on some poverty-stricken fellow who struggles and uses his cunning ways to achieve a billion dollar reputation.

The plot involves Balram murdering Ashok and escaping with a large amount of bribe money to later establish himself in the city of Bangalore by the name Ashok Sharma. This kind of criminal activity should never be a lesson for any person who is trying to achieve something in life. Murder is a heinous act which can never be pardoned. Balram could have tried out other ideas and should have taught his master Ashok a lesson instead of killing him. The manner in which he “broke out of his cage” was not just wrong, but dreadful.

Overall The White Tiger is a “worth the watch” movie comprising of an effervescent camera-work and a poppy soundtrack. As per my opinion, this film is indeed going to entice the mass audience. Executive-producers Priyanka Chopra-Jonas along with Ava DuVernay have proved to be true guardian angels for this project with their exceptional production work. The cinematography by Paolo Carnera is excellent as it captures both the real-life grit and the dreamy and aspiring character of Balram precisely. But let’s not forget the snappy editing done by Tim Streeto and Bahrani which is indeed a main contributor towards adding life to this film.

If you ask me, then yes! The White Tiger is a complete watch package. The storyline is too fictional as it is not possible for every man to become a “tiger” and go on a rampage. However, if you are looking to get yourself entertained with an engrossing movie on Netflix, just go for this one!