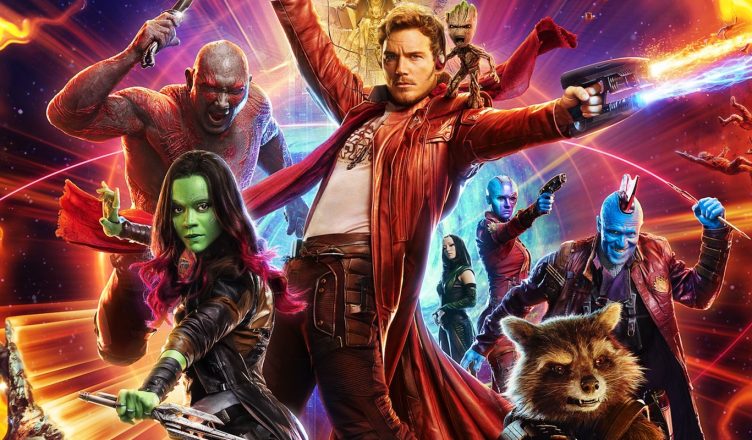 So we are onto Vol. 2 in the Guardians Marvel mix tape, and it is different than the first one. While familiar faces are back, the focus is a lot different. This is a franchise that knows its identity, but isn’t afraid to change it up, as they did in Vol. 2. I enjoyed the Guardian’s shenanigans at the drive-in outside of Chicago, which is pretty damn cool. Yes, I did pay attention, it’s called multi-tasking. Ha! So what’s there to like and dislike this time around? Read up and make your own judgement.

As I mentioned in the intro, things are kinda different in this sequel. I liked that they allowed themselves to veer off a bit and focus on other characters. Kurt Russell makes his Guardians debut as Ego (he has quite the one), the father of Peter “Star-Lord” Quill (Chris Pratt). Though daddy may not be actually looking out for Peter’s best interests as it seems. If you have a Cash, you may need a Tango, right? See for yourself what they do about that. Even though the plot is hinges on Star-Lord’s parental identity, Yondu (Michael Rooker) is the focus on this movie and plays a critical part in the plot. I was pleasantly surprised that Yondu is the star of Vol. 2. If you didn’t think Yondu was a badass, you will after this. Recently Logan had his moment, now it’s Yondu’s turn.

The movie has a lot of fun moments. The comedy may be even better this time around and it comes from different characters. In the first one, Quill and Rocket dominated the comedy, but in this one it’s definitely Drax who is the one with the one-liners and best comedy spots. His matter-of-fact deadpan humor really works. Rocket seems to take a bit of a backseat, but he still faces raccoon discrimination. There is no denying that Pratt is still the main star of this franchise, but credit him and the filmmakers for stepping aside and let the other actors and characters take some shine.

Ok, so Groot is clearly the character that delivers the most heart and emotion. He did it in the first one by sacrificing himself, which lead to us getting Baby Groot! That thing is frickin’ adorable. Grown man, woman or child, everyone and anyone will love Baby Groot. He’s so cute and fun. One of the funniest scenes in the movie is between Baby Groot, Yondu and Rocket. I won’t give it away, but Groot is fetching all sort of things for them and it’s hilarious. A legit gag reel that was left in the movie. One of the best scenes.

Seemed to me there was less talking and more action and battles in Vol. 2. The first one had more physicality and hand-to-hand combat, this one let the machines and gadgets do the battles. Everyone takes part in the battles, but they seem to do less individually, a group effort is where it’s at. It felt like they had more locational changes and hopped from one place to another, which added a faster pacing to the movie.

The first movie was memorable for the music as much as the characters and story itself. Well, they dropped the ball on the musical soundtrack this time around. The first movie just oozed with classics from the 60’s and 70’s, but this one lacked any noticeable beat and rhyme from a song. They held off the classic music that made the first film synonymous and unique. The entire marketing and title inclusion of “Vol. 2” and “Awesome Mixtape #2” proved to leave a lot to be desired. Awesome mixtape #2, wasn’t very awesome or memorable. Off the top of my head I can’t even think of one song I remember from this movie? They had a great and easy opportunity to continue the classic music mixtape tradition, but fell flat.

Can someone tell me what’s the appeal of Gamora (Zoe Saldana)? She’s such a useless and dull character. Yes, she’s Quills love interest and the only girl, but for goodness sake is she forgettable. Character newcomer Mantis (Pam Klementieff) is a lot more interesting than Gamora ever was or will be. Go away Gamora!

A personal gripe I also had was that even though the movie starts out with action, it just feels slow and uninteresting for the the first 15 minutes.

One thing is certainly cemented in the movie, and that is the fact that this isn’t a superhero movie, it’s a space adventure movie. It is a lot more similar to Star Wars and Star Trek, than it is to majority of Marvel and superhero movies in general. Vol. 2 ramps up on space adventure action with a lot of scenes that take place in flying objects, the combat is held in air. It really reminded me of Star Wars with all the spaceship battles. This is the true identity of this franchise, space, not necessarily superheroes.

This Guardians is fun and entertaining even though it’s not overly similar to the first one. I liked the focus on the supporting characters that had a lot less impact previously. Ultimately Vol 2 doesn’t miss a beat and it carries the torch as a unique off-beat Marvel franchise that is a lot of fun. Things are shaping up nicely for Infinity War. Make sure to stick around for 5 end of credits scenes, all have some sort of a preview and tease of what’s to come down the line. MCU phase 3 is on a roll and this movie is aboard the ride.