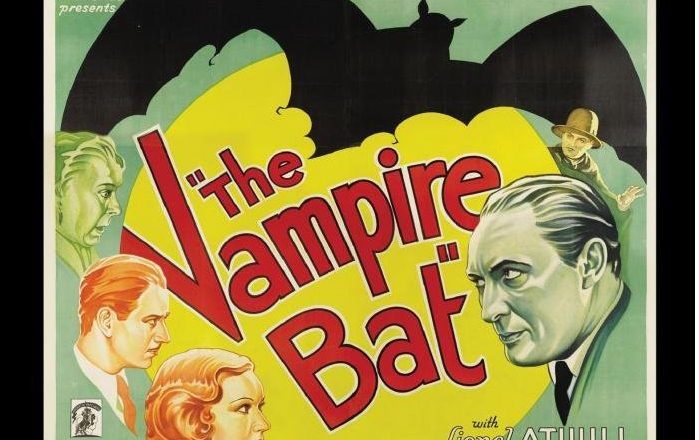 When corpses drained of blood begin surfacing in the small European village of Kleines Schloss, town elders suspect a vampire is on the loose, but policeman Karl Brettschneider (Melvyn Douglas, Ninotchka, Hud) doubts the existence of blood-sucking creatures.

Amid mass hysteria, fingers point at the village idiot, Herman Gleib (Dwight Frye, Dracula, Frankenstein), who has a creepy affinity for bats.  But after local vigilantes eliminate him from the picture, the killings continue … and Brettschneider tries to keep a cool head as he reluctantly starts searching for supernatural answers.

I love these ‘golden age of horror’ cinema gems! I’m the one you’ll find turning on Turner Classic Movies hoping their playing a Bela Lugosi, Boris Karloff or Lon Chaney classic.  This is no different. The Vampire Bat tells the story of strange happenings in a small village in Europe.  Corpses are popping up left and right, all drained of blood.  So of course you have the towns folk who swear it means there is a vampire on the loose.  You also have skeptics who don’t believe in such things.  One of the main skeptics is policeman Karl Brettschneider (Melvyn Douglas).  His girlfriend Ruth (Fay Wray) is the lab assistant for Dr. Otto (Lionel Atwell).  Dr. Otto is a mad scientist who doesn’t think it’s too farfetched to believe that a vampire could be in their midst, but clearly there’s something sinister going on with Dr. Otto.  Where there’s a mad scientist you know there’s got to be a laboratory with bubbling beakers.  Makes it extra spooky.  There is also some comic relief in the form of Ruth’s eccentric Aunt Gussie (Maude Eburne).

The Vampire Bat first debuted in 1933 and very recently was released on special edition Blu-ray & DVD by The Film Detective in conjunction with UCLA Film & Television Archive.  This digitally remastered film showcases a crisp picture which is nice because sometime with these older films some scenes tend to look dark, so dark that you can’t much see the set or actors clearly.  Bonus features on this release include a Melvyn Douglass featurette with his son Gregory Hesselberg and audio commentary by film historian, Sam Sherman.

Not much bad to say about this one. You get what you get with these classics.  It’s similar to a lot of the others from the same era.  So if you’ve seen Dracula and Frankenstein and are not really into films in that same vain, then this is not for you.

I enjoyed this film very much. If you’re into the classics, you need to see this one.  And even if you’re not into them but you love horror, you should see this if only out of respect to the genre.  It’s just over 60 minutes so it’s an easy watch.