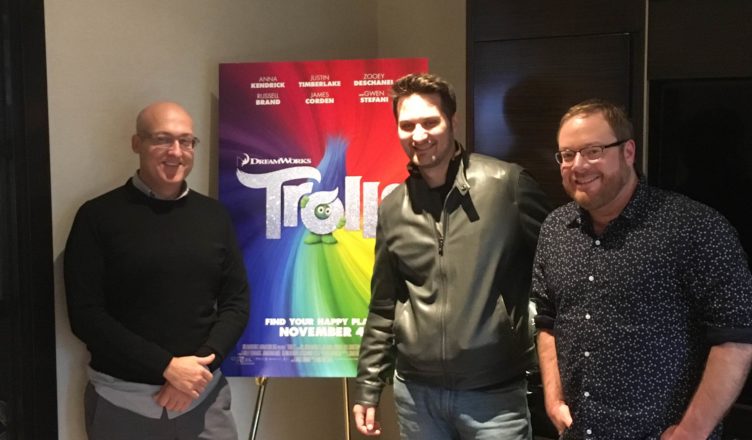 While in Chicago on a promotional tour, I had a chance to speak to Mike Mitchell and Walt Dohrn who are the writers and directors Trolls (in theaters November 4). Mike and Walt discussed the making of Trolls and all that went into it. There are some fascinating revelations that come out of the interview. I had a blast talking to the guys, hear it all below:

Mike and Walt were tremendous. Great guys and really down to earth. They were so engaged and excited about talking about the movie, which was great. I was pretty surprised when they revealed that Justin Timberlake’s “Can’t Stop the Feeling” was made for the Trolls movie, and then it turned into a worldwide hit. I really got a kick out of the fact that Walt referred to Justin Timberlake as “The Scientist of Pop Music”. I love that nickname. Just super cool to find out about the huge influence Timberlake had on the movie. I had to mention Surviving Christmas to Mike, who directed the movie. I liked his reaction to it. It’s really an awesome fun Christmas movie, still don’t get why it didn’t get any love. Just a privilege for me to talk to such passionate and talented filmmakers like Mike and Walt. They do really do great work and I can’t wait for Trolls 2.