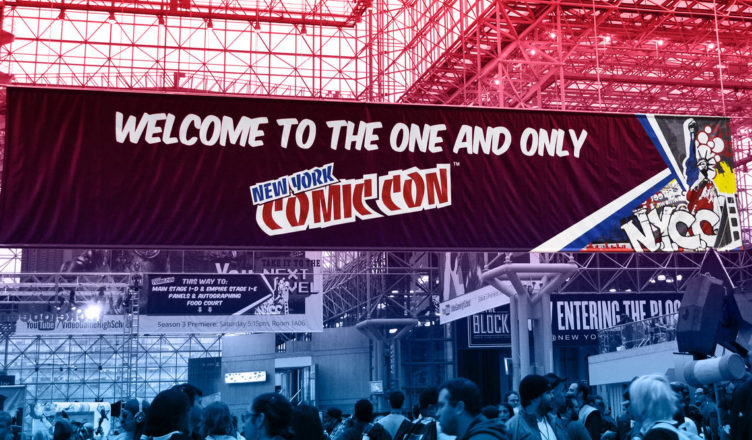 The L.A. Comic Con just passed and it got me reflecting on this year’s New York Comic Con – what I hated, what I liked, but most importantly, how I’ve grown. Last year was my first time ever at a Comic Con. So everything was AMAZING, a SPECTACUAL, a GRAND WONDER! I wanted to live there for the rest of my life. I almost cried when I had to leave. Why? First because there were so many other items I wanted to get, and secondly, I had to wait a whole year for it to return. It crushed me as a man. The only thing that kept me going was planning for the next time. I set a seven hundred dollar budget for the entire four days. And, I know seven hundred is a low number, but I couldn’t justify to my girl spending a thousand dollars on “toys”. I know I used the “t” word. The day finally arrived and I couldn’t be any happier. I got there a lot later than I wanted to because of the MTA. If you don’t live in New York, you cannot relate, but for those that do, know the MTA is horrible, but I’ll digress. I got there and the moment I stepped into the Jarvis Center, a wave of euphoria washed over me. If I’m being honest I just walked around for about an hour with a big smile on my face. People probably thought my cosplay was pervert, but I’m okay with that. The cars were gorgeous, the woman were even more gorgeous, and they had a brunch load collectables for sell. Say what you want, but I was in heaven. I sat down, got something to eat. (SIDE NOTE: The food prices were too damn high!) After I got my thoughts together, and I was able to set out my journey to look for… weapons!

Anyone that knows me, knows that I love swords and knives. What better place to get both of these than at New York’s Comic Con. Last year, I missed out on a Thundercats’ sword, and this year I wasn’t planning on making the same mistake. But, after 45 minutes or so, I couldn’t find no weapon booth. Not even a little prison shank. So, I threw away my pride and asked one of the staff members for direction (I acknowledge, I’m less than a man for that). He starts scrolling through the index looking for one, and after 30 seconds he said he can’t find any.  Instantly in my head I said, “This newbie can’t do his got-damn job, on the got-damn first day”. He said, “Hold on, let me ask my partner”. He starts checking and after 40 seconds, give or take, he looked into my beautiful eyes and told me something that would determine my mood for the rest of Comic con. From the look of my face, you would have thought he told me I had crabs. But, instead he said, there were no weapons allowed at Comic Con this year!!!!!!!!! I wanted to spit in his face. How dare he speak those words to me? I never been so hurt in my life. I was sure he didn’t know what he was talking about. I searched for the rest of the day and found nothing L . Broken and defeated, I went home asking, “Why would they do this”. Now look, I know what city I live in and I won’t turn a blind eye and act as if we don’t have a high crime rate – especially, this year with all the shooting taking place in public venues. But, I’m 99.99 percent sure that the thirty-five year old man dressed as Pikachu isn’t the one stabbing old ladies at the bus stop. If people are worried about violence, I would like to think it wouldn’t be the Comic Con.

Anyway, after this experience, everything just went to shit after that. Let me not say everything, really just two and a half. One were the panels. These panels are way too hard to get into. Last year, I didn’t care! There was way too much to do to begin with. Now that I have one year under my belt, I had time to spread my wings a little and explore. But, every opportunity was quickly shut down. How you might ask? To get into any of the good panels you have to be at Comic Con at the crack of fucking dawn to get your badge tapped, which in turn allowed you to enter the event. The first problem was everybody that’s there that early get their badges tap for anything. Which in turns causes the second problem. A butt load of empty seats. Which doesn’t look good, so you have a whole bunch of staff members just telling people to come in. Which begs the question why do any of the badge tapping if half the time it doesn’t work like it should. P.S.A: No one stays the whole day at Comic Con. Anybody that’s there at 9am left by 4pm. So showing an Iron Fist trailer at 7pm is stupid because most of the people that can get in are already gone. The second problem I had well….

This is New York Comic Con, I know it’s nothing compared to San Diego Comic Con, but guys. Where’s the big news? Where’s the exclusive clips from upcoming films? The four big things this year was Stan Lee, a Black Mirror episode, an Iron first Trailer, and a Justice League Dark viewing (ewww). People pay a lot of money to be at NYCC and to show us a throw away trailer, episode and or clips that would have been released or leaked online regardless is a little disrespectful. I’m not asking to see the whole Aquaman movie, but let it be something worth wild. Something to brag about to my friends and family. Needless to say, I still grew as a person. I learned some tips and tricks to stay ahead of the game, like just paying someone in the line to skip. Is it right? No, but you have to do what you got to do, right?! Overall, I would give NYCC as a whole a 7/10 because it wasn’t the best, but I know it could have been a hell-of- a-lot worse. Did you go to NYCC this year? How was your experience compared to past years? Let me know down in the comment section below.

P.S My half complaint were the people in wheelchairs. If you are handicapped, by all means do you, boo boo, but if you broke your leg prior to Comic Con… you just can’t go to Comic Con. Next year, I’m kicking legs forewarning.

I can’t pick my favorite between these two pictures. Help me decide plz :-).