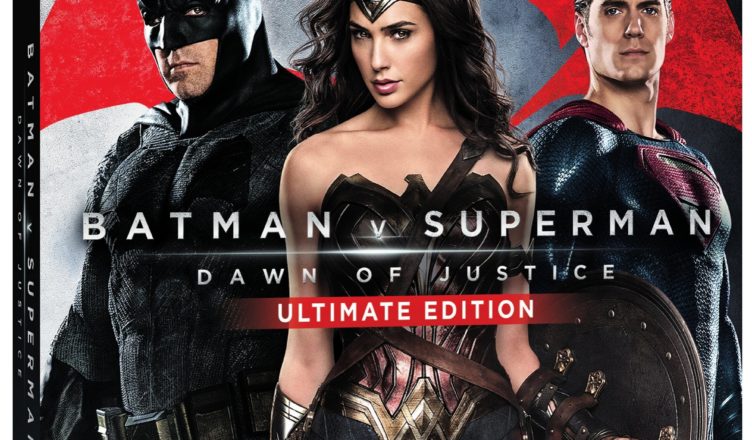 Synopsis: Batman and Superman face-off in the ultimate battle.

My affinity for BVS can’t be understated. I have always went to bat for this film, while many others have hated on it and picked it apart.  With the recent debut of the Blu-ray Ultimate Edition of the film, even the haters can’t argue much. Clocking in at 3 hours, the new extended cut offers a variety of scenes that complete any holes that theatrical version left off.

Want to know more about what happened in Africa in the beginning of the movie? Superman’s perspective on the Bat vigilante? Jena Malone’s appearance in the movie that wasn’t show in theaters. Additional scenes in Metropolis and Kansas. All these things are answered and included in the extended edition that adds an additional 30 minutes of new footage that wasn’t seen in the theatrical cut. I can’t stress how highly I recommend it.

So for those that need a refresher course or haven’t seen Dawn of Justice. What was the movie all about? Well, it’s Batman going up against Superman for starters. The film starts out as the events of Man of Steel are wrapping up. It really helps to see Man of Steel before indulging in this film. While Superman is battling Zod, we witness Bruce Wayne’s (Ben Affleck) perspective of what is going on. Wayne is pissed to say the least. His company employees are dying during the destruction, kids are losing parents and Wayne needs to save them from falling debris. Basically, he wants Superman accountable and punished for his actions.

After the battle concludes, we get to see the life of Clark Kent a.k.a Superman (Henry Cavill). Superman saves Lois Lane (Amy Adams) from some dangerous people in Africa. When he gets back, the Clark Kent version gets scrutinized at work as much as Superman is in the papers. Superman isn’t the favorite citizen of Metropolis anymore.

The action alternates between Gotham and Metropolis, until the two meet and do battle. Even though they are enemies at first, the lunacy of Lex Luthor (Jesse Eisenberg) brings them together.

I loved this movie. I felt that it had everything you could ask for in a Batman, or Superman movie. Great character buildup of Bruce Wayne/Batman, with enough room for some mystery to his past (the Robin costume trashed by The Joker). Loved how Ben Affleck took ownership of the role of an older and experienced Batman/Bruce Wayne. As Wayne he’s charming, humorous, but also serious and authoritative. He’s kinda suave, with his imposing broad shoulders and muscular look. As Batman he’s intimidating. His costume is dark and when he appears on-screen you feel his presence and made me bit in awe. He just surpassed Christian Bale as the best and most realistic Bruce Wayne, soon-to-be best Batman also.

The inclusion of Wonder Woman was done really well. One of the silly complaints about the movie was that there wasn’t enough of her and how she wasn’t utilized properly. She was in the movie more than enough, and her participation was significant. This wasn’t a movie called Batman v Superman v Wonder Woman. It’s a Batman v Superman film, so keep the focus there. Plus, Wonder Woman is having a solo origin movie coming out next summer.

I enjoyed the fact that the film gave you a taste of a lot of characters without feeling overstuffed due to the proper utilization of them. Having multiple main villains, such as Luthor and Doomsday didn’t deter one from another, they each posed as a separate and dangerous obstacle for Batman, Superman and Wonder Woman. To dispel another pointless worry that using your “ace” villain such as Doomsday was silly in a movie not focused on him. They made use of him and while it wasn’t lengthy the payoff  of him killing Superman was well worth incorporating him in the movie, if not just for that reason.

What DC and Dawn of Justice don’t get enough praise for was the balls it had to do what they did at the end. My only Marvel comparison will be that Marvel wouldn’t have the guts to sacrifice their main character as DC just did with Superman (even though it’s not permanent. Marvel had a chance and of course they couldn’t pull a trigger on sacrificing any character in a movie titled CIVIL WAR. Enough about them. The ending of Dawn of Justice left me with a gasp and surprise. Very bold and brave. It also sets up Justice League very nicely.

Man of Steel strongly hinted that DC would be going much darker and serious with the tone of their films, as opposed to their rivals who like to be very kid-friendly and colorful (promise I’m done with the Marvel talk). Dawn of Justice took it to another level with the dark tone and feel. Characters died. Dark pasts were exposed. Relationships were tested. They stayed true to their core values. The movie visuals were gritty and film noir-ish to an extent. Recently that tone was deflated with the results of Suicide Squad. On an individual basis, Dawn of Justice nailed its identity.

Ok, so there might have been a couple things that weren’t perfect. One such thing was the pacing. Things seemed a bit rushed towards the end. It’s understandable with all these characters and storylines taking place. Would have liked to see more of Doomsday, the preview trailers were the major culprit in exposing him, instead of saving it for the movie.

The mystery of the Jimmy Olsen character wasn’t addressed. He was the one that got shot in Africa, where he was on a story with Lois. To introduce and immediately dispose an integral character to the Superman universe was kinda disappointing.

That’s pretty much the only negatives I could pluck out. The ultimate edition fills in some of the other gaps that I previously had in terms of some of the characters, their perspectives, as well as extensions to some scenes that were rushed.

To me, BvS is a one of the two elite and personal favorite movies of 2016. Other being Me Before You (see I have range). Ultimate Edition accomplishes a lot in those extra 30 minutes. The movie never feels like it’s anywhere close to 3 hours. I strongly feel that BvS is one of the elite and best superhero movies ever. It has all the elements you could as for in a movie of this genre. Compelling characters with a backstory. Pleasing fight scenes. Well-crafted CGI. A great musical score from Hans Zimmer. Balanced action and drama. A smart set-up for the future of the franchise. Most importantly it’s bolder than most if not all of the previous superhero film. They killed Superman and didn’t bring him back. Enough said. Do yourself a favor, even if you disliked it for whatever reason the first time around in theaters, I can GUARANTEE you will enjoy the Blu-ray Combo Pack Ultimate Edition a hell of a lot more. One of the best Blu-ray/DVD purchases you can make, worth alone just for the bonus contents.