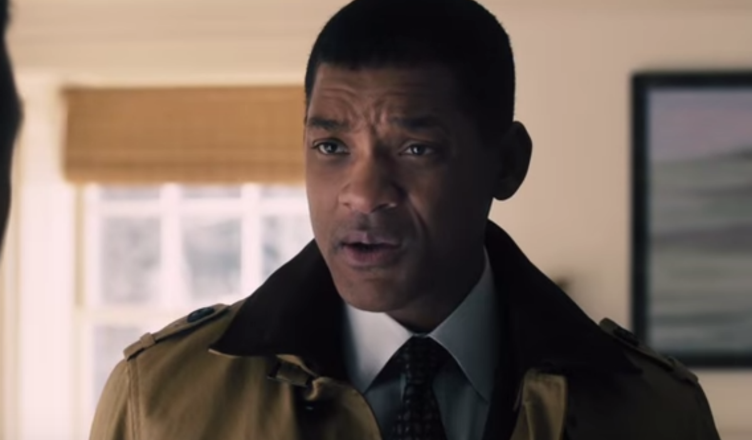 The NFL Playoffs are just weeks away, and your football Sunday’s might never feel the same. “Concussion” is designed to inform and educate about the dangers of football related head trauma, but the film spends equal amount of time telling the story of the man behind the research, Dr. Bennet Omalu (Will Smith). The story of Dr. Omalu is an American tale of success. A Nigerian immigrant whose dreams were to come to America and live the American dream, and he accomplishes that. His intense research that lead to the discovery of Chronic Traumatic Encephalopathy (CTE) impacts an entire sporting culture.

First half of the film focuses on Omalu the person. He’s a pathologist based in Pittsburgh with a weird quirk of talking to his dead patients and asking them to help him in discovering the reason of their death. It’s as endearing as it is odd. Omalu is oblivious to American’s love for football, heck, he doesn’t even watch TV. Omalu appears to be a good man, and that’s evident in his portrayal. He goes to church, he treats his dead patients with respect, and he even ends up taking in an immigrant girl from Kenya to his home. Omalu’s life changes when his patient is former Pittsburg Steelers great Mike Webster. The consecutive bizarre deaths of former Steelers drives Omalu to search deeper into what is causing these men to die young. That’s where the second act of football driven plot begins. Smith is terrific as Omalu, it might be one of his best performances ever, that includes “Ali” and “Seven Pounds”. He completely immerses himself portraying the real life Omalu. Everything from his accent to the nervous quirk with his thumbs. It’s a powerful performance that exhibits Omalu as a man of honor and one seeking respect. Every time someone refers to him as Omalu or Bennet, he corrects them by saying “Doctor”.

Concussions are a football problem, but the focus is on the NFL. Fairly or unfairly they are a professional league that profits billions of dollars due to their players. The film paints the NFL as this untouchable big bad wolf, which in truth it kinda is. While speaking about the power of the NFL, Alec Baldwin’s character attempts to explain the power of the league to Omalu by saying that the NFL owns a day of the week. Luke Wilson plays Roger Goodell, it’s a small part, but the film portrays Goodell as as the incoming brash NFL Commissioner that’s dismissive with the CTE issue.

Writer and director Peter Landesman attempts to heighten the stakes by showing Omalu being stalked and threatened by the NFL, as if they were some mob of gangsters. Whether that was indeed true or added for effect, it veers away from the subject at hand. The concussion issue was and is real, the apparent negligence by NFL and The NFL Players Association to ignore the problem former players were facing is unfortunate. The film manages to show some players pleading for help, not knowing what is happening to their brain, only to be dusted away by their own colleagues (Dave Duerson) dealing with the same issues. The NFL likeness, logos, footage, and names are all used in the film without much approval by the league. Surely the league isn’t glowing about the film, but they don’t want to further mud their reputation by going to battle with Hollywood, so instead they will just ignore the film, just as they have with CTE.

As with any movie that’s based on true events, one would be served to do some fact checking. Did the NFL really go to extreme measures of silencing Omalu? His discovery was the first domino that started a wide ranging debate in sports about player safety and brain injuries. This was a monumental game-changing find. The issue of science going against a sport that brings a vast amount of excitement and reverence prevents this issue from being accepted by everyone, especially the athletes themselves. “Concussion” might not do anything to threaten the NFL or football in general. What it does serve and accomplish is that it’s an eye-opening and understandable approach to an issue that is real. If a single parent, kid, or athlete decide to forgo football in order to preserve their health then the movie delivers its message. I won’t stop watching football after watching this film, doubt others will tune away also, but I’ll think twice before I cheer at that knockout tackle.