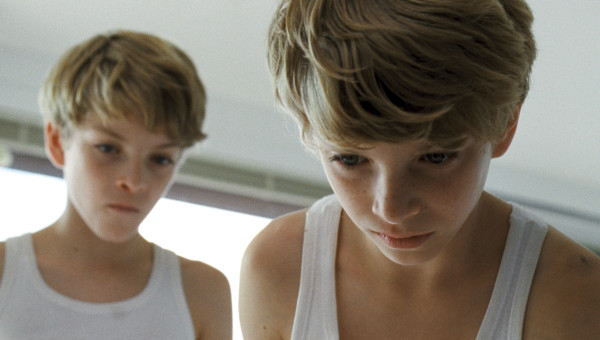 In the heat of the summer lays a lonesome house in the countryside where nine year old twin brothers await their mother’s return. When she comes home, bandaged after cosmetic surgery, nothing is like before and the children start to doubt whether this woman is actually who she says she is. What ensues is a terrifying observational struggle with fatal consequences on par with THE SHINING and DEAD RINGERS.

It is a conspicuously uneasy vibe established practically right from the start of the ultra-unsettling Austrian psychological thriller “Goodnight Mommy”.  And then from there all the way up to the haunting conclusion, Co-Directors Severin Fiala and Veronika Franz never take their feet off the pedal, unleashing an unrelenting and unsettling undercurrent of fear and dread. Following what we come to learn was a horrific auto accident, a single mother also only recently separated from her husband returns to her country home and to her twin pre-adolescent sons.  Severely damaged in the crash, her face is concealed in a grotesque guise of gauze and tape.  She has been helplessly rendered to revealing to her children only a mummy-like mommy looking back at them with empty eyes, one who ceaselessly scolds them through pursed lips, often times as she is at once bodily abusing them.  Mom’s off-puttingly odd behavior leads one of the twins, Lukas, to suspect that this is not their mother at all.  The other, Elias, is not so sure.  At least initially, that is.

We watch, gripped with fascination, as these kids struggle mightily to uncover who, or what, this curious creature is wandering about ominously in and around their house.  Where in the world is she from?  Or more alarmingly to consider, is she even of this world?  Is she actually an amnesiac, or is it all an act?  And what of these urgent and seemingly random episodes of OCD spray bottle disinfecting of walls both inside and out?

I generated a number of plausible themes running throughout “Goodnight Mommy” both during and after viewing.  Can a brutally battered and broken family be fixed?  Can a distraught mother completely overwhelmed with pain both physical and spiritual ever fully return from the hell of a nervous breakdown?  Or perhaps the ruthless reality that a post-traumatic existence is never endured alone, but is a shared suffering among all those infected in it’s aftermath. And there is still another message I considered while watching this film which I later abandoned as events progressively unfolded.  But in terms of another direction, “Goodnight Mommy” could well have become an engagingly unorthodox chronicle of the adolescent struggle for independence from the comfort, and comforting, zone of the mother.  Instead, this story presented a dynamic which was very much the opposite.

Not only are their roles exceedingly challenging emotionally, in addition these are physically punishing performances registered by all three principles in the film.  The slapping, punching and eye-gouging inflicted by real-life twin brothers Lukas and Elias Schwarz along with actress Susanne Wuest upon each other never appear to be simulated.  And while Wuest is certainly a stunningly beautiful woman to behold, the character she so strikingly inhabits is about as far from glamorous as can possibly be imagined.  I am forever a colossal fan of a performer’s commitment to investing all they’ve got to give into a role in any film.  And this trio of actors certainly did not fall short of personal expectations in the slightest in this regard.

The tables turn in terrifyingly twisted fashion mid-movie, as the persecuted become the exploiters.  The hunter becomes the prey.  What results is a starkly sordid demanding that love lost be replenished.  And all at the will of unconscionable sadism.  It is a genuinely disturbing disintegration to witness.

I am practically a lifelong fan of movies which effectively explore the dark side of human nature and inclination.  If well done, generally the more visceral the better.  This said, I prefer that these films investigate some sort of relevant message or point, as well.  As I hope to have made clear, “Goodnight Mommy” succeeds gloriously across the board in terms of what I need to feel that my time, attention and emotional investment have all been worthwhile.  And for this, it is a resounding “must see” viewing experience among the host of 2015 releases I have consumed to date. In the closing sequence of “Goodnight Mommy” we realize that we have returned back to the beginning of the story-the perfect picture of a mother and her children.  Only we are abundantly aware that this is a final image which, while by nature eternal, has been reached at the end of a viciously cruel and merciless road paved with unspeakable grief and atrocity.

Right up my alley. But beware. It’s a dark alley.

One thought on ““Goodnight Mommy” Review-A tough watch to be sure…but you’ll find it hard to turn away.”