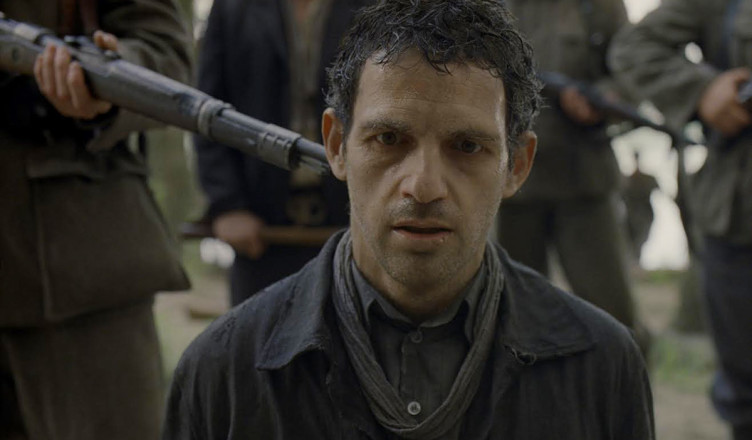 In the horror of 1944 Auschwitz, a prisoner forced to burn the corpses of his own people finds moral survival upon trying to salvage from the flames the body of a boy he takes for his son.

László Nemes’ debut, Son of Saul, is a Holocaust concentration camp drama starring Saul (Géza Röhrig), a prisoner and Sonderkommando. A “Sonderkommando” is a prisoner who cleans the gas chambers of “pieces.” Saul discovers the body of a small boy and claims him as his son, beginning a saga of wheeling and dealing to give the boy a proper burial. Saul is in desperate search of a rabbi to say the correct prayer. His zombie-like determination in finding one is a byproduct of having completely tuned out the horrors surrounding him. Son of Saul is like Dante’s Divine Comedy and Mike Judge’s Office Space crammed together. There’s a “business as usual” operational flow to Nemes’ Holocaust film, though nothing is funny about mass executions at midnight, mass executions in the morning, or genocide at any time. Saul is more interesting to deconstruct than to view as a whole. We travel with Saul in tight close ups and tracking shots. Much of what happens around Saul is purposefully blurry. It’s a nightmare in shallow focus. With a little squinting we’re able to make out the smudges to be naked bodies slogging by, or stacked in lifeless piles. Saul travels the labyrinthine operations of the concentration camps, where prisoners work every kind of grunt job, and game the system by any means. The coalmines are a hellish landscape offering the infinite torture of shoveling. Sounds are as essential as what we see, since what we can see is caught in glimpses around Saul’s screen hogging presence. The rich camerawork is from the hands of cinematographer Mátyás Erdély, who worked on Josh Mond’s James White (also from this year), and who clearly likes putting his camera right up in there. Erdély’s style puts front and center the actor, but is inventive enough to be more substantive than just a close-up. What is out of frame is the stuff of rubbernecking—we know the horrors of the Holocaust, but why else are we watching? We want to see the horrors, not just apologize for them, and Son of Saul makes us keenly aware of this. Inside the pockets of “abandoned” clothing are shiny things to trade with the guards for favors. Some prisoners hide sheet music. Others write their memoirs in secrecy. The camps are like anthills, the necessity of survival driving a furious workforce alive with workplace politics—even prisoners in death camps form a hierarchy. It’s interesting to think of the camps as functioning at all. But Saul’s episodes aren’t as epic, or as connected to one another or his overall mission. These just seem to happen, one by one, and so when we witness his involvement with a small resistance group within the camp, not much about it is made to feel significant, even if it is sounds like it should be. “You fail the living for the dead,” scolds one of Saul’s fellow rebels, and I wanted to say, “one more time with feeling!” The subplots don’t overshadow the objective of life in Auschwitz, of getting history right. But the film itself is thinner than is necessary. The resistance group subplot brought to mind Gillo Pontecorvo’s early sixties concentration camp drama Kapo, which, too, features a rebel group trying to escape a camp, and is also just one plotline among many. Kapo had a lot going for it, but felt disjointed, and really was only worth the chaotic escape scene at its end. I’m not sure what one scene is worth it in Saul, though one scene does not define a film.