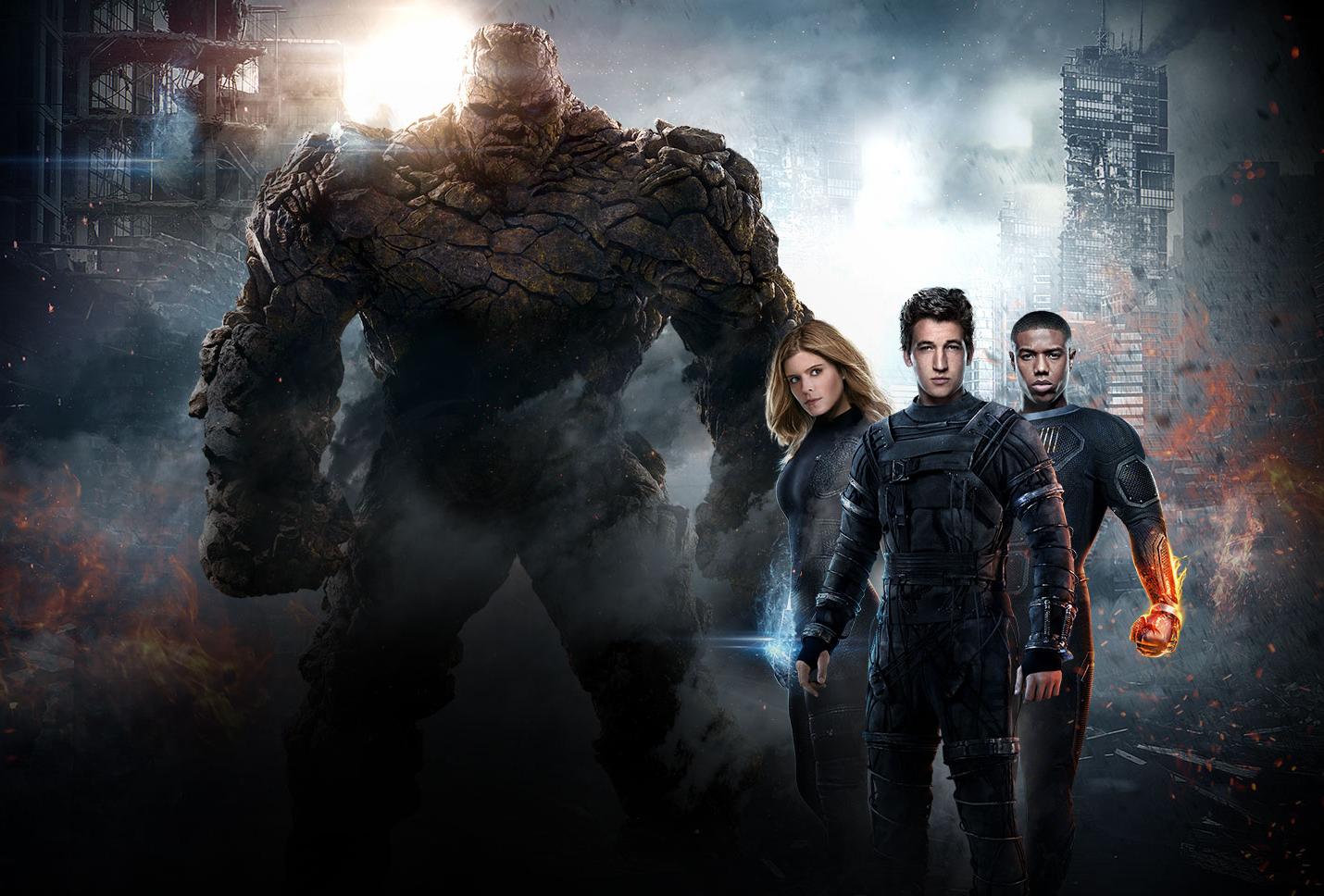 The much anticipated reboot of the Fantastic Four has arrived, and it’s mediocre at best. FOX can do no harm with the X-Men franchise, while it keeps faltering with the Fantastic Four movies. There is no denying it’s significantly better than the previous two disasters that starred the likes of Chris Evans and Jessica Alba, this reincarnation does nothing to go head to head with it’s Marvel friends. Luckily for Marvel, this is a FOX movie. This time around Tim Day luckily didn’t see the light of day in the directors chair, instead the man in charge was Chronicle’s Josh Trank.

The new Fantastic Four starts out with the origin story. Smart play, and an upgrade from the previous version which didn’t establish any sort of origin story. I’ll try not to compare it to the previous versions, but it’s hard not to, as it’s the only parallel you can draw upon from. Young Reed Richards (Owen Judge) is a child genius who’s only interest is to build a machine that can teleport objects. He befriends a kid named Ben Grimm (Evan Hannemann) and they succeed in making an object teleport.

Forward years later, teenage Richards, now played by Miles Teller is recruited by Dr. Franklin Storm to attend the prestigious Baxter Institute, which is a school for brilliant scientists and visionaries. Richards is tasked to continue working on the teleportation project, however, he’s joined up with a few new teammates. Sue Storm (Kata Mara) who is the adopted daughter of Franklin Storm, and bad boy Baxter reject Victor Von Doom (Toby Kebbell), rounding out the group is Franklin’s son Johnny (Michael B. Jordan). The group creates an ultimate teleportation machine that sends them to a place affably called “Planet Zero” (the name is fitting as there is zero going on in that planet). When they arrive on this mysterious planet things go horribly wrong and they are all affected by a explosion of some sort of chemical radiation that gives each of them superpowers, in turn making them into the Fantastic characters we were hoping them to be.

While Trank doesn’t destroy the movie, he certainly doesn’t lead it to greatness. There was a whole lot of original concepts in this movie that goes against the original comic portrayal of the Fantastic Four. For instance, in the comics Johnny Storm is real life brother and sister with Sue, this movie made them siblings by the way of adoption. That leads to another concept of having Sue be adopted and hailing from Kosovo? Huh? Granted these storyline changes were prompted due to the casting of an African American actor to play Jonny Storm, a character that’s been always portrayed as a Caucasian. I found this to be an interesting character change for this movie, one that actually fit well with the portrayal of the other Fantastic Four character. Victor Von Doom is portrayed in the film as part of the original four, not Grimm, who is nowhere to be found and isn’t part of the Baxter institute or the team.

Majority of the blame for what goes wrong will be laid on Trank, and rightfully so, the talented cast of actors doesn’t necessarily come through either. Miles Teller, who has been gaining rave reviews for his last few films is okay as Reed Richards/Mr. Fantastic, but definitely not memorable. He didn’t own the role like he had the potential to. Ben Grimm/The Thing, played by Jamie Bell is largely forgettable, unless you count the times he screams out for help. A man made of rock is asking for help? He’s supposed to be the most powerful character. Sue Storm/Invisible Woman is played by Kate Mara, though it could have been easily played by Rooney with her dull and lifeless approach. At 32 she doesn’t quite strike you as a teenager or college kid, having her portray that was like the actors from the cast of Beverly Hills 90210 portraying they are high schoolers, not legitimate at all. The Invisible woman was truly invisible in this movie. Michael B. Jordan gave a subpar performance as Johnny Storm, mainly due to the writing of his character. Instead of being a cocky, comedic, renegade, he plays a peacemaker, that acts more like the voice of reason instead of an instigator. That juicy rebel role went to Victor Von Doom, played by Toby Kebbell, who not only fits his character the best, but stands out the most out of the entire cast. He’s the only character that displays some persona. If any one actor gains something out this movie, it will be Kebbell.

The special effects weren’t all that impressive, but it wasn’t overly forced with wild CGI either. The best thing about the movie and likewise it’s biggest downfall is the establishing story. The set-up origins story takes up most of the first hour of the movie. That wouldn’t be an issue if it was a standard Marvel movie which routinely hits 2 hours, this one barely crosses 90 minutes.

The origin story is ambitious, but it has way too many holes in it. The events that are established in the lead in don’t justify the events that transpire. Some logical questions that come to mind that struck me were…Why was Ben Grimm part of the first teleport mission? He wasn’t even part of the group that build the actual machine, nor was he established as a key contributor to the original model of it. Why was Grimm forced upon the audience and brought into the big picture when he was hiding in the shadows for the first part of the film? Why was Victor/Dr. Doom filled with such hatred and killed everyone in sight *spoiler alert* including Dr. Storm, the man who trusted him the most? What beef did he have against the Fantastic Four, considering they tried to save him from dying? Some of the logical, yet major questions that weren’t touched on in the movie.

It was plainly evident that the Reed Richards and Victor Von Doom story was ripped-off from the Professor X and Magneto story arc in X-Men, there are numerous parallels. Doom turns rogue against his only friends. Richards shows continuous remorse for Victor ala Xavier for Magneto. Even Dr. Doom’s powers were a replica of Magneto, the crushing of the insides with a glare and clenching of the fist, instead of metal doing the crushing like with Magneto, Doom has the powers of crushing the insides of the body. Too similar. They did do a good job of making Doom look imposing and scary though.

The most frustrating part was the ending. Another *spoiler alert* was the incredibly rushed ending and final fight. I wasn’t even sure what Dr. Doom was attempting to accomplish (ok take over and rule the world) as it felt really forced. All the action takes place on Planet Zero, so apparently they had more action going on than Earth did, which had zero fights. The bubble that the Invisible Woman was transporting everyone through looked like bath bubble that wouldn’t pop. The disposal of Doom was weak and unimaginative.

Overall, Fantastic Four isn’t a horrible movie, the first incarnation of it was, it’s just a mediocre and underwhelming one. It pales in comparison to any of the Marvel movies released in the past few years. For an action comic book movie, it lacks just that–action. When you take chances at reinventing the wheel you either hit or miss, Trank missed. The origin story is fairly neat, but the payoff just wasn’t there and the extended buildup forced an abrupt and awkward ending. The cast doesn’t gel as you would expect them to. This is a film that had fairly high expectations and Fox has a potential bust on their hands. There is still hope to keep this new version of the franchise afloat, but not with Trank at the helm. Maybe the Fantastic Four are best served as just a sidekick in the X-Men universe? Less pressure to disappoint, and these Fantastic Four movies haven’t been hits by any means. I did fall asleep for about 10 minutes during this screening, hey I had a headache. I won’t blame my head pain on the movie, but it certainly didn’t cure me of it. Out for 10 minutes and didn’t miss a thing, maybe that says something about the movie after all.

Additional Thoughts: As negative as my review might sound, I did enjoy certain parts of the movie. The origin story was good. I appreciated the effort to move the details and story arcs around. Toby Kebbell was really fun to watch and nailed the part. Most importantly the film wasn’t a trainwreck (shout out Amy Schumer). I’ll be a bit generous with my grad of it. It was a definitive improvement over the past ones, and easily the best Fantastic Four movie to date, but is that saying much really?