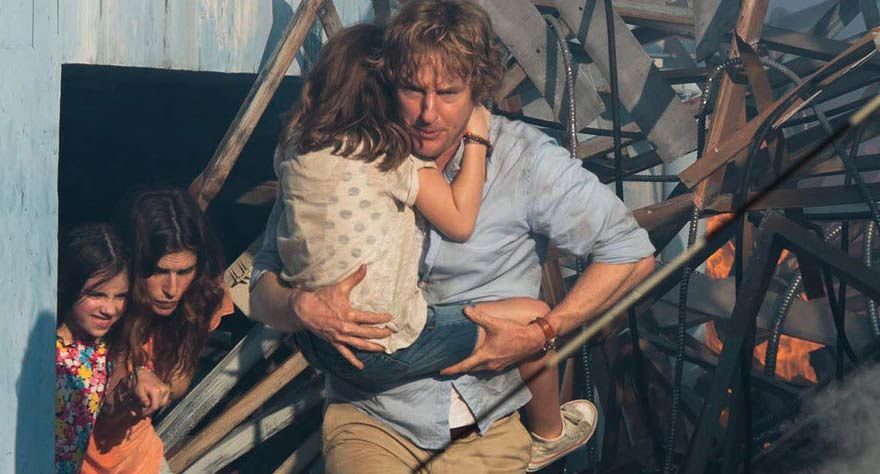 Synopsis: In their new overseas home, an American family soon finds themselves caught in the middle of a coup, and they frantically look for a safe escape in an environment where foreigners are being immediately executed. (Imdb)

It took till the end of August for the scariest movie of the year to arrive. No Escape (available now on Blu-ray & DVD) is not a ghost story, monster flick, or serial killer horror, it’s a well crafted thriller from the Dowdle brothers. Owen Wilson plays Jack Dwyer, an engineer who moves his family from Texas to an unnamed (they don’t disclose the name of the country in the movie) Asian country for a new job opportunity. Once Jack, his wife Annie (Lake Bell) and their daughters Beezy and Lucy arrive in Asia, things aren’t going the way they expect them to. The TV doesn’t work, they have no cell reception, basic necessities are taken away from them for no apparent reason. Nothing says welcome to Asia like no phone reception or TV!

It’s quickly established that the Dwyer’s are very much on their own in a foreign land. Jack can’t establish communication with his company, so naturally he starts assuming something isn’t right. There is a neat scene where Jack attempts to find a place that sells any American newspaper, he bounces around this marketplace and can’t find a way to communicate that he wants a newspaper. He finds an old man who manages to provide him with a 3 day old USA Today. It’s scenes like this that director John Erick Dowdle does a fantastic job illustrating the communication barrier and isolation that the Dwyer’s are experiencing in this new foreign land. From the moment Jack gets the newspaper things go haywire. He finds himself in the middle of an uprising between the people and the government (the country’s leader gets assassinated at the start of the movie, this is the set-up for the instability that begins to take place in the country). The movie doesn’t let up from that point on. Jack is seen fleeing for his life, running through and away from all sorts of chaos and destruction that’s happening all around him.

Soon after he manages to get away from the herds of people causing the violence, Jack realizes that they are after him and his family when he witnesses an execution of an American. Fortunately for Jack and his family, he does have an ally in Hammond (Pierce Brosnan) an eccentric, odd, yet friendly European white guy (should be noted, considering there appears to be a very few of them left alive in that country) that they met on the airplane coming over. We later find out that there is a whole lot about Hammond that nobody knew about.

The rest of the film, or majority of it consists of Jack and his family attempting all sorts of death defying maneuvers in order to survive from the onslaught of barbarically perceived Asian’s. There is a scene in the movie that will probably be much talked about where Jack tosses his kids across from one building roof to another. It’s fairly unrealistic, yet also gripping. It’s the kind of scene where viewers will be talking about how ridiculous and cool it was in the same sentence.

The cinematography by Leo Hinstin and music by Marco Beltrami should be mentioned. Hinstin does real nice work showcasing this unnamed Asian country, capturing the beauty as well as the devastation that is caused. The night scenes are really nicely lit and have a unique glow to them. Beltrami’s music is spot on, working shamelessly with the events in the story. You feel the moments before they happen because of the musical set-up prior to it. It’s some really nice work.

John Erick Dowdle and his brother Drew just “get it,” when it comes to capturing the sense of desperation and fear. The tension in this film is off the charts. John directed the clever horror film Devil, and he borrows some of that suspense and multiplies it in No Escape. This is a really talented young director who has a great feel for true real-life horror, in this case the horror the Dwyer’s endure.

The most common question I hear regarding this movie is people wondering what is Owen Wilson doing in a non-comedy. Many of the same people might not remember seeing him in Behind Enemy Lines, well this is sort of the Owen Wilson from Behind Enemy Lines, just without a gun. He’s actually perfect for this role. After leaving the movie, I couldn’t have thought of anyone better suited for the role of Jack than Wilson. He might be comedic gold, but the guy has some real acting chops, this is a great role for him to demonstrate his more serious, tender, and intense side. Wilson really relates as a young father that tries to deal with his own fears, while trying to be “10 steps ahead” (a line he utters frequently in the movie) of the bad guys. Lake Bell is a talented actress, and fits really nicely alongside Wilson. She’s has this real nice toughness about her, along with these motherly instincts that are on full display in the film. The little girls played by Sterling Jerins and Claire Geare who go uncredited on Imdb (not sure why) are terrific. It’s one thing to have kids cry and scream in fear of the terrors happening around them, but to have them play calm and brave was a really nice choice by the Dowdle brothers. Pierce Brosnan is starting to expand his characters on-screen. He played a hitman in Survivor, and now he plays a charmingly weird Hammond in a supporting role that suites him perfectly at this stage of his career. It appears that Brosnan is having fun expanding his horizons, it also makes him a lot more refreshing on-screen. The interesting thing is that while Brosnan is known for being James Bond and playing the tough guy in his films, in No Escape, Wilson seems like the more tougher and clever of the two.

There are some moments that are over the top (throwing the kids off the roof being one), but it comes with the territory of being an action film also. People will wonder why they don’t disclose the name of this country? It should be noted that there is a strong social and political commentary that the film is trying to portray, or bring about as a talking point. The Asian people depicted in the film that are doing all of these vicious killings, aren’t real villains. They have a purpose for their destruction. If you pay close attention to the movie, you will see that there are two sides to the story. The Dowdle’s were cognizant to the fact that they didn’t want to offend any group of people, therefore they didn’t name the country in the movie. There are no hero’s, but mainly victims. Even though Jack appears to be the protector of his family, everyone plays a crucial part in working together to keep each other safe. The concept of family and bonding is evident, as that’s a major focus of the film. The barbaric brutality that’s happening throughout is not what this film is all about. The undertones of the story that the filmmakers are trying to project are the concepts of family and treatment of people in foreign countries that have a strong outside corporate presence taking over their economies.

No Escape is not only one of the most intense and suspenseful thrillers of the year, but also one of the most terrifying and scariest films of the year. I was genuinely more terrified watching this, than I was any horror movie in the past year. To get someone to feel the terrors that the family goes through in the film speaks volumes of the directors take on how to depict true horror, that being real feelings of desperation, loss of hope, and the feeling of being trapped. While monsters, zombies, and ghosts may or may not give you the occasional goosebumps, No Escape gives your entire body chills. This film is the exact definition of a thriller. All I had to do is look to either side of me to see people squint, squirm, and cringe, to me that’s a sign of a movie having impact on you. This movie left me exhausted at the end. The constant action and intense tension might leave you gasping for air. Credit to the directors for managing to keep the intensity and intrigue throughout the movie without letting up, while also managing to keep it entertaining and suspenseful.

There is no question that No Escape does have a fair share of brutality, but it’s actually necessary to make it believable. Even though the filmmakers probably didn’t want you to feel that way about traveling abroad, after seeing this movie you will most definitely think twice about leaving the country to travel to a foreign land. I’m glad I didn’t see this movie before traveling to Europe a couple months ago (go ahead call me a chump, you’ll see what I mean). You hear about movies being quoted as keeping you at the edge of your seat, well, No Escape actually accomplishes that feat.

Additional Thoughts: It’s rare to have a gripping and tension filled movie engross you like No Escape did for me. It’s also rare that we got two really fantastic thrillers in the same month in The Gift and No Escape. Like I touched on before, this movie is emotionally exhausting, but in a good movie experience kinda way. I was really impressed with the constant action and the consistency of the suspense for majority of the movie. It’s one of those films you don’t want to take your eyes off from, or else you might miss something thrilling. It’s like a bad nightmare you hope not ever living through, instead just having the chance to watch it.

No Escaping The Terror