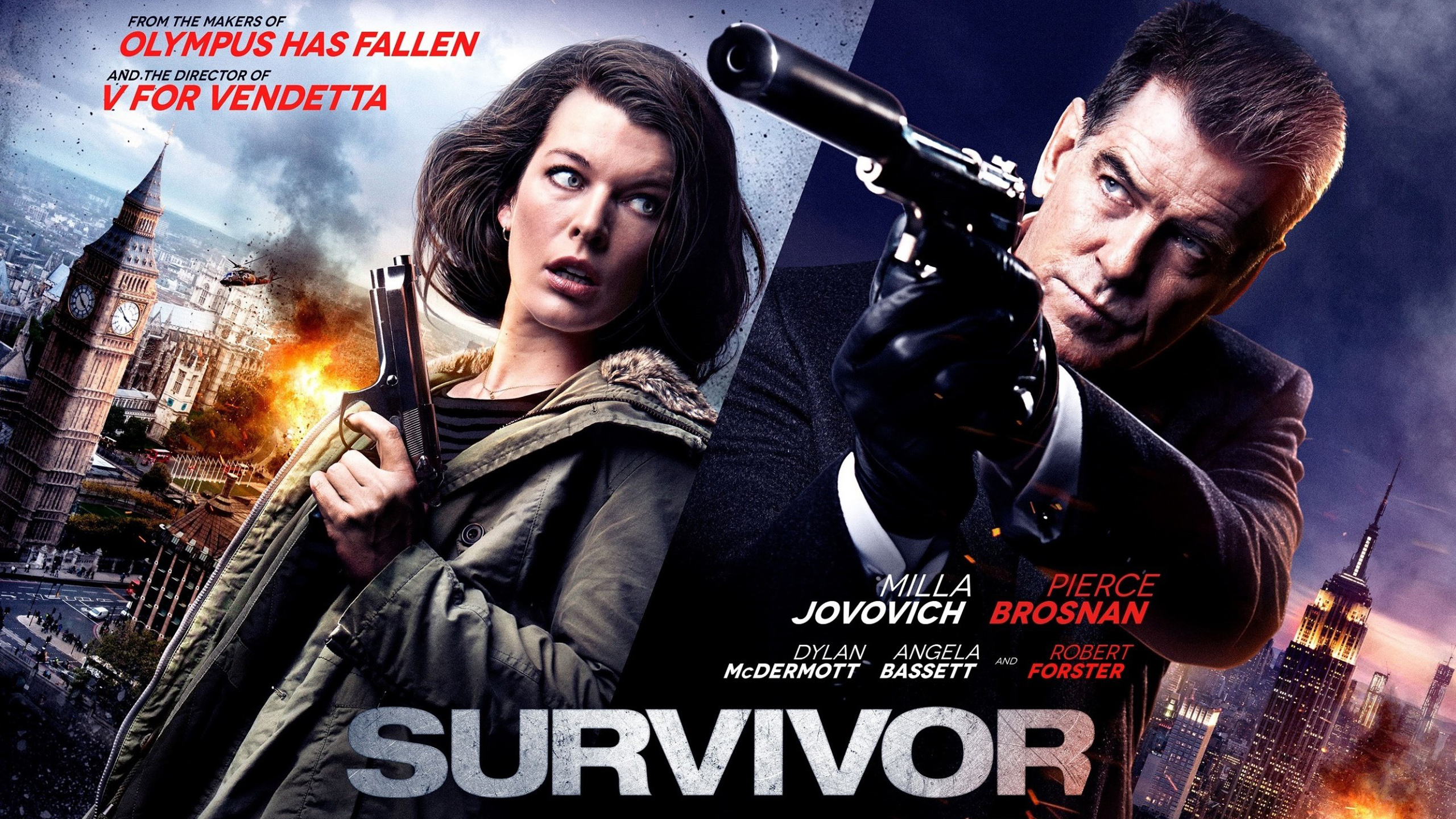 Synopsis:A Foreign Service Officer in London tries to prevent a terrorist attack set to hit New York, but is forced to go on the run when she is framed for crimes she did not commit. (Imdb)

In a summer season that usually produces a bundle of of action crime thrillers, Survivor stands on it’s own ground. Director James McTeigue (V for Vandetta, The Raven) delivers a smart and meticulous action thriller in Survivor. While the title of the movie does make you ponder why it’s the actual title of the movie, the script and story make you quickly forget that the cliche title isn’t the centerpiece of the movie.

Milla Jovovich stars as Kate Abbott, a much lesser version of Alice, but as impactful as her Resident Evil character. Abbott is a spy/agent that is tasked with stopping terrorist action against the U.S., while working for the U.S. embassy in London. She’s basically stopping crime from abroad. Abbott, who seems to have an eye of a hawk for spotting questionable subjects, fixates on a curious foreign traveler. While the embassy’s other workers don’t seem to have an issue with this particular traveler, Kate does. She is spot-on.

Soon after, Abbott becomes tangled in a web of corruption, and fights for her “survival,” ok so maybe that’s where the inspiration for the movie title comes from? Abbott, is quite unlucky, as she tries to prove her innocence while also being framed in a murder of a corrupt official. Additionally, she’s fleeing from her closest allies, as well the prolific hitman Nash (Pierce Brosnan) that is always on her trail.

Abbott is a one woman show. Abbott is crafty, intelligent, with skill set of a Jason Bourne. The most relatable thing about her is how normal she appears to be. She’s skilled, yet appears to be not all-knowing and indestructible, there is a sense of humanity to a character that usually is portrayed as a superhero.

There is a scene in the movie where Jovovich’s character is on the plane messing with her laptop attempting to hack into some valuable information, a flight attendant berates her to shut off the computer, eventually she does. It’s the simple scenes like that that show her humanity.

Brosnan plays the calculated, cold-blooded assassin Nash. It’s a role that’s the opposite of what everyone is accustomed to seeing Brosnan play. It’s somewhat reminiscent to the role he played in The November Man. He’s doesn’t play a bullet dodging, arial acrobat that James Bond might be, instead his best skill is shooting a gun. Definitely more suited role for a man in his age. It’s the sort of role Brosnan should embrace going forward.

Cinematographer Danny Ruhlmann and McTeigue do a really nice showcasing London. They take you to the outskirts of the city, as well as core portions of London. The visuals are simple, but fitting to the tone of the film, which is sort of gritty, and less flashy as many films of this genre are.

When you put it all together, Survivor is a solid movie. It has it’s drawbacks for sure. The plot is a bit outlandish, and so is the ending scene, but it’s what you expect with this sort of genre. It’s definitely a slower paced film, but it works. Milla Jovovich is the sole heroine, and it’s refreshing to have a strong female character that can save the world by using her brains. She does throw a few punches and kicks though. It’s the sort of role that showcases female characters can be used for more than just being sidekicks that work out of the office. If you are looking for a non-stop action thriller full of explosions, CGI, and fighting, you might be better off seeing Furious 7. On the other hand, if you like a fun, slower paced spy action thriller with a strong female lead, Survivor is worth the watch.