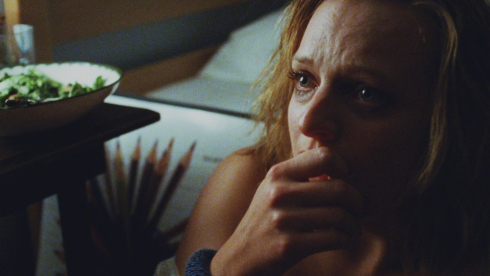 Synopsis: Catherine (Elisabeth Moss) has entered a particularly dark period in her life: her father, a famous artist whose affairs she managed, has recently died, and on the heels of his death she’s dumped by her boyfriend James (Kentucker Audley). Looking to recuperate, Catherine heads out to her best friend Virginia’s (Katherine Waterston) lake house for some much needed relaxation. However, once Catherine arrives relaxation proves impossible to find, as she is overcome with memories of time spent at the same house with James the year before. As Catherine reaches out to Virginia with attempts at connection, Virginia begins spending increasing amounts of time with a local love interest, Rich (Patrick Fugit), and fissures in the relationship between the two women begin to appear, sending Catherine into a downward spiral of delusion and madness.

Queen of Earth doesn’t quite come together like Alex Ross Perry’s two previous films, Listen Up Philip or The Color Wheel, but it is just as confidently (and in many spots, as skillfully) made—a damning quality. It suffers from thematic tunnel vision and a poetic style that borders on poeticism. It doesn’t grab us by the throat and make us stare deep into it like a psychological drama should–like Altman’s 3 Women or Bergman’s [pick one…any one]. For everything Queen of Earth has going for it (mood, dialogue, and pacing), its showcase items—Elisabeth Moss and her take on madness, in-sequence shooting, close-ups, and a couple of forced scenes, one in particular where Moss and co-star Katherine Waterston stare off to nowhere sharing stories of boys and heartbreak over a sad, directive score—don’t come together with fun and fluidity. And yes, psychological dramas can be loads fun (you just have to stretch your definition of the word).

Elisabeth Moss gives a great performance in what is essentially a spotlight role. Shot in sequence, Moss is able to portray Catherine’s bubbling psychological breakdown through something closer to real life experience. But the performance takes centerstage hostage like Robert De Niro does in Raging Bull (a movie I watched not long ago, which brought up in me the same almost caustic admiration I have for Moss in Queen of Earth). There is a certain “you’re gonna eat it, and you’re gonna like it” side to these kinds of overwhelming characters and the billowing performances that bring them to life.

Moss fills the screen from first light; something like Constance Towers in The Naked Kiss. But her twitchy spitfire act doesn’t scream from the gut of instability like Kirsten Dunst’s genuinely scary performance in Melancholia, or Jennifer Lawrence’s frustrated and fed-up act in Silver Linings Playbook. Moss, infinitely talented, isn’t as perfect a fit in Queen of Earth as she’s been in her long run as Peggy Olsen on the now defunct Mad Men, in her role in Listen Up Philip, or even, dare I say, in her part of the one-note dark comedy The One I Love. She seemed more natural in those roles–exasperated, but very alive. Here you only have to see the clunky party scene–Catherine’s big emotional breakdown, and Moss’ time to shine, which shows various hands grabbing at her like something Bunuel would’ve done better with–to begin the eye rolling process.

Katherine Waterston—playing Catherine’s best-friend Virginia—is every bit the cold, calculated and reflexively caring performer she needs to be. But nothing really comes of their battle-tested best-friendship, or of Catherine’s struggles with her father’s untimely passing, not to mention the emotional distress Virginia struggled with the summer before (as the smartly used flashbacks hint). The details pile up with purpose–Catherine is on the brink of insanity, and so something must’ve driven her there–but are harped on for the viciousness of her fights with Virginia. This takes some of the gut-checking mystery out of the film’s psychology. Films are wonderful devices for the imagination—Furiosa’s missing arm in the new Mad Max tells as big or little a tale as you wish it to, without having much function otherwise to the plot. But Queen of Earth leaks many details, only to use them for a narrow narrative duty (a narrative duty, mind you, that barely passes #3 on the Bechdel test).

The “dumbest” part of Hitchcock’s Psycho is when a doctor describes the nature of Norman Bates’ condition in a five minute bit at the end of the film. It’s still fun, and funny, too, but the pop-psychology is intentionally glib—tying the film in a neat package for those who need it. Queen of Earth is like a film length version of this scene. The flashbacks, the miseries, the mood, the pain, the fighting, it is all in harmony—the mark of a very good filmmaker—but the endnote doesn’t leave you dead and cold and begging for more.