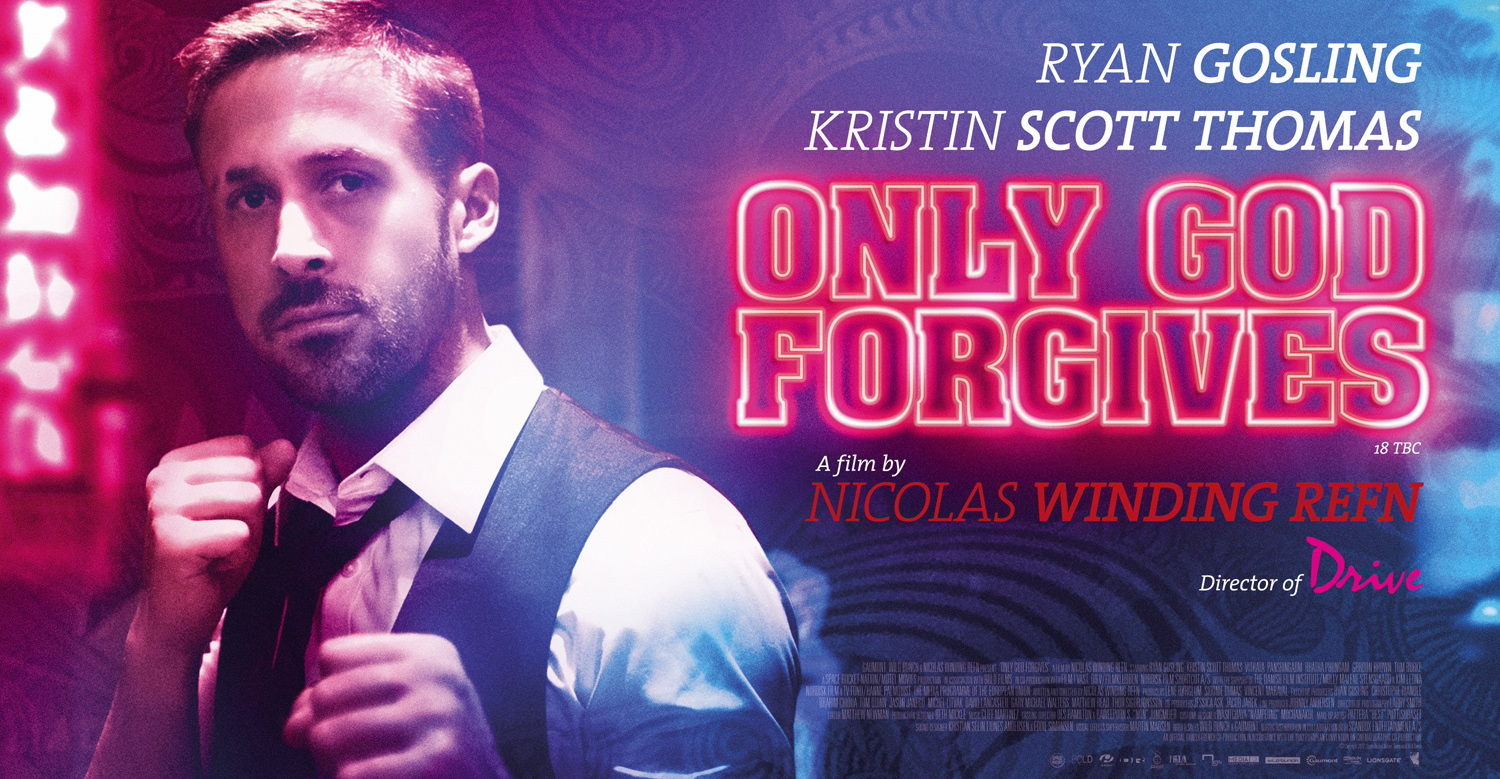 Only God Forgives: do you reckon he’ll forgive Refn for this confusing number?

Julian, an American fugitive from justice, runs a boxing club in Bangkok as a front for his drug business. His mother, the head of a vast criminal organization, arrives from the US to collect the body of her favorite son, Billy. Julian’s brother has just been killed after having savagely murdered a young prostitute. Crazy with rage and thirsty for vengeance she demands the heads of the murderers from Julian. But first, Julian must confront Chang, a mysterious retired policeman – and figurehead of a divine justice – who has resolved to scourge the corrupt underworld of brothels and fight clubs.

When three people sitting in the row in front of you at the cinema get up and walk out after just 20 minutes having paid £9/$14 for the film, you know there’s something wrong. Now I’m one of these people who, no matter how bad a film is, won’t give up on it until it’s finished. If I wasn’t this person, there are times when I too would have considered walking out on Only God Forgives. This is not to say the film was horrendous, it was just a completely warped mindf*** of an experience, (and not necessarily in an exciting way) that would probably be a psychiatrists dream.

Nicholas Winding Refn, director of Drive, has taken an insanely wacky edge on Only God Forgives in terms of the storyline, visuals, dreamlike states, and a series of just plain odd unexplainable moments. At times I thought Drive was ‘out there.’ No way. Not in comparison to this little neon puzzle. In my opinion Drive was pretty great – everything from the silence, the suspense, the music, the beautiful use of cinematography, the aesthetic alignment on screen, and OF COURSE The Gos. Obviously all these things excited me for Refn’s next film. I can’t help feeling a little disappointed with Only God Forgives as a whole, mostly on the basis of sheer confusion and actual brain pain – my face molded into a confused frown for the rest of the evening. It took me a long, hard think to work out whether I thought the film was THAT bad or THAT good. It’s honestly a thin line – which makes the complete polar opposite reviews of top critics seem more accurate. Now, if there is one thing I cannot fault about the film, it’s the cinematography and photography – the visuals were, at most points of the film, totally mesmerizing. At times, I sat there thinking that if the film were a real story, and Refn was a photojournalist, a selection of stills from the film would make the most incredible documentary photography project. I was actually snapping away in my head. The filming had a real rawness about it – everything from the lighting, to the locations, the carefully crafted arrangement on screen and character movement. The only thing about the filming I would fault were the overly long shots on peoples faces. Yawn. Refn used stunning neon beams in a very classy, non-tacky way, which can be hard with fluro, and gorgeous hues of an endless variety of colour to symbolize the safety or danger of a scene, the warmth or coldness of an atmosphere. The storyline was mediocre to poor, and didn’t really translate well onto screen. It was hazy to say the least and at times felt inconsistent and a bit dull. If you read the synopsis and then watch the film, it doesn’t properly add up, and I think it has to do with the film being so experimental and arty that at times I got so lost in the confusion of everything, mixed with the trippy spectacular visuals, that I ended up not concentrating on the storyline, but instead trying to figure out what the hell was going on.

Refn has been criticized for the violence in Only God Forgives, and although at times it was a little gory and hard to watch without wincing and curling up, it was pretty artistic and tasteful. There was a particular scene I like to call ‘Torture by Chopsticks,’ which is as bad as it sounds. It. Was. Gross. The macho dude to my left was squirming and definitely not enjoying himself. So, I’m not entirely sure what the setting of the scene was, it seemed like two guys in arm chairs watching a private viewing of beauty pageant contestant singing in front of other beauty pageants and perfect human china dolls in a very dated and frilly room. Odd. But the contrast of a delicate setting disturbed by the disturbing disturbance that followed on behalf of Chang, played by Vithaya Pansringarm, worked well. The acting – what acting? Yeah, it really seemed that minimal at times, is hard to comment on in detail, as there wasn’t really much of it. Ryan Gosling, who played Julian, a boxing club owner and drug lord, genuinely had about 10 lines throughout the film. AGAIN. Seriously – why won’t directors let him speak? I found this pretty frustrating, as although he is a fine piece of ass who is great to look at, and has the pensive, emotionless facial expressions down to a tee, it would have been nice to hear a bit more dialogue from him. This would have taken some of the ambiguity away from his character without losing the mystery. The non-talk doesn’t stop there; I think the other characters had about 200 lines between them. I personally enjoy a bit more discourse in a film as it really opens up a story, giving you deeper involvement rather than solely looking at a piece of artwork. This said, Kristen Scott Thomas gave a great performance – she strutted onto the screen as a Donatella Versace doppelganger, with the sick twisted mind and incest suggestions of Gillian Darmody (Boardwalk Empire) and the attitude of Naomi Campbell. She reeked of manipulation, insanity, rudeness and power – and played each of these convincingly. I will praise Refn on precision and arrangement, the colours, patterns, and movements – everything on screen, be it bloodshed, dingy corners, creepy Thai karaoke, neon lights, character interaction, were all really well formed and neat. At times of murder and corruption the film would silence all background noise and feature only delicate music juxtaposing the gritty scene, which worked pretty nicely. Unfortunately the gripping visuals and arty formation weren’t really enough to make up for the story and direction. At too many times the abstract elements seemed unnatural, and the confusion of what was real and what was a fantasy were too common. I would not rush to see this film again, but would recommend it to anyone who likes to be confused, enjoys a challenge, or is content to sit and watch Ryan Gosling.

Space Sweepers Review: All set to clean up the Earth’s orbit

Alice Fades Away: Creepy Tone for a Twisted Tale

DoLittle: A film which should have done less

3 thoughts on “Review: Only God Forgives”