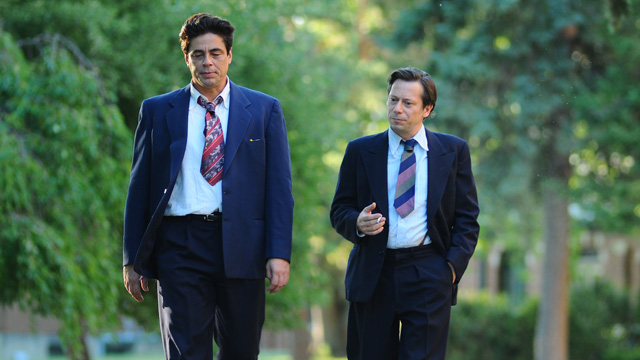 I am a Benicio fan. Man can act, man is hot. And the reviews say that his performance was good in what has been regarded not such a good film. Jimmy P: Psychotherapy of a Plains Indian was nominated for the Palme d’Or at the 2013 Cannes Film Festival, and although I haven’t seen Jimmy P, The winner of the award; Blue is the Warmest Color was fantastic and a hard contender for sure. Anyway, Jimmy P looks to be an interesting exploration of a relationship between a damaged Native American who has fought for his ‘country’ in WW2, and a French psychotherapist fluent in Native studies, who tries to find a correlation between Jimmy’s heritage, cultural repression and discrimination, and his mental damage following the war. Check out the trailer below:

At the end of World War II, Jimmy Picard, a Native American Blackfoot who fought in France, is admitted to Topeka Military Hospital in Kansas – an institution specializing in mental illness. Jimmy suffers from numerous symptoms: dizzy spells, temporary blindness, hearing loss… In the absence of any physiological causes, he is diagnosed as schizophrenic. Nevertheless, the hospital management decides to seek the opinion of Georges Devereux, a French anthropologist, psychoanalyst and specialist in Native American culture.