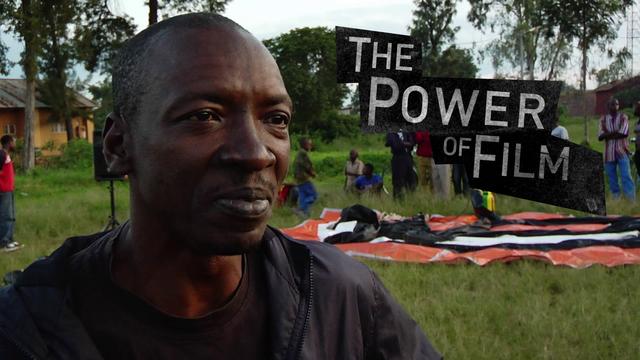 Synopsis: Set amongst the hills of Rwanda, FINDING HILLYWOOD chronicles one man’s road to forgiveness, his effort to heal his country, and the realization that we all must one day face our past. A unique and endearing phenomenon film about the very beginning of Rwanda’s film industry and the pioneers who bring local films to rural communities, on a giant inflatable movie screen. For most Rwandan’s this is the first time they have seen a film, let alone one in their local language, “Kinyarwanda.” Thousands of people show up to watch films in stadiums next to mass graves, and locations where horrible crimes took place during the genocide. FINDING HILLYWOOD is a real life example of the power of film to heal a man and a nation.

We have Hollywood, Bollywood, and Nollywood, but Hillywood seems to be the most exciting new wood in town. Finding Hillywood has to be one of the most inspirational heartwarming documentaries I have seen in a long time. Not only does it follow the touching story of Filmmaker and Hillywood coordinator Ayuub Kasasa Mago, but also it introduces audiences to the Rwanda Film Festival (RFF), the development behind it, and the positive growing impact that film is having on Rwandan society.

Opening with breathtaking scenery, we are shown what appears to be the most tranquil lake. However, it bears more depth and darkness than most of us can ever imagine. We meet Ayuub looking over this lake – he is a friendly, pretty awesome guy, who is a fantastic example of someone having gone through hell and coming out the other side as an exceptional human. He explains the horrific story of his mother’s death in the 1994 Rwandan Genocide. She attempted to drown herself in this lake as an escape, but was tricked into being helped, then hacked to death with hundreds of others inside a church. Ayuub’s story is representative of millions of other similar experiences that resulted in unimaginable loss and suffering. “The power of film to heal.”

After a downward spiral of depression and substance abuse, Ayuub turned his life around in a very positive way. He was lucky to stumble upon some work on The Last King of Scotland as a location assistant, on which he studied hard, desperate to learn about what would be his new passion; film. He discovered that by channeling his creative energy and past heartbreaking experiences into filmmaking, it would reach and teach other Rwandans. It is through film that the echoes of these experiences are being addressed, in order for Rwandans to try and move on together as a nation through the power of visual stories made by local people who have in some way suffered.

It is completely refreshing to see a group of people so passionate about film and story telling, who own no immense skill or great facilities, but who are determined to make films the best possible way that they can, and then share them with their country. Finding Hillywood shows the obstacles that the RFF Team battle through and overcome in order to spread positive energy and teaching through film to as many Rwandans as possible. For one week in July, the festival crew travel around the country – through winding hills and beyond in order to reach rural villages, to share with as many as people possible the art of film on an inflatable screen. A lot of these children and adults are seeing a film for the first time in their lives. Not only are they being exposed to the creative medium, but are also being taught about the Rwandan Genocide and the scars it bears. The filmmakers also address issues such as alcohol use, drug abuse, and domestic violence, which helps young people see that these things are wrong, especially if they have little guidance in life.

“We try along with them (civilians) to understand, to address and to talk about the genocide, through the stories thereby accepting and, you know, knowing that these things happened and the more we understand them, we have a chance of moving on.” – Rodrigues Karekezi, Filmmaker and Actor.

Throughout the documentary, Finding Hillywood features interviews with Rwandan Film Festival team members, actors, and filmmakers. It also weaves in clips of a variety of different films made my Rwandans that feature at the festival for audiences to have a taste of the work shown. Leah Warshawski and Chris Towey have directed this documentary in a very warm and humbling way – with a perfect mixture of interviews, movie clips, stunning shots of the country, and following the RFF team hard at work before and during the festival, as well as shooting the screenings with thousands of attendees. The documentary gives insight into how the Rwandan Film Festival is impacting the lives of many locals – just by seeing their concentration and awe when watching the inflatable movies is so touching. For anyone out there who loves film (pretty much everyone reading this piece, I should hope) I strongly recommend you watching this eye-opening masterpiece that radiates hope, warmth, and determination to teach the masses through film. It is so moving how a group of people can come together to do something that they love, on a really human level, but for an incredible cause too. It’s not about the money, the fame, or the status – it’s about teaching individuals and the masses, and spreading the love of film to people less fortunate.

“Only film can bring it (a story) to the wider audience, to the wider perspective.” – Eric Kabera, Rwanda Cinema Centre Founder.

Director Leah Warshawski was so kind to dedicate some time to answering questions about Finding Hillywood:

TMB: What gave you the inspiration for Finding Hillywood? Why did you want to get involved with Rwandan Film Festival?

LW: “The DP (Chris Towey) a I were in Rwanda in 2007 for another project and it was our first time there. We were amazed by the beauty in the countryside and the passion of our local crew. They told us about “Hillywood” the day we were leaving and the idea of thousands of people watching movies in the countryside for the first time – in their own language – was enough to get us “hooked”… We went back to Seattle and started raising money for the project. 6 years later we have completed the film.”

TMB: What was the reception like from audiences when you screened Finding Hillywood at this year’s festival?

LW: “The reception was great, thankfully! Ayuub had seen the film before but for a few of our main characters it was their first time viewing. There were many happy tears. We actually translated the film into Kinyarwanda so it could play in the countryside and we had a great reception from the young kids who all asked how they could become filmmakers.”

TMB: How much do you think the films are starting to impact Rwandans? Have you had much feedback on this?

LW: “We can see just from screening our film and learning about the film industry that local films about Rwandan topics and issues have a major impact. Unfortunately, due to budget restrictions and loss of sponsorship the “Hillywood” portion of the festival has been reduced to 3 rural locations. We had a frustrating experience this year at the festival and hoping they can manage it better next year and continue to bring films to the rural locations where they can have the biggest impact on the children and communities who attend.”

TMB: I know that you have worked on TV projects such as Lost, and movies such as American Candidate and Along Came Polly, how would you say that Finding Hillywood compared in the way that it made you feel when making the documentary?

LW: “For me, there is no comparison… I believe I have worked on some aspect of the film every day for the last 6 years and I feel a lot of pride and ownership in it and how it is received by Rwandans. We also just launched a website (in partnership with BPeace and the Academy of Motion Pictures) called rwandafilm.org in hopes of helping to create jobs in the Rwandan film economy. That is our ultimate call to action and hope that this will have a lasting impact.”

TMB: How important do you believe film is as a medium when trying to teach people about their country and the immense suffering that has happened?

LW: “I believe it is important for everyone to be able to tell their own story – and film is a great way to achieve this. I do think that Rwandans are ready to move past the genocide and all of the suffering they have endured, and film can also help with this by providing entertainment and a common venue for people to “heal” – art and cinema are incredible tools for healing, and we have seen that with our characters in the film.”