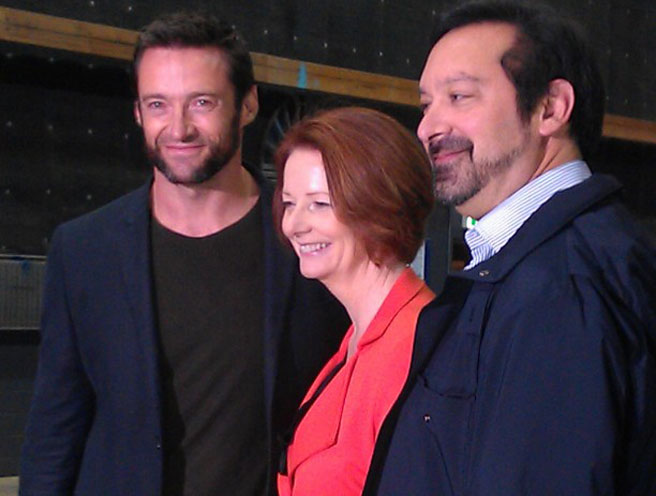 I knew this day was coming but it still seems sorta surreal. The Wolverine is one of those movies that has stirred up a lot of attention over the last couple of years and seeing it progress closer toward the finish line is still surreal. I’m glad that this story will be told and hope that the film manages to exceed expectations. Below are a couple of photos from the set at an “extremely early stage of construction.”

It’s good to see the Wolverine beard firmly in place. Hugh Jackman provided some insight into what playing the role means to him that has stuck with me:

“I was lucky enough to start the character 12 yars ago from a comic that started 50 or 60 years ago, and there was a massive following for the character. He’s really been the backbone of my career and I love Wolverine. At the time of the first movie I really had no choice but to take anything that came along, but I’ve been lucky enough to walk into a character that’s the most interesting and complex of superhero characters, and I’ve always loved playing it.”

– “I’m sure the franchise will live long beyond me. I do them one at a time and see how I go. When I saw the script and when Jim [Magnold] got on board – I feel like a golfer looking for a hole in one – I thought it was the best script and we had the chance to really make a definitive movie”.

– “It’s not easy [getting back in shape after LES MISERABLES]. And by the way, it gets harder every year! That was a particular challenge, because at the start of filming I was 83kgs and had to finish up 97kgs. We did have a family holiday recently, but it felt more like boot camp for me!”

Jackman has been pretty fun and exceeded expectations in the role of Wolverine but he does reveal an interesting fact in that he might be getting too old for the role. I love him as Wolverine but in reality it’s extremely likely that at some point he’ll have to hang up the claws and step away from the character. As far as we know this could very well be his last film as the character . Sure I could be dealing with some residual abandonment issues but the truth of the matter is that someday it’ll happen and as hard as it may be there’s a lot of fun to be had in determining who could next follow in his footsteps in the role.

If you had to choose, who would be your next Wolverine?

2 thoughts on “The Wolverine prepares for production”