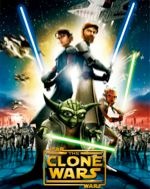 The first Star Wars film to see theatres in a little over 3 years was really just a big publicity stunt to draw attention to the proposed animated series on Cartoon Network. The “Movie” tied together the first 3 episodes with the intention of carrying on as a weekly series. IESB.net reports when the show will air:

I guess when the writer of the article calls it the first weekly show, they forgot completely about the Droids and Ewoks Adventure Hour that aired weekly on Saturday Mornings. I have both in their entirety on DVD.

At least they are not hiding the fact that Star Wars has been manufactured to appeal to preteens, showcasing it on Cartoon Network in the timeslot best viewed by babysitters while their parents (or anyone over 19) is out having a life.

In any normal network, with such overwhelming criticisms about the whiny character of Ahsoka, the voice tracks would be edited to refine the character. But we know Lucas. The only things he likes to change is who shot first and the eternal fate of force ghosts. Star Wars is gospel, and not much will be altered.

On the lighter side, it seems the first episode to air will pick up right after the movie and will be a Yoda/Dooku episode. This implies that the series will not dwell on Ahsoka. Also, we know that at some point Ahsoka has to go since she wasn’t in Revenge of the Sith. With any luck she will “graduate” and get reassigned or just eatten by a Mynock or something.