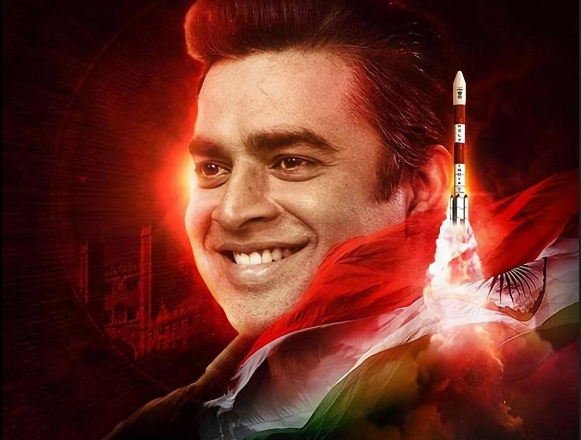 Sometimes, a man wronged is an entire nation wronged! Signifying this, R. Madhavan makes his directorial debut with the Pan-India film “Rocketry: The Nambi Effect” which is a biographical drama on the life and career of India’s greatest aerospace engineer and scientist, Nambi Narayanan. Rocketry portrays the struggles and hardships Nambi Narayanan faced after he was wrongly accused of espionage.

Madhavan stars himself in the titular role of the legendary rocket scientist. Rocketry was released across theaters in India on July 1, 2022. This film also premiered on May 19, 2022, at the Cannes Film Festival held in France.

The story revolves around the life of Padma Bhushan-awardee aerospace engineer of the Indian Space Research Organization (ISRO), Nambi Narayanan. Nambi was a workaholic and dedicated his life to work and work only. For him, his work was of paramount importance; even more important than his family. His aim was to highlight India on the World Satellite Map! Nambi was the inventor of the “Vikas Engine”, a rocket engine that was later used in the launch of the Polar Satellite Launch Vehicle (PSLV).

Nambi, a brilliant young aerospace engineer, was involved in the Thumba Equatorial Rocket Launching Station project where he saved one of his then team members from a major injury. This team member of his was none other than the great Indian missile scientist and former President of India, A.P. J. Abdul Kalam (Gulshan Grover). In the year 1969, Nambi got a chance to pursue an MSE program in chemical rocket propulsion at Princeton University, USA. He successfully completed the program under professor Luigi Crocco (Vincent Riotta) who recommended him for a fellowship at NASA. After working briefly at NASA, he was offered lucrative paychecks and allowances. He rejected everything and returned to India.

One day, all of a sudden, Nambi was in for a shock when he was arrested by the Kerala police. Even his family members were boycotted by society. After all these years of hard work, dedication, and immense contributions to his nation, Nambi had no idea why he was arrested.

To his horror, he was informed by the Kerala police that he was arrested for espionage. He was accused of being a spy! Nambi was brutally tortured, beaten up, and almost got killed by the cops in prison. Years later, the Supreme Court of India pleaded him “not guilty”. However, by that time a lot of damage had been done. His wife became mentally ill, and his family had to bear a lot of hatred and harassment from society.

An Interesting Story And Screenplay

This true story of Nambi Narayanan has been beautifully designed by R. Madhavan, and is highly engrossing. The screenplay of Rocketry is divided into two halves. The first half comprises all technical aspects of the story and showcases Nambi’s miraculous inventions and contributions in the field of rocket science. The real drama unfolds during the second half which showcases Nambi’s hardships and struggles after he was convicted of espionage.

The story and screenplay of Rocketry are impactful enough to evoke emotions in you. You probably won’t be able to bear the sight of a talented aerospace engineer of ISRO getting brutally tortured and beaten up in prison. After watching the hardships he faced and the life struggles of his and his family, you are sure to feel the pain he has been through, and you may possibly even start crying.

The climax of Rocketry is quite emotional as well where you will see Nambi receiving a phone call stating that he has been acquitted by the Supreme Court. He then conveys the news to his family. The emotions and expressions of Nambi as well as his family members at that moment are truly cherishing. I must say that the true story of Rocketry indeed has a strong buildup, and deserves this kind of emotional ending.

R. Madhavan Did The Best Role Ever In His Acting Career

R. Madhavan completely nailed it with his volatile character of Nambi Narayanan in Rocketry. The development of Rocketry started in 2017, and Madhavan has presented himself as an award-winning aerospace engineer and scientist from age 27 to 75. Therefore, at different instances, Madhavan was required to present himself differently to showcase Nambi’s aging process throughout the film. Sometimes, he had to look like the dashing and handsome Nambi during his youth, and in other instances, he presented himself as the middle-aged Nambi. He even presented himself as the 75-year-old Nambi by pursuing a complete makeover with white hair, a white long beard, and massive spectacles during the interview scenes where he narrated the story.

The Dynamic Cameo Appearances: Shah Rukh Khan In The Hindi Version And Suriya In The Tamil Version

Rocketry is a multilingual Pan-India film that has been simultaneously filmed in Hindi, Tamil, and English languages. The Hindi version of Rocketry has the “Emperor of Bollywood” Shah Rukh Khan (as himself) taking the interview of Nambi Narayanan, whereas the Tamil language version has renowned South Indian actor Suriya as Nambi’s interviewer. These cameo appearances made the film’s TRP rise sky high as Shah Rukh Khan and Suriya, being top-class actors, as usual, carried out their respective interviewer roles to their full potential.

The melodramatic dialogues devised by R. Madhavan in Rocketry are simply out of this world. They have a comical essence, yet are impactful enough to leave you wondering. This film has been shot in Hindi, Tamil as well as English. Here I will narrate some Hindi dialogues from this movie, and present their translations in English.

One amazing dialogue which Nambi gave Shah Rukh Khan during his interview is, “Main Yahan Isliye Aaya Hoon, Kyuki Mere Saath Jo Hua Woh Is Desh Main Kisi Aur Ke Saath Nahi Hona Chahiye” meaning, “I have come for this interview because I don’t want anyone else to suffer the same situation like me”. Another one goes, “Sir, Yeh Rocketry Nahi, Puppetry Hain” meaning, “Sir, this is not Rocketry, but Puppetry!” And the best one, “Kisi Kutte Ko Maarna Ho To Afwah Faila Do Ki Woh Paagal Hain. Theek Usi Tarah, Kisi Insaan Ko Barbaad Karna Ho To Yeh Ailaan Kar Do Ki Deshdrohi Hain!” meaning, “To kill a dog, spread the false rumor that it is rabid . Similarly, to destroy the life and career of a man, falsely accuse him of treason!”

At the end, Nambi Narayanan (himself) gave a very thoughtful dialogue. He revealed to Shah Rukh Khan why India is still a developing nation. He said, “Koi Bhi Desh Mahan Nahi Reh Sakta Jab Tak Use Mahan Banane Walo Ki Kadar Nahi Ki Jaati” which means, “No country (signifying India) can remain great until the people who make it great are respected”.

The cinematography of Rocketry by Sirsha Ray is enticing with lifelike visuals of space, aerospace technologies, and rocket launches. I do feel that such amazing visuals add to the excitement of watching this film.

The editing and scene placements in Rocketry were aptly done by Bijith Bala which maintained a steady flow of the movie till the end. This biographical thrilling drama has a sequential flow throughout its entire run duration of 2 hours and 10 minutes which won’t confuse the audience.

Use Of Too Many Technical Jargon

The amazing screenplay of Rocketry has a shortcoming as well. The use of too many technical terms during the first half is enough to confuse the Indian audiences because here in India, many among the audiences may not be able to understand technical jargon as they may have very little idea about aerospace engineering. For instance, the “cryogenic engine” terminology has been used several times during the first half of the screenplay but has not been explained properly. What idea on cryogenics and its context the ordinary Indian, who has never studied science, can possibly have? To such people, the entire rocket science-laden first half may hover above their heads, and appear confusing as well as boring.

It is because of this sole reason that at times this highly engaging biographical drama may appear to be kind of some documentary series to you. The dramatic essence of the film as well as the thrill get lost to quite some extent.

The ending of Rocketry is emotional no doubt, but it doesn’t reveal who had wrongly accused Nambi of espionage. Was it some Indian guy, Indian police, the Indian government or some foreign country, we never get to know that from the movie? This surmise will leave the audience guessing. I think it would have been better if Madhavan had considered revealing the real villain in this movie.

Rocketry marks the directorial debut of R. Madhavan, and I must say that he has proved himself as a versatile film veteran who has the ability to carry out a film’s direction as proficiently as his acting. Madhavan, as the titular character and innovative director of Rocketry, wanted to differ in the script to make this film appear uniquely different as compared to other biographical dramas. He even stated that he would not address this film as a “biopic”. The apt genre of this film according to him was “an incisive investigation into a brilliant mind and India’s ambitious space technology”. Madhavan also stated that he himself was probably the only actor qualified to play the role of Nambi Narayanan owing to his electronics engineering qualification, and Air Force-training background.

The supporting cast of Rocketry includes Simran Bagga as Nambi’s wife Meena, Gulshan Grover, Rajit Kapur, Vincent Riotta, Phyllis Logan, Sriram Parthasarathy and not to forget, Nambi Narayanan himself! They all presented themselves in their respective characters to their full potential and brilliantly carried themselves throughout their respective roles. I must say that the astounding performances given by the supporting cast had a huge influence in ensuring Rocketry’s success as a biographical drama.

Rocketry was shot extensively throughout locations in India, Georgia, Russia, France, and Serbia. I especially found the foreign locations and sets to be extremely appealing. Rocketry has two tracks, both of which have been composed by American music composers Nate Cornell, and Billy Dawson. The songs are good but not emotionally impactful or melodious enough to make you keep humming them all day.

Overall, Rocketry is a Pan-India cinematic masterpiece that is worth the watch. If you would like to experience the life struggles and achievements of Nambi Narayanan, don’t forget to check out “Rocketry: The Nambi Effect” at your nearest theaters. 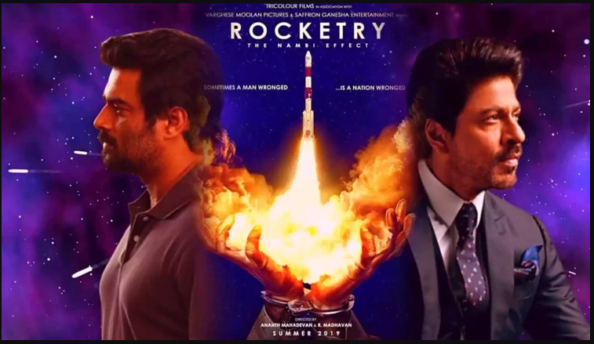