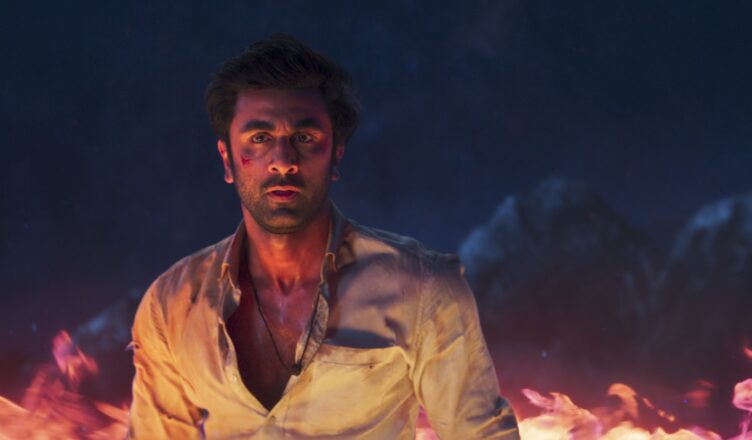 “It is within you that the divine lives” were the words of late American author Joseph Campbell. Writer and director Ayan Mukerji delivers a fantasy action-adventure drama to the Bollywood big screens titled “Brahmastra”.  Its first part is titled “Shiva” which stars Ranbir Kapoor in the titular role. The supporting cast includes Ranbir’s wife Alia Bhatt as the lead actress, Mouni Roy who plays the lead villain, and three Indian cinema biggies, Amitabh Bachchan, Shah Rukh Khan, and Nagarjuna. Co-produced by Karan Johar, Ayan Mukerji, and Ranbir Kapoor himself, Brahmastra opens worldwide on September 9, 2022.

The Legend Of The Brahmastra!

A DJ named Shiva (Ranbir Kapoor), who leads a happy-go-lucky life, is suddenly made aware of his supernatural connection with fire. In fact, Shiva possesses the power of the “Agniastra” which is known as the divine fire weapon. Shiva is also made aware of his ability to awaken the Brahmastra.

It’s the battle of good versus evil. Who will succeed in this quest for obtaining the Bhramastra? Will Shiva be able to save the Brahmastra from falling in the hands of Junoon? Watch till the end to find out! 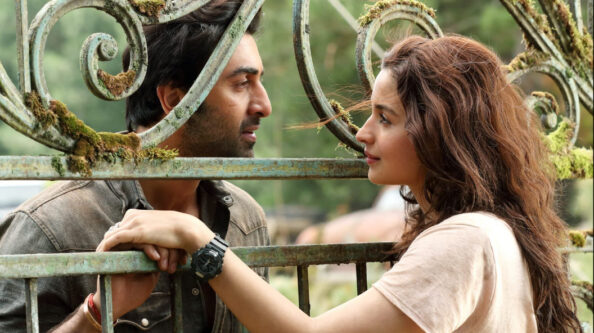 Director Ayan Mukerji has written the screenplay of Brahmastra. This is a completely new and unique story. I bet you wouldn’t have come across a fantasy-adventure drama like this before! The story and screenplay of Brahmastra are interesting enough to keep the audience glued throughout till the climax. There are a lot of twists and turns in the story that will keep the audience engrossed in thinking, “What’s coming up next?” The climax of the film is a bit long but is surely engrossing. The interesting screenplay has been amplified by super-sharp and crisp editing done by Prakash Kurup.

Even if Brahmastra is a fantasy-adventure film it is not set in the medieval era. This is in fact a modern love story that has been set in the present day. The best part about the plot is that the love story between Shiva (Ranbir Kapoor) and Isha (Alia Bhatt) is aptly connected with the concepts of the divine weapons portrayed throughout the movie. Before going to watch this film you may think that “Oh this is a story of divine weapons which has been somehow merged with a modern love story”. But No! The unique love story and action-adventure screenplay of Brahmastra beautifully merge with the theory of divine weapons.

The love story of Shiva and Isha in Brahmastra is heart-touching. At the core, this film is basically a love story. The story of the divine weapons has been merged into it just to make it a spiced-up fantasy-adventure drama. The story has a strong emotional thread as well which lasts till the climax. However, there are no scenes showing any kind of intense emotions which may possibly make you cry. One scene in the movie defines the concept of “love” and the message it conveys about love is so exhilarating that you may be forced to utter the word, “Wow”!

The 2 hour and 50 minute screenplay comprises some weighty dialogues written by Hussain Dalal. I will narrate some Hindi dialogues from the movie. “Woh Brahmastra Ki Kismat Ka Sikander Hain…Shiva!” which means, “He is the destiny of the Brahmastra. He is Shiva!” Another one goes, “Main Aag Se Jalta Nahi. Kuch Rishta Hain Mera Aag Se. Aag Mujhe Jalati Nahi” which means, “Me and the fire are related. That’s why the fire doesn’t burn me!”

Ranbir Kapoor as Shiva in Brahmastra was fantastic. He actually lived up to his role. His performance throughout the movie was extraordinary. I must say, Ranbir Kapoor excels in any role he plays be it a romantic role, dramatic comedy role or fantasy role. Ranbir Kapoor’s wife Alia Bhatt who plays his girlfriend Isha in this movie has matched up well with him in terms of chemistry, and she carried out her role to her fullest capability.

Supporting actors Amitabh Bachchan, Shah Rukh Khan and Nagarjuna carried out their respective roles as members of the divine Brahmansh group very diligently. Their characters individually possess the powers of some interesting divine weapons. Though they had short supporting roles, still Amitabh Bachchan’s impressive narrative style, Shah Rukh Khan’s charm and expressions, and Nagarjuna’s charisma spiced up the screenplay to the brim. These three film industry biggies guided Shiva in his quest to obtain the Brahmastra. WWE-based Indian wrestler Saurav Gurjar also has a short role in the movie, and he carried it out convincingly.

The lead villain in this movie is Junoon, the queen of darkness, played by Mouni Roy. Mouni Roy has been used to playing shape-shifting serpents and mythical creatures in several Indian television shows. I must say that her performance is impressive and she does make her screen presence amplified throughout the movie in the role of Junoon who wants to obtain the Brahmastra so that she can misuse it and cause havoc and destruction.

Upon watching Brahmastra I must agree to the fact that this fantasy-adventure drama has been made using top-notch artistic visual effects. The VFX backgrounds and the visual effects of the divine weapons are so mesmerizing that I am forced to believe that this movie is at par with international filmmaking standards.

If you are used to watching Hollywood movies like “Thor”, such visual effects may be no big deal to you. But talking about Indian filmmaking standards, I believe that such brilliant cinematic effects have been devised for the first time ever in the history of Indian cinema. The visually enthralling VFX has been amplified by the hair-raising and super-extraordinary background music which accompanied the portrayal of the divine weapons. I must say, this movie has an enhanced VFX on steroids! This visual feast has been cooked by the joint efforts of cinematographers V. Manikandan, Pankaj Kumar, Sudeep Chatterjee, Vikash Nowlakha, and Patrick Durox. The awesome cinematography of Brahmastra has been further amplified by the marvelous costume designs of the characters.

Ayan Mukerji has excelled as a writer and director with Brahmastra. His screenplay and narrative style are fabulous and they are indeed coupled with his classy direction. The best part is that he barely leaves any instances within the screenplay which could have diverted the minds of the audiences. His story and narration flow smoothly.

Not So Appealing Songs

I won’t say the songs in Brahmastra are bad. Honestly, they didn’t appeal to me much. As I said in my previous reviews before that I usually prefer romantic or sad songs which are filled with emotions and can pierce one’s heart. The songs in Brahmastra, in spite of being top-notch, failed to have an impact on my emotions. There are three tracks in Brahmastra titled “Kesariya”, “Deva Deva”, and “Dance Ka Bhoot” all sung by Arijit Singh. Although Arijit Singh has a magically melodious voice, the flow of the songs lacked rhythm which was the main reason for their loss of appeal.

But I must agree that the background music in Brahmastra devised by the joint efforts of Pritam, Simon Franglen, and Steel Banglez is fantabulous. Nothing can be compared with it!

Brahmastra has been shot across various global locations for a period of four years. Filming for Brahmastra began in February 2018. Filming locations across the world include Bulgaria, London, New York, and Scotland. The shooting for the film was finally concluded and wrapped up at historic fort locations in Varanasi, India. Some re-shoots were conducted as well by Ayan Mukerji.

This is my personal take. Yours can be different. To be honest, the concept of a petite woman like Mouni Roy taking on a 6 feet guy like Ranbir Kapoor is a big turn-off for me. I am not saying that women can’t take on men in one-on-one fights. There are ace female athletes, bodybuilders, and fighters who have the ability to take down the biggest of men during fights. But the story of Brahmastra is all about exercising the power of divine weapons rather than one’s body power. After all, there are lesser hand-to-hand combats and more divine weaponry combats which the hero and the lead villain indulge in. So here, a petite woman like Mouni Roy doesn’t bring much harm to the character of the lead villain, does she?

I usually prefer action movies involving machismo where a lionhearted hero takes on a fierce villain, who happens to be a man too. The reason is that I myself am a part-time wrestler and apart from being a film critic, I indulge in intense wrestling matches occasionally. So, it is quite obvious for me to favor action movies involving realistic raw hand-to-hand combats more than fantasy weaponry battles. I personally find the action scenes in Brahmastra to be quite convincing but not great. Most of the action scenes are fantasy weaponry fights that have no resemblance to real life. Being a practical person, I personally prefer raw action. This is probably the reason why action stars like Sunny Deol, Sanjay Dutt, and Suniel Shetty are my all-time favorites.

However, I am full of praise for the immense efforts shown by Dan Bradley, Dian Ristoff, and Pervez Shaikh in choreographing the action sequences in the movie. If you love watching fantasy-action films like “Thor”, then the action scenes in Brahmastra will surely excite and thrill you!

Overall, Brahmastra is a must-watch for audiences of all age groups. Whether you happen to be a school-going teenager, a college-going youth, a corporate professional, or even a retired grandpa, just grab hold of your popcorn buckets at your nearest theaters to experience and enjoy the thrilling adventure ride of Shiva in his quest to obtain the divine and the powerful Brahmastra and save it from falling into wrong hands! 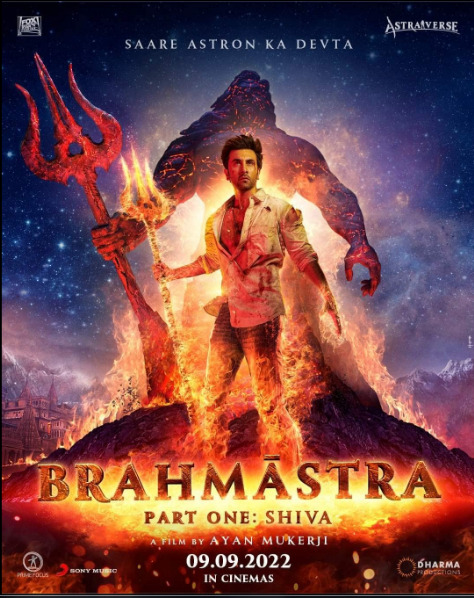