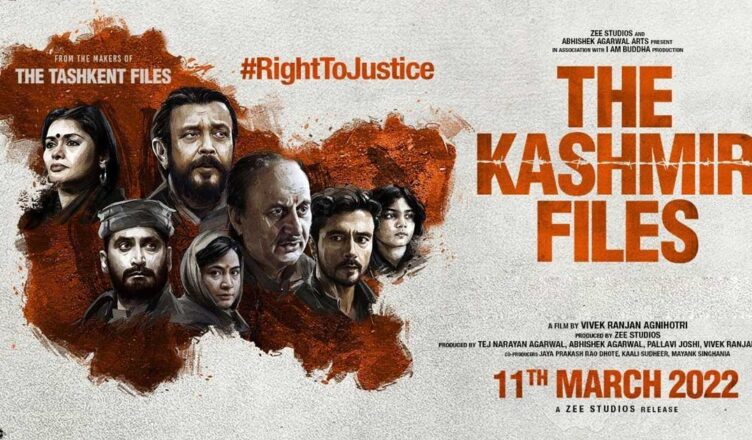 Kashmir is a disputed state in India. A little more than half of the state lies in India whereas the remaining portion has been forcefully occupied by Pakistan and is presently termed as “Pakistan Occupied Kashmir (POK)”. Till 1990, Kashmir was home to the Kashmiri Hindu Pandits. During the early 1990, the Kashmiri Hindu Pandits were forced to vacate their homes and leave Kashmir by the Muslims of the region. The Muslim-majority population killed several Kashmiri Pandits and their families along with creating mass havoc and destruction of their homes. This led to a mass genocide of the Kashmiri Pandits. This early 1990 exodus of the Kashmiri Hindus led to the rise of violence due to Muslim insurgency in the disputed region of Kashmir which still persists.

Writer and director Vivek Agnihotri brings a heart-wrenching tale of the pain, suffering, struggle and trauma faced by the Kashmiri Hindus during the exodus in the form of a historical drama titled “The Kashmir Files”. The Kashmir Files is based on a fictional storyline and delivers the narrative of the exodus from the eyes of a Hindu college student named Krishna Pandit. Krishna, as the story portrays, was displaced during the exodus when he was a child after his family was killed by Muslim militants. He was brought up by his paternal grandfather who was a schoolteacher and had witnessed the deaths. His grandfather shielded him from obtaining knowledge about their circumstances. After his grandfather passed away, Krishna proceeds to uncover the dark truth behind his family’s death.

The scene opens showing Kashmiri Muslim militants storming in the Hindu-occupied regions with slogans, “Convert to Islam, or die!” and “Kasmiri Pandits, vacate the valley!” They rampaged on Hindu homes, burnt them down and killed Hindu families including children, thus creating a mass genocide. The Kashmiri Hindus were forced to flee and vacate the region. A schoolteacher named Pushkar Nath Pandit (Anupam Kher) was aware of the uprising of Muslim militants and feared for his son Karan’s (Amaan Iqbal) safety. Karan, who was there in Kashmir at that time, was accused by the militants for being an Indian spy.

In order to protect Karan from the militant insurgents, Pushkar took the help of his friend Brahma Dutt (Mithun Chakraborty) who was an Indian Administrative Service (IAS) officer. Pushkar and Brahma traveled to Kashmir to find Karan when the violence against Kashmiri Hindus by the militants was at its peak. When Brahma took Karan’s issue to the Chief Minister of Jammu and Kashmir, he simply suspended Brahma without offering them any help.

With no one ready to help Karan, he hid inside a rice container at his father’s house. The commander of the militants, Farooq Malik Bitta (Chinmay Mandelkar), who happened to be a former student of Pushkar, barged into Pushkar’s house and found Karan hiding. Upon finding Karan, he shot him. The injured Karan lay on the floor while Pushkar and his daughter-in-law Sharda (Bhasha Sumbli) pleaded before Farooq to spare them. Farooq offered to do so if Sharda would eat some rice which was soaked in her husband’s blood. Farooq compelled Sharda to eat Karan’s blood-soaked rice and she had to eat it.

Farooq and his militant group left Pushkar’s house and Pushkar immediately took help of his doctor friend Mahesh Kumar (Prakash Belawadi) to bring an ambulance so that Karan could be transported to the nearest hospital. However, when they reached the hospital, they found it to have been taken over by the Muslim militants who warned the hospital staff to not treat non-Muslims. Upon receiving no treatment at the hospital, Karan succumbed to his injuries.

For their safety, Pushkar’s journalist friend Vishnu Ram (Atul Srivastava) came to his and his family’s aide. Vishnu took him and his family to a Hindu poet named Kaul who was known for maintaining a cordial relationship with the Muslims. Kaul was offering shelter to several Kashmiri Pandits at his home at that time.

However, after they reached Kaul’s home, they found some men had come to pick up Kaul and his son to offer them protection. After picking them up, they left the place with several other Pandits following them.  When the group of Pandits traveled up to some distance, they were shocked to find the corpses of Kaul and his son hanging from the tress. Those men who had come to escort Kaul and his son were in fact Muslim militants in disguise! As Kaul was offering protection to the Pandits, they murdered him and his son in broad daylight.

Now the refugee Pandits from the Kashmir valley had no place to go! Their conditions turned pathetic and they had to settle in the Jammu region and live on meager ration and poor conditions. Meanwhile, the Chief Minister’s rule in Jammu and Kashmir ended and the Governor took over the state. The new Governor of Jammu and Kashmir appointed the suspended Brahma as his advisor. Upon regaining his powers, Brahma requested the Home Minister to visit the camps in Kashmir where Pushkar demanded the minister to remove “Article 370” from the Indian Constitution which in turn would allow the resettlement of Hindu Pandits in Kashmir. In the meantime, Brahma managed to get Sharda a government job in Nadimarg, Kashmir. Pushkar along with his daughter-in law relocated to Nadimarg.

Things were going well for Pushkar and his family till one day, a group of militants headed by Farooq disguised themselves as members of the Indian Army and arrived at Nadimarg. They started rounding up the Pandits in that region. They caught hold of Sharda’s elder son Shiva (Prithviraj Sarnaik). Upon seeing this Sharda resisted back. This angered Farooq and he tortured her and stripped her naked in the middle of the streets. But that was not all! Following this, Farooq “the barbarian” dragged her to a sawmill and sawed her alive in half! This was probably the bloodiest, goriest and most disturbing scene ever!

After this, Farooq assembled Shiva and all the Hindus in that area and murdered them by conducting a mass shooting. But the barbarian Farroq did have a bit of humanity in him! As Pushkar was his ex-teacher, he spared the shocked and frightened Pushkar and asked him to spread the news of his tyranny and barbarism so that people (Hindus) would fear him.

The story moves to the year 2020 in Delhi where Sharda’s younger son Krishna (Darshan Kumar) is brought up by Pushkar. Pushkar, being Krishna’s paternal grandfather, told him that his parents Karan and Sharda had died in an accident. Krishna was highly influenced by his university’s professor Radhika Menon (Pallavi Joshi) who supported the Kashmiri separatism. Radhika thought that the Indian government was responsible for the event, whereas in actuality it was not so.

The scene proceeds and we see the friends of Pushkar; Brahma Dutt, Vishnu Ram, Dr. Mahesh Kumar, and police officer Hari Narain (Puneet Issar) who had served in Kashmir when Karan was killed, recalling the genocide events in the state.

The story proceeds, and Krishna contests for the student election which was being held at his university. As Krishna happened to be the follower of his professor Radhika, upon her advice, he held the Indian government responsible for the Kashmir insurgency of 1990. When Pushkar came to know about this, he became angry on Krishna as Krishna was exercising his own judgments and was completely unaware of the actual incidents.

Pushkar requested Krishna that after his death, he must travel to their ancestral home in Kashmir and scatter his ashes there. So after Pushkar’s death, Krishna was all set to travel to his ancestral home in Kashmir to scatter the ashes as per his grandfather’s last wish. As Krishna was going to Kashmir, Radhika requested him to record some footage in the state in order to expose the supposed atrocities of the Indian government.

Radhika put her contacts to work and with the help of one of her contacts, Krishna met Farooq “the barbarian” who had ruthlessly murdered thousands of Hindus including his parents. But Farooq “the barbarian” was an old man now! All his barbarism and vigor had vanished and he was leading a non-violent democratic movement in the state. What an amazing change of personality!

Krishna knew that Farooq was behind the genocide and publicly accused him of being responsible for the situation of the Kashmiri Pandits. Farooq claimed that it was the Indian Army who killed Krishna’s mother and brother, whereas the truth was that he and his militant group were disguised in Indian Army uniforms while committing the murders. Krishna questioned Brahma about Farooq’s claim that the Indian Army killed his family. Upon hearing this nonsense Brahma handed him some newspaper cuttings, which were collected by Pushkar, which clearly stated that Muslim militants disguised as Indian Army soldiers were responsible for the mass murders of the Kashmiri Pandits and also Krishna’s family.

Krishna returned to Delhi and gave his scheduled speech for the university presidential elections to a roaring crowd at the university’s campus. During the speech, he elaborated on matters he perceived from the trip, which included the history of Kashmir and the plight of his family and other Kashmiri Hindu victims. Professor Radhika as well as the university students were shocked upon knowing the actual incidents which Krishna revealed during his speech. After completing his speech, Krishna met resistance and ridicule from many students who were not ready to believe him. But there were also a few of them who embraced him and believed his story.

Stay Tuned For My Review Of “The Kashmir Files” Coming Soon! 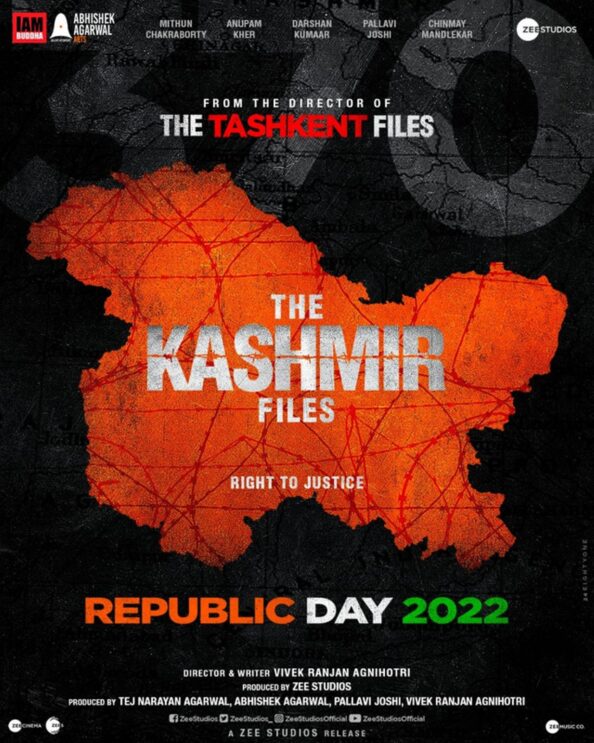