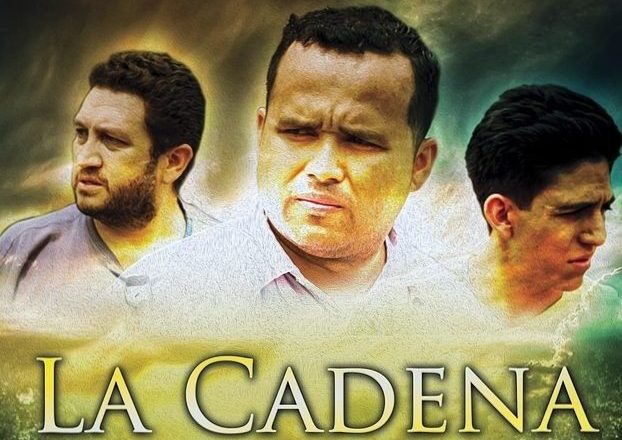 La cadena is Spanish for “the chain”.  The new movie “La Cadena” is a slice of life examination of a quiet man serving as a link, connecting with others in Christian faith. Then they in turn, nurturing a continuing cycle as the meek inherit the earth.

It is a simple story.  Yet with profound revelations.

Alfred Castillo wrote and co-directed “La Cadena”.  I spoke with him.

“La Cadena” is your first film calling the shots, splitting directorial duties here with Lamarcus Tinker.  Share with us the challenges, rewards and surprises of this debut experience, and also about how your movie came to be a co-directed project.

As a Christian actor, I found it increasingly difficult to find work in the Houston area without compromising my faith. I felt God was calling me to rise and up and create faith based, family friendly content. I responded to the call and began writing “La Cadena.” Upon completion of the script, I kept an eye out for likeminded filmmakers. After responding to a Christian film casting call, I was cast as a coach in the film entitled “Walk by Faith,” directed by LaMarcus Tinker and Joan Montreuil. The film was soon picked up by Bridgestone Media Group (BMG), a distributor of family-friendly entertainment. I was impressed by their accomplishment and wanted to emulate their success.

Since this project would be my debut as a writer, producer, and director, I wanted to have the guidance and wisdom of industry professionals to ensure the film’s success. I approached Lamarcus Tinker to see if he would be interested in showing me the ropes. He read the script and immediately saw potential and agreed to co-direct this film with me.

This film had plenty of challenges and surprises along the way. You would think casting for a Spanish Speaking movie in Houston, with the 4th largest Hispanic/Latino population, would be a breeze, but I found it difficult. I had to expand my search and attend a few Hispanic churches until I found the talent I needed.

I encountered some issues in post-production. In this digital age, I have learned that multiple backups and file management are a necessity to ensure continuity of the film. We lost some original footage that we had to replace with some stock footage. Close to the film’s picture lock, the main hard drive crashed, and it took several months to recover the footage and piece back the timeline to restore the film.

The film was shot over a 5-day period. That seemed to be easiest part of the film lol. I rehearsed several times with the cast prior to filming and with all the locations and dates set, production was a success. It was very rewarding to see the vision that God had given me come to life on the screen. Watching the actors deliver their lines and following my direction was breathtaking. I never knew writing and directing could be so satisfying. I was hooked and will continue creating content in the years to come.

Clearly it is important to you that Ricardo is shown to be “a regular guy”.  We see him go through his regular morning routine as he prepares to go to his job as a construction worker.  There are long stretches of the film depicting the Houston, Texas neighborhood he lives in and the environs surrounding it.  The resonate message is that this is a man doing the best he can to support he and his wife, live a life of faith and be a beacon of light for others.  The upshot is that we are all Ricardo.  And that each of us have something of value to offer our world.  Talk about this driving theme that runs throughout “La Cadena”.

Many Christians can relate to Ricardo. They are everyday people; diligent in their work/responsibilities as a parent, spouse, employee, and faithfully serving the Lord. It is outside of the church walls/our homes where we tend to mind our own business and keep silent about the things of God, especially with non-believers. That’s not to say that we will deny the Lord in the workplace or in the supermarket if confronted, but we just tend to keep our faith to ourselves. We just don’t bring it up.

I wanted to create a story that displays the Lord’s work through every day, common believers. The Bible says that we are each given a measure of faith. It also says that if we have faith the size of a mustard seed, we can move mountains through God’s supernatural power.

The other thing to observe in this story is when you step out in faith for the Lord, the unbelieving world will be watching. In a “La-La” fantasy Christian world, everybody responds and receives God’s gift of salvation. Acts Chapter 17 verses 32 – 34 is the premise of the film’s message. The world we live in does not embrace the gospel message all at once. Different people respond in various ways with some rejecting the gospel, some considering it, while others accept it by faith and become saved. By exhibiting boldness for the Lord, we release our faith and leave the results to God. We do our part, we let God do His.

“La Cadena” features an almost entirely Hispanic cast and Spanish is the predominant language spoken.  As an Hispanic American, Alfred, talk about the Latino experience in our country from a personal perspective and about how Christian faith plays a part in the culture and heritage of the people.

As a first generation Mexican American, I was instilled by my parents the value of hard work and the importance of education. My parents worked diligently to provide for me and my sister. It was their desire for us to live the American Dream: Study hard, graduate from college and become a productive member of society. While I always had that in the back of my mind, I also developed a passion for acting. I used to watch movies and imitate characters to my family and friends, but my parents never saw that as a viable career option. It was merely entertainment, something to enjoy after a hard day’s work. I set aside my dreams to fulfill their plans for my life. I embraced the attitude “if it is meant to be, I will be an actor one day.” I am proud to say that I was able to honor my parents by excelling in my studies, receiving a full scholarship, and graduating as the top student in my class with a Bachelor of Science in Civil Engineering. One of the happiest days of their lives!

I can’t speak for all the Hispanic people, but my observation is that we tend to be very religious. We have a God consciousness that has been instilled in us as children by our parents, by the church. It shapes the way we approach life and death. We acknowledge God’s sovereignty in our conversations by saying “Si Dios quiere” or “Primero Dios,” meaning “God Willing.” Throughout my life, I witnessed countless people who were “religious” by default of our Latino heritage but failed to live a “holy” life inside the homes. I rarely saw a difference in people, before or after attending church. A drunk family member remained a drunk. An unfaithful spouse remained the same. As a child, I thought that’s the way it was.

My mother was raised Catholic from her childhood but was never devout. She attended church occasionally but wasn’t fully committed. It wasn’t until my little sister’s health was on the line when my mother soon examined her faith. She sought God through this trial and vowed to commit her life to Him should He see her through this. The Lord healed my sister and my mother, true to her word, surrendered her life to Christ and began her Christian walk at a local Pentecostal Church. I saw the radical change in her lifestyle; spending most of her time in church, praying, reading her Bible and living the “holy” life that I rarely saw in “religious” people. Many years later, I would come to know Jesus as my savior, another happy day in my mother’s life. Soon my wife followed suit, my kids, my wife’s family. My family and I will be in heaven because of my mother’s faithful witness to Christ.  She served the Lord for nearly 35 years before passing away in May of this year.

I continue in her Godly legacy. It impacts the way I live my life as a husband, father, entrepreneur, actor and now filmmaker. My prayer is that I may lead a life that will allow others to come to Christ.

I watch and review a lot of movies.  As a Christian, I am mystified and deflated by the consistent portrayal of those of faith as unstable or simply as flat-out detached nutjobs.  I would imagine you see this scornful mentality pervading the secular motion picture industry, as well.  Why do you feel this is?  Did this disparagement play a part in inspiring you to produce faith-based properties?

Thank you for bringing this to the forefront. It does alienate me to see secular motion pictures portray men of faith “sipping adult beverages, puffing cigarettes/cigars like a chimney or committing sexually immoral acts” without subsequent scenes of redemption or repentance. With these images etched in our minds from major Hollywood productions, we tend to “accept” this type of behavior as the norm. It brings to mind the scripture in Isaiah 5:20 that states “Woe unto them that call evil good and good evil, that put darkness for light and light for darkness;”

Mind you, we are all sinners. Christians are sinners saved by grace. Christians are not sinless; we just sin less. Regardless of how we see it, those of faith are imperfect people (nutjobs included) serving a perfect God.

I cannot say that the “mainstream image of people of faith” inspired me to write this film. I wrote this story simply to show that even the insecurities of a believing Christian can set the stage for God to operate, and in this case, in the presence of “our enemies” or Ricardo’s coworkers. Maybe Ricardo wasn’t unstable or a nutjob, but he was someone who didn’t have it all together. He comes to find out that a little boldness goes a long way. God saw it and granted his request for His glory. This was the point of the story.

My next project is inspired by a true story involving a newlywed Christian couple and how they deal with finances. Basically, it is a story about giving. It will involve encounters with both believers and non-believers. This comedy was written not only to showcase their flaws and struggles, but also how to trust in God for their provisions.

I am currently writing a script that will follow the life of a Tejano musician. While that sounds glamorous and full of excitement, a lifestyle of sin opens the door for Satan to steal, kill and destroy. This Christian drama will involve adult themes showing the bad, the ugly and the good (not the correct order but intentional).