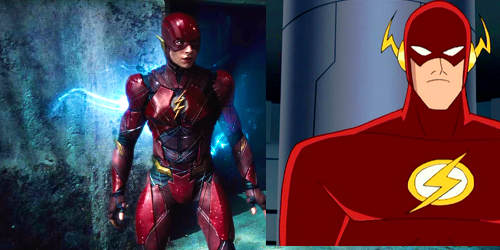 The Flash movie has been shuffled on the Warner Bros. release calendar again. I’m sure for something, there’s still ‘hope’ that the DCEU is still going to be a thing. There’s still some faith that the worst is behind us and there’s a bright future. One of those two statements are true and evidence has been produced in the new 2021 release date for The Flash.

Warner Bros. is pushing back the start of filming on the studio’s still untitled standalone Flash film, sources tell Variety. The film never received a formal greenlight nor did it have a set release date, but it had been expected to begin shooting in March. However, a script is still being tweaked and the studio thinks that it won’t have enough time to get the script in shape in order for the film to make its original start date.

That’s a problem, because Ezra Miller, the live-wire performer tasked with playing the Flash, also has a key supporting role in “Fantastic Beasts,” the “Harry Potter” spin-off series. The third film in the franchise begins shooting in July, which would cause scheduling headaches. The standalone Flash film is now expected to commence production in late 2019. That likely means the superhero adventure won’t debut in theaters until some time in 2021…

If true, we’ll be seeing a massive 4 year gap between appearances for Ezra Miller’s Barry Allen since Justice League. Spider-Man rebooted in less time than that. I believe that there is some merit in using the excuse of Ezra’s commitment to the Fantastic Beasts films. We’ve seen what Sophie Turner and Maise Williams’ other commitments have done to the X-Men release schedule.

The truth is that the DCEU is over now. Aquaman and Wonder Woman are posed to be standalone films. Henry Cavill and Ben Affleck have departed and DC isn’t too committed to making Batman and Superman films anytime soon. Joker Movies are being made right now that have nothing to do with the DCEU. IT’s over.