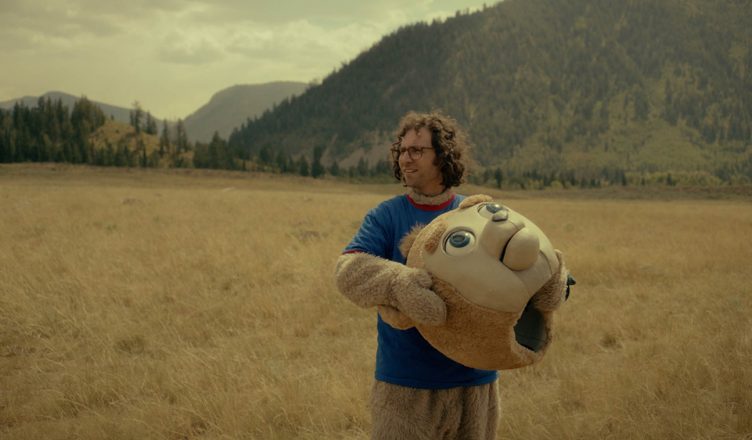 I just watched a movie that could have been really stupid. Really silly. Really mindless. And done as an offbeat dramedy is typically tossed out to us from Hollyweirdworld, it surely would have been. But the bunch behind “Brigsby Bear” clearly determined early on that this is what most would be expecting. And they cried a collective, “Hell no!”. The result of such scarce solidarity among the measure of movie making magicians has resulted in a funny, freaky and ultimately touching story. “Brigsby Bear” succeeds in bringing to bear the likes of that which is seldom concocted, nor bankrolled, in the biz of busting the beatific box office. Fabulously fresh faire fully worthy of our focus.

As I am not a patron of Saturday Night Live I was wholly unfamiliar with “Brigsby Bear” star and co-writer Kyle Mooney. This is an interesting looking, and behaving, guy who put me in the mind of a kind of curious cross of affectation and physical resemblance among Dana Carvey, Steven Wright, Joel Coen and R.E.M. bassist Mike Mills. Damn, is that quite the broad-based brotherhood if ever there was one.

And while on the subject of eclectic, let’s talk about this spectacularly cool cast. It is not just any flick that combines the wildly diverse entertainment resumes of Greg Kinnear, Mark Hamill, Jane Adams, Claire Danes and Andy Samberg (who also Co-Produces here).

So what is “Brigsby Bear” about you’re no doubt asking? On face, it’s about a “well meaning” survivalist couple abducting a baby, who decades later is returned to his birth family as a grown manchild, obsessed with a kid’s TV show of which he was an audience of one.

But what this quirky and affecting saga is really about is the definition of family, and the many forms and incarnations defined therein. The overarching message is this-that support, encouragement, understanding and love are not necessarily the stuff of rigidity and tradition. Rather, it is a common bond among souls. Souls that matter to others more than anything in the world. And in the strange case of “Brigsby Bear”, it makes little difference whether that connection is forged in “real life” or from the limitless vitality of the human spirit.

After all, isn’t this the eternal truth to which each and every one of us bear witness?

"Brigsby Bear": Proclaiming the Power of Family with a Gentle Roar

"Brigsby Bear": Proclaiming the Power of Family with a Gentle Roar

What this quirky and affecting saga is really about is the definition of family, and the many forms and incarnations defined therein.