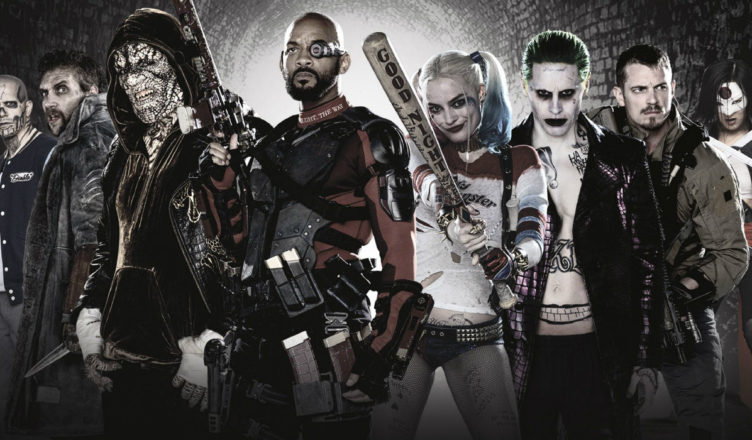 Synopsis: A group of dangerous villains brought together to conquer a greater evil.

One of mine any many others most anticipated summer movie has arrived, and I wish it didn’t. It was going to be tough to live up to all the hype the movie was receiving for month. The pressure was on it to make up for Dawn of Justice (a far better movie), and it failed. So who is the Suicide Squad and what’s their objective? There doesn’t need to be a big summary for this. U.S. government official Amanda Waller (Viola Davis) assembles a team of the worst of the worst (in a good way). The team of baddies consists of Deadshot (Will Smith), Harley Quinn (Margot Robbie), Boomerang (Jai Courtney), Diablo (Jay Hernandez) and Killer Croc (Adewale Akinnuoye-Agbaje). Running the squad is hardass operative Rick Flag (Joel Kinneman). Their mission is to stop the evil and mystical Enchantress (Cara Delevingne) from taking over the world. Phew, there it is.

The first half of the movie was a real good buildup and introduction that had me excited for what’s to come later on. The only problem is what came later on, was something I was hoping it never did. Staying on track. The first half of the movie centers on the backstories of all the Suicide Squad characters. The questions are answered as to how they all got captured and ended up in maximum security jails. Each story is chronicled one-by-one. Each character has link to the outside world that make them a bit more mellow. For example, Deadshot is longing to be reunited with his young daughter. Harley is lusting to be back with the Joker. A few of these characters have emotional attachments to others in the outside world.

When this ragtag group of villainous misfits finally meet the fun begins. The characters were all well cast. Will Smith plays Will Smith. You know what I mean, yet he still feels right for the role of Deadshot, he has a lot of personality and brings out the best humor. Robbie is a natural fit for Quinn. She’s uber (not the car service) sexy, charismatic and entertaining. She’s slightly over-sexualized, but that’s true to the character. The rest of the cast is more than suitable for their roles.

The two actors that stand out are Davis and Kinneman. First with Davis. She owns the role of Waller. She’s cold, calculated, no-nonsense and borderline ruthlessly bad. Someone you certainly wouldn’t want to cross, which adds to her imposing nature of being in charge of these wacky villains. Kinneman really surprised me in the role of Flag. He’s the ideal hardass soldier. It’s really a perfect role for him to play. He doesn’t seem intimidated at all by handling these dangerous group of baddies. He’s authoritative and commanding. He has the look that fits the part. He’s pretty damn good in this film.

So what about the Joker? Well, that brings me to this…

The biggest buzz for the film might have surrounded the Joker character. Coming off the iconic performance (slightly overrated also) of Heath Ledger, the pressure was there for Jared Leto to do something spectacular with the character. Spectacular it was not. Leto basically mimics the Ledger Joker character. The mannerisms, the speech patters, even the way he sounds was very similar to the Ledger version of the character. That’s truly disappointing for the caliber of an actor as Leto to lean on so much of what Ledger did. The “new” Joker looks cool. He’s pretty much a gangster hippie. You can tell that the script was aiming for it to be a lot different than the Christopher Nolan version, but Leto plays it against the script. There could have been so much they could have done with this Joker, but they miss the mark.

The worst offense this movie brings about is the lack of direction and identity that it has. The first half would suggest that it’s aiming to be a dark DC movie that fits along with the previously established Man of Steel and Dawn of Justice. The second half suggests that it’s mystified and swept away in a fantasy world of supernatural lore. The CGI goes way too heavy. The portal of destruction that clouds the skies with radiating energy had me debating whether Krang would be appearing or if Melissa McCarthy and Kristen Wiig were coming back to get some ghosts. Maybe an outside chance the Winchester brothers arrive to deal with the spirits. It was that cartoony and goofy. What the hell were they trying to accomplish? I get it, the Enchantress is pretty mystical with her supernatural powers, but to blow it up that obnoxiously full-scale was a major disappointment.

The movie starts out about a whole lot of chatter about the death of Superman. Clearly it’s established that this follows the events of Dawn of Justice. The brief flash of The Flash is also mixed in there, along with a decent amount of scenes where Batman is catching these villains like Pokemon and getting them put in jail. Which lead me to ask this question the entire film–where the hell is BATMAN!! The world is falling apart, the same villains that are forced to save the world are the ones that Batman put away. Why not flash the signal and get Batman to take care of this mess. The plot makes no mention of the Caped Crusader at all. Is he alive. Is he in Florence on a vacation. Why the hell isn’t your top superhero attempting to save the world. It’s criminal that they don’t even suggest and answer to this question, and try to make you forget there is an actual hero around, with a group of friends that fight for justice hiding in the shadows.

Suicide Squad had a good idea, but then forgot what movie they were. It’s as if they tried to be Marvel and go for the supernatural theatrics, ready to invite Thor into their world. They do some nice things with Harley and Joker. Their scenes together are both eerie and fun. Their history together is nicely tied up and elaborated. They could have easily done a movie on just those two.

One of the best things about this movie was the fact that the soundtrack is outstanding. A great mix of genres and artists will killer (no pun intended) songs. You’ll be hearing some Kanye and Eminem, and it couldn’t have been more fitting. Had the soundtrack been the sole judgement of the movie, this would have been a home run of a film. Unfortunately the plot matters.

Not finding an identity and feel for a movie that should easily have one just based on the characters and premise is a big fail. Suicide Squad could have been a lot more than it ultimately ended up being. I did appreciate their attempt later on in the film where the characters dark thoughts and pasts come to the surface in a fairly genuine way, but the damage was done at that point. Just as DC was getting back on a roll with a great July of Comic-Con victories, the very satisfactory extended-cut of Dawn of Justice and the impressive Killing Joke, Suicide Squad stops the momentum for now. This squad of villains only ends up managing to kill away your excitement. Here is a little extra bonus of my thoughts and some other notable critics via the Chicago Independent Film Critics Circle: