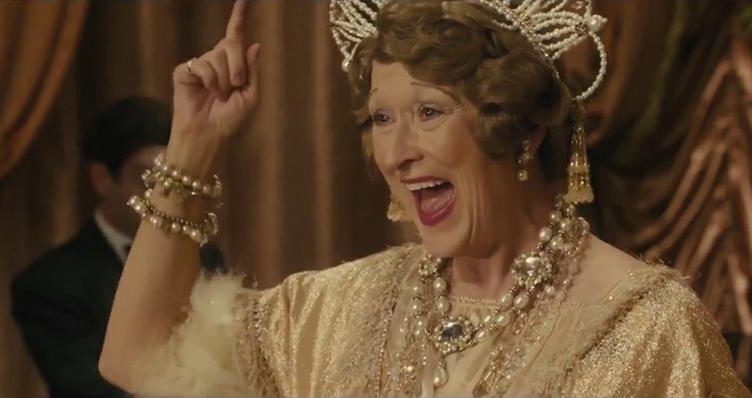 Synopsis: A wealthy New York heiress is led to believe that she’s a famous Opera singer.

This is a pretty crazy story based on true events. I had no idea that Florence Jenkins was a thing back in the day in NYC. The films takes a bit to warm up and get going, but once it does it had me curious as to where it was headed. This could have been a lot more of a dull movie had the comedy not been pumped up throughout.

The sets, costumes and look of the movie is majestic. It is grand and vintage. Lots of golden and light color palettes enhance the perception of wealth that Florence indulges in. New York is portrayed in very high scale and Hollywood kinda way.

Simon Helberg plays a pianist who is tasked with playing to Florence’s vastly underwhelming singing. He’s the most genuine comedic relief in the movie. Just the quirky and goofy character that balances out the serious Florence. Hugh Grant is also solid in the movie. While it might not be Streep’s best performance, it’s a fairly interesting character she plays in Florence.

The movie misses the mark on what it aiming to portray. It plays as a comedy about an blinded rich heiress, but what it really turns out to be is a cruel joke. All the people that Florence trusts in and pours her money into are the least truthful people in her life. The public thinks of her a crazy old lady that’s a joke. The man she loves, St. Clair Bayfield (Grant), does more shady things behind her back (having a mistress) than he does good for her. They treat this poor woman like a child or someone with Alzheimer’s. It’s fairly sad.

The beginning of the movie is so slow, it nearly put me to sleep. By the time it’s obvious she can’t sing, I almost lost interest. The gags from her singing are also overdone. It’s so bad that it’s hard to withstand watching. I felt this movie tried playing for laughs more than depicting the story. It gets better later on in the film.

Look wise the film is very classic and vintage. They nailed the time period and presented New York as an alluring and important place. The quality of acting is solid, but not spectacular. The plot is a slow moving one, that can put you down in the beginning and not give you a reason to care. If you stick it out and give this movie a chance, it mildly surprises in the later stages. I was bothered by the perception cast on Florence, the fact that she appeared to be a kind and positive woman was overshadowed by the selfishness and greed of people around her. Florence Foster Jenkins is a niche sort of movie, where it has appeal to a more mature audience with it’s jokes and tone. Not for everyone. The curtain is lowered and the earplugs could come in handy with a sleeping mask.