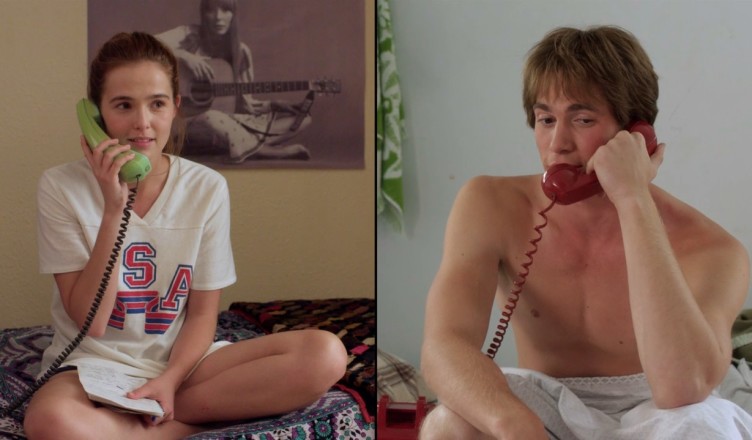 Synopsis: On the heels of his success with the groundbreaking drama Boyhood, director Richard Linklater shifts gears to sports for this comedy about a successful college baseball team that plays hard both on and off the diamond. Blake Jenner, Tyler Hoechin, Wyatt Russell, Ryan Guzman, Zoey Deutch, Will Brittain, and Glen Powell star. (Paramount)

If you’re looking for fun at the movies then Richard Linklater’s Everybody Wants Some is the movie to see. Linklater has made a career out of humanizing his characters and making them relatable humans. Placing them in a setting that is as close to real-time as you get on-screen. Once again he accomplishes that in this film, although in a college party setting.

The film is basically one long and fun college party. Unlike the slew of college party comedies that come out on a regular basis, this one has the typical Linklater tone of reality to it. A group of college baseball studs come together in a small Texas town and immediately craziness gets going. Even though the film features a heavy ensemble cast, the central figure it follows is freshman pitching phenom Jake (Blake Jenner).

There is a lot to like about this film. First and foremost it’s an obvious nod to Linklater’s classic Dazed and Confused, the movie marketing hasn’t shied away from it at all. The movie is just simply cool and fun. It doesn’t hide the fact that it’s a total guys movie. Told and seen from a college guys perspective. The film chronicles an entire weekend right before the first day of school. Don’t expect to see any studying being done. Not much playing baseball either.

Each character is carefully carved out and distinguished with their own unique and over-the-top persona. While Jenner is the main guy in the movie, the supporting actors aren’t depicted as secondary. Everyone seems to matter and have their background story mentioned. What resonates the most about these guys is the camaraderie and bonding that takes place between them. They live in a house filled with alpha males, even though they are ultra competitive with each other and give each other shit, the sense of brotherhood is evident. As wacky and crazy as they get, they are always there for each other and stand up for another.

All these guys are legitimate alphas, top of their respective food chain. They were all stars in their towns and now are gathered together. It’s sort of an All-Star team of talent and egos. Most films that depict college life tend to focus on characters who are lost and are searching for self-discovery, not in this movie. These guys know they are studs and have big egos, instead of fitting in, they are trying to gauge their place among their peers who are on the same, if not higher level.

Zoey Deutch is a fast rising star. She has that girl next door appeal and is beyond stunning. Plus she totally looks like JoJo the upcoming season of The Bachelorette, just look at the resemblance. First Deutch wins the affection of Zac Effron in Dirty Grandpa and in this film Blake Jenner’s character is smitten with her character Beverly. Hard not to be. She’s the only female character established that isn’t just a girl at a party. She’s the girl that in sorts gives these alpha male characters, especially Jake, a purpose to show another side of themselves. Once her character is introduced, a more sincere, shy, and in a sense real Jake appears.

The soundtrack used in the movie fits in perfectly with the theme. The main soundtrack theme of the movie is The Knack’s “My Sherona” and there couldn’t be a more perfect song for this film. Among the songs appearing in the film were Van Halen’s “Everybody Wants Some” and Cheap Trick’s “I Want You To Want Me”.

Some may complain that this is an anti-feminist sort of movie featuring alpha males that the movie is solely based on. These are guys that drink, party, and do dumb thing such as tee-off on beer cans from the roof of their frat house. Everything is seen from a young testosterone filled male perspective. Even though the movie takes place in the early 80’s, the look of it very much feels like the 1970’s. The clothing, disco, pornstache all just looks so 70’s. I’m sort of nitpicking the negatives, but unfortunately the film won’t resonate with me personally as it will with someone who grew up in those times the film is depicting and may relate to those college days.

So really, there is no plot to the film. It’s just one big party after another that takes place over a weekends time. There is no mention of school, much less any attendance. Aside from one long scene that takes place on the baseball diamond, there isn’t much focus on baseball itself. Baseball is just a prop in the scheme of it. No story plot gets advanced, the movie just sort of happens and it works that way.

What Linklater ultimately delivers is college party version of Boyhood that takes places over a weekend instead of a decade. It’s just fun watching them have stupid fun. The film isn’t about telling a story, it’s about reliving your own personal glory days of college. It’s that personal relatable aspect that justifies all that happens. In a few years we might look back and see more impactful results that end up coming out of the film. Many of these actors are fairly obscure now, but are poised to breakout into the mainstream. Zoey Deutch, Tyler Hoechlin, Blake Jenner, and Ryan Guzman have star potential written all over them. Guys like Will Brittain, Glen Powell, and Wyatt Russell (Kurt’s son) should be names to look out for also. Sometimes the best purpose a movie can serve is to not make you think. Enjoying the antics on-screen and not thinking about a plot. Ultimately everybody wants some fun, and this movie is just that.

One thought on “Review: ‘Everybody Wants Some’ Is The Party Version Of Boyhood”