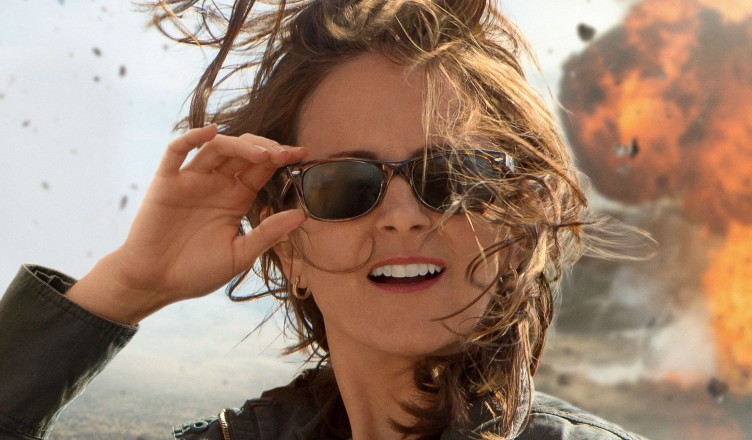 Synopsis: SNL alumni Tina Fey steps into the well worn shoes of journalist Kim Barker in Paramount Pictures’ adaptation of Barker’s memoir The Taliban Shuffle: Strange Days in Afghanistan and Pakistan, which details her years as a reporter in Pakistan and Afghanistan beginning in 2002. (Rotten Tomatoes)

WTF! Yeah, that’s the acronym behind the title of the movie, but it’s even more fitting for the summary of it. Wtf is going on then? A lot of partying, boozing, sex, oh and then there is some dodging bullets and bombs going off. That’s quite the contrast in one film, but for whatever reason it works in Whiskey Tango Foxtrot.

Tina Fey plays takes on the role of real life Tribune journalist Kim Baker that the film was inspired on. The films adaption is based on Baker’s memoir The Taliban Shuffle: Strange Days in Afghanistan and Pakistan. In the movie Baker is frustrated with her life and decided to do something radical–accept a job transfer to be a journalist in Afghanistan. That would be the first place I’d want to go for a change of place to my life–NOT. It’s a bold decision that leads to a lot of drugs and partying, and an occasional bullet dodge and land mine blast off. In the middle of all the chaos, relationships are formed, ended, and some are tested.

I’m not sure what Whiskey Tango Foxtrot is or trying to be, but maybe the filmmakers might be wondering the same thing? Is it a serious drama with a lot of comedic moments? Is it a comedy with some serious dramatic moments? Maybe it’s a “dramedy” that doesn’t know what it is and doesn’t care, besides showing the audience a good time with some explosive moments (literally). The inability to distinguish itself is what makes it unique.

Rarely you get to see war movies depict war in such a seemingly realistic way, but also show you the lighter side of it. Explosions, brutal deaths, machine guns rambling off are trademarks of war movies, they are to be expected. WTF does deliver that, but what it also manages to accomplish is take you behind the scenes of the lives of the press and to some extent the soldiers stationed in those war zones. The partying, the drugs, the sexcapades. I’m not one to have reported from such locales, however realistic the depiction in the film is, those people have to have some fun in those bland, sand covered regions, right? I appreciated the humanization of these characters. They become relatable in a sense.

The soundtrack is obscurely phenomenal. The wide variety of songs heard throughout the movie will surely have you reacting in some way. Few of the songs that appear in the movie (that fit really seamlessly with the action on screen) are a-ha “Take on Me” (so 80’s), Kid Rock’s “Bawitdaba”, House of Pain “Jump Around” (funky early 90’s), Harry Nilsson’s “Without You” (no Mariah Carey did not create that), and how could you have a war themed film without “The Chipmunks Song”! This officially became the coolest and most bizarre movie soundtrack ever.

The comedy drama war concept will confuse and rub some the wrong way, it’s understandable. People like their films clear-cut and defined. I found myself wondering if it’s worth investing time into these characters who only care about boozing and partying, sabotaging their colleagues, and risking lives of others in order to gain a story. These aren’t overly redeeming characters that you constantly want to root for, but they are humanized by that same fact. A few key scenes, one involving the Afghan Attorney General portrayed as a caricature of sorts by Alfred Molina are over-the-top and plain goofy.

WTF is Tina Fey’s best movie role yet. It’s also one of her best characters she’s played (excluding Sarah Palin impersonations). Going into it I had a hard time believing that she would be able to be a right fit for this film, not only did she prove me wrong, she exceeded all expectations and showed a side of herself that hasn’t been seen in her performances. Margot Robbie was just as good. She plays a real good though ass with a mean girl streak. I mean who am I kidding, no matter how ruthless and calculated Robbie’s character Tanya Vanderpoel is, Robbie is just so damn hot and likable. That woman oozes sex appeal without even trying.

I really enjoyed for all that it was. It provided enough legitimate laughs and compelling character story arc to keep me engaged throughout. The comedic moments are funny, and the dramatic moments are serious. The movie ultimately finds the right balance. One of the best lines in the movie comes when Tanya greets Kim and describes her newfound fame and expectation in Afghanistan “In New York, you’re like a six, seven? Here, you’re a nine–borderline ten”. Well here, this movie is a 7…borderline 8.