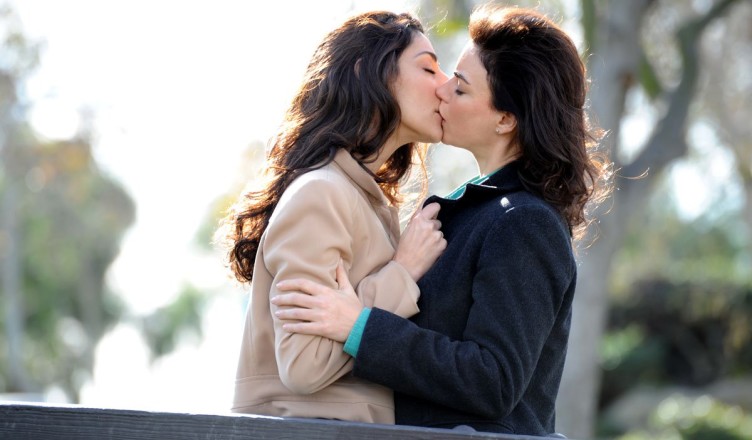 Synopsis: Fate brings two diversely different women together, and sets them on a collision course that will shatter their preconceived notions about love, life and the power of one’s soul. (IMDB)

Forbidden love, or love that comes with controversy has always been an intriguing subject dating back to Shakespeare days. There’s just something about the “forbidden” that makes someone want to see, hear or do more. The problem with movies that involve female lovers is that it’s often over-sexualized, however director Nicole Conn, and all of the actresses within this movie steered toward a different direction.

This movie classifies as a very artistic movie that dives into the subject of love in all shapes, sizes, gender and sexuality. It even opens in sort of a documentary style where they have a couple, male and female that talk about how they first met and how they knew that they were in love. It even pans to two women walking toward each other looking at each other intently.

So now we have Elena (Necar Zadegan) a beautiful and traditional woman. Actually she’s about as traditional as it gets. She’s of Indian Descent with a strict upbringing. She’s married to a pastor named Barry (Gary Weeks) to whom of which they have a teenage boy together. We see that they are clearly trying for another one as it pans to a scene where they are appear to be having emotionless intimacy. It’s clear that Barry is really pushing for another child but we see that Elena is strained and not really enjoying where she’s at in her life at the time.

The church she attends is really gung-ho about presenting homosexuality as a terrible sin and how their marriage rights should not be granted. Her husband Barry is the main leader of this anti gay pack while Elena listens half heartedly. She confides in her lovable (yet seemingly gay) friend Tyler (Sam Harris) who’s also a love guru that holds seminars for people looking for love and yearning to find their soulmates. The term “soulemetry” is used by him throughout the film and in the random documentary style scenes with different couples.

Next we’re introduced to Peyton (Traci Dinwiddle) who is an open lesbian and novelist that recently lost her mother. She encounters Elena by chance at one location where they are briefly introduced. Next by a Shakespearean fate, they are both at a love guru event where Peyton’s best friend dragged her to. By chance…fate I should say, they see each other and are aquainted again but this time followed by more conversation. We find out Elena is also a photographer which sparks Peyton’s interest.

They hit it off immediately and Peyton eventually comes out to Elena. I like how the film inserted the initial awkwardness when you first “come out” to someone (very relatable). Elena insists that she supports and goes on to ramble about how she voted “yes” on Proposition 8 and her beliefs. Ironically her husband and current lifestyle scream the opposite. So as they hang out more and more we see the tension between them build. Elena starts to get excited to see her and makes flirty eyes and gestures towards her. She even starts to realize a school girl crush is developing but quickly dismisses it all. Both of them know there is real attraction there.

The thing that is presented well with the tension building dialogue is what is unspoken. In this film I give a lot of props to the actors and actresses with the non verbal cues. I have never been as convinced about two people being in love as I was for the two people in this movie. The look in their eyes was very natural and foretelling and it was artistically well done when they finally gave into both of their urges.

I could be bias and say that no wonder this was directed by a woman since this film was built off of mainly emotion over just physical sex and intimacy. It’s clear that it is more than just that and as we see Elena go through a journey of battling with her sexuality and what she wants out of life, it’s easier to really get caught in her character and feel exactly what she’s feeling. The film from the beginning lets us know it’s about love and finding one’s “soulemetry” without sounding too corny or mushy.

Overall I’d say this was well done as romantic story is highly compelling and believable. There were few parts that were slow and I’d say that the one downfall is that the build up to their romance was very delayed. At the same time I get that the director really wanted us to see Elena’s background and let us know why this situation would be difficult for her. If you’re into non traditional romance movies and are tired of over the top hokey ones, this one would be a recommended watch.

One thought on “The E Word…For Elena Undone”