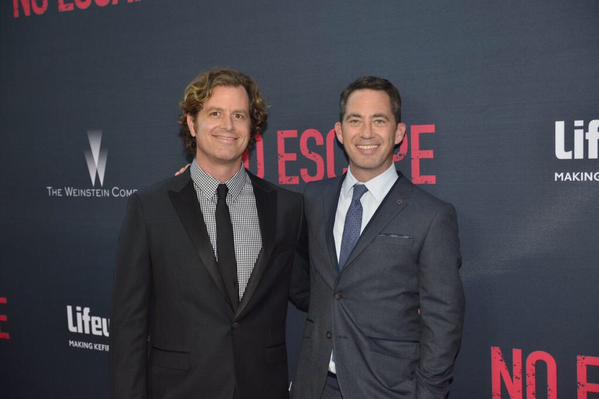 I had the pleasure of sitting down and chatting with John Erick and Drew Dowdle, the men behind the movie No Escape (available on Blu-ray & DVD). Below is the audio interview in it’s entirety. I spoke to the guys about the fear factor of the movie, the casting of Owen Wilson, and keeping up the tension in the movie, and a lot more!

I really enjoyed speaking to the Dowdle’s, really charismatic and down to earth guys. As soon as I walked into the hotel room at the Peninsula Hotel in Chicago where the press junket took place, I was greeted by the Dowdle’s offering me muffins and snacks that they had set-up in the room (which is a great way to establish a first impression if I say so myself). Somehow the last thing on my mind was that they were some sort of “Hollywood types”, which in reality is far overblown, considering a majority of the people in the industry I get to meet and interview are really good and down to earth people.

After muffins, the first thing I mentioned was how scary the movie actually was and they seemed to get a kick out of that. I found out later that it wasn’t their intention with the film to scare away people away from the idea of traveling abroad.

Drew stated “Our goal is always to make it very real, very authentic. I think that people buy into that reality and experience it with that family” while John Erick stressed the importance of not having the movie feel like a Hollywood action, “We really wanted this to not feel like a Hollywood action movie, where it feels more like we wanted this to feel like you are watching a friend of yours in a bad situation“.

I genuinely enjoyed the movie and people should really see it and try not to worry about traveling, as the message portrayed in the film is that of people rebelling against the loss of their livelihood’s due to foreign corporations taking over their economy. There is some really good acting in the film, the cast meshes together really well. I’m not trying to praise the Dowdle’s because I got a chance to sit down and meet them. I really feel thy are excellent filmmakers, they have a unique eye for building tension and suspense which was also evident in their films Devil and Quarantine.

No Escape is an intense tension packed thrill ride that will most definitely have you at the edge of your seat. Aside from the fear that you will feel for the Dwyer’s while watching, there is a fairly important economical,political, and cultural message that the Dowdle’s are trying to show. There are mindless thrillers, but then there is one like No Escape, which packs the heart pounding action along with an underlying message.

No Escape comes out on Blu-ray & DVD on November 24.