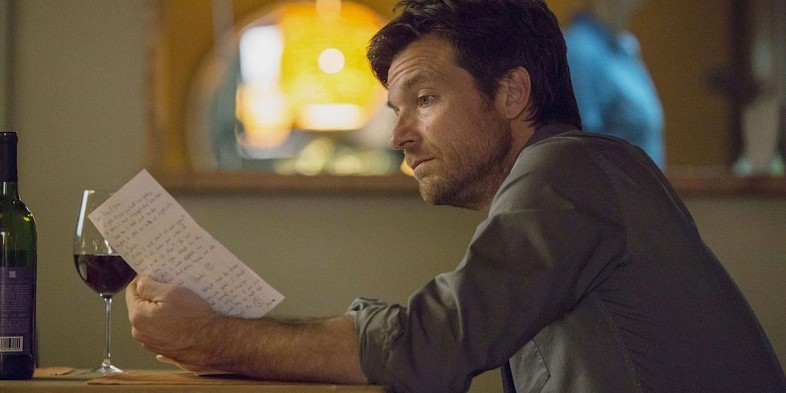 Synopsis: A married couple moves to Los Angeles to start over, when someone from the past arrives and sends their lives into chaos.

Joel Edgerton hit a jackpot with The Gift. Edgerton is fully in charge of this cinematic gift, he directed, starred, wrote the script, and even produced the movie. That’s called banking on yourself and hitting the jackpot. It is easily the best suspense thriller since Gone Girl, and it’s just as good as it, if not better.

Simon (Jason Bateman) and Robyn (Rebecca Hall) are a married couple that just moved to LA to get away from the painful memories (she lost a baby) of Chicago (Chicago isn’t that bad, I can vouch for that). Simon has a great job, Robyn is a stay at home wife at the moment, and they just moved into a really nice neighborhood with a beautiful home, seems like a pretty good fresh start, right? Not so much. While shopping, Simon comes across an old middle school “friend” named “Gordo The Weirdo” (Joel Edgerton), or at least that’s what he was nicknamed in grade school. A friendly dinner leads to a lot more frequent invited visits from Gordo. First it appears as if he’s just being a good friend who is trying too hard to welcome the couple into the neighborhood. Simon is suspicious of Gordo’s all too frequent appearances at their home. Robyn is the less skeptical and more naive one, she welcomes Gordo and shows him the house whenever he arrives. I sure would love to have a wife that welcoming to strangers..NOT! You can’t really fault Robyn, she’s still recovering from a horrific incident of having a miscarriage, and she seems like a genuinely kind person (it’s the midwest in her). Things start getting out of control as Gordo’s appearances are leading to some suspicious activities, such as the family dog goes missing. The suspicious activities escalate to the point where Simon takes matters into his own hands. A web of lies, deception, and secrets builds for Simon and the twists and turns ensue that leads you to question if Simon is really who he appears to be?

The Gift is a spectacular movie. I’m giddy just writing about this film. Edgerton really hits a home run with this movie. It’s beautifully crafted, from the sounds to the suspense, he guides you throughout the ride just like a flashlight would in a pitch black cave. His knack for creating tension is Hitchcock like, you can tell from Edgerton’s work on this film that he must be a huge Alfred Hitchcock fan.

The music plays an instrumental part in this film. Each thrill is intensified and set-up flawlessly by the eerie pulsating music in the background, you know something is going to happen, but not in the predictable horror movie kinda way, more like in the when and how sorta way. Horror movies have had a hard time nailing the instrumentals to match the scene, the last one that succeeded with this was The Conjuring. Even though The Gift isn’t a horror movie it’s more chilling and creepy than most of the horror movies being made. Edgerton should give a class on showcasing suspense and tension.

It’s not that easy to pluck out flaws with this movie, as it’s crafted so well, but there are a few things I would have liked to have been elaborated on. While each character has a great backstory built into them, I would have liked to seen more time devoted to Robyn’s character. Clearly she’s going though a lot. There is a mention and hint of her possibly being addicted to prescription drugs. Would have been good to delve into her past a little. Was that a reason that lead to her miscarriage? Did she start using prescription drugs after her miscarriage? How did she get off the drugs? None of these questions are really answered. Also, what prompted Simon to have the past that he did, and why is he the guy that he’s turned out to be?

This movie is mainly a three person story. Jason Bateman is dynamic as we’ve ever seen him before, in part due to Edgerton’s masterful writing and character development. You’ve never seen Bateman in a role like this. He’s funny, creepy, tough, caring, and mysterious, all in one. As a fan of his work, this might be his best ever performance, I’m including his work in Disconnect. Rebecca Hall is the most underrated actor in Hollywood, male or female. This is someone who has the chops of a Kate Winslet, yet she doesn’t get the recognition or roles she deserves. I’m still surprised that she never had her big break after being fantastic in Ben Affleck’s The Town. Might this be her breakout moment? Hope so. You can tell she understands her character and does a great job of playing someone who has gone through a tragic event in her life. She’s also so adorably naive and sweet. Just a spectacular actress. Bateman and Hall are a perfect pairing on-screen. Her scenes with Edgerton are innocent and borderline sweet. If you haven’t heard much about Joel Edgerton to this point, you should start hearing a lot more about him. He’s great in the movie. Edgerton plays a really intriguing creepy guy, that makes you feel more sorrow than disgust for him. Though you might feel both by the end of the movie. The tough part is picking what did he excel at the most in this film? The acting? Directing? Writing? I wouldn’t be surprised to see him direct more than act going forward.

The Gift is truly one of those rare edge of your seat thrillers and has your jaw drop. It’s compelling throughout, and the set-up is paced perfectly. The reveal and twists comes much later in the movie, but you aren’t even thinking about that due to the clever and intriguing build. The mood is spot on. The bright daylight scenes are just as chilling as the ones that happen in the dark of night. Hopefully what doesn’t go overlooked is the message of the movie. The film depicts some real life issues such as bullying, loss, abuse, the power of words, forgiveness, and regret. It is all bundled up into one shocking conclusion. It is hard to pick something bad about this film, it’s genuinely terrific. Great performances, great writing, and exceptional directing. Wouldn’t be surprised at all if this film finds it’s way into the Best Picture category come Academy Awards time. The thing that makes it chilly, eerie, suspenseful, and creepy is that you can actually believe that this could potentially happen in real life, minus a couple factors, but there is a lot of relatable content. The Gift is a must see gift you deserve to give yourself.

A Gift That Keeps Giving

2 thoughts on “Review: “The Gift” is a Gift You Won’t Forget”